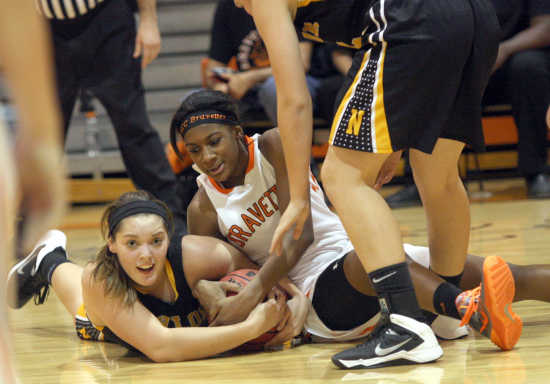 SIKESTON -- In what could be a prelude to a possible postseason matchup, the Scott County Central Bravettes fell short of their Class 1 counterpart.

Naylor, the defending Class 1, District 1 champions who were one win away from making the state semifinals last season, took down the Bravettes 53-34 Thursday at Ronnie Cookson Gymnasium at Scott County Central High School. 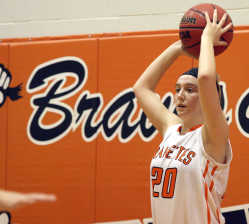 "It shows we have a lot of work to do," Scott County Central head coach Matt Limbaugh said. "We had expectations coming into the season and we're still a ways from where we need to be."

This was the first time the two had met each other since late last season when the Lady Eagles ended Scott Central's postseason run in the Class 1 Sectionals at Bloomfield.

"We remembered how they were last year," said Naylor head coach Gene Deckard. "We knew we had to contain, box out and keep them off the boards. At certain times we could pick our pressure points and I think we did a good job of that."

The two played to a 13-13 stalemate at the end of the first quarter, but Naylor went on to outscore the Bravettes 16-6 in the second to hold a 29-19 lead at the half.

The offense generated by Scott Central went cold in the second half scoring 15 points in the final two quarters combined. They shot 34 percent (12 of 35) for the game. 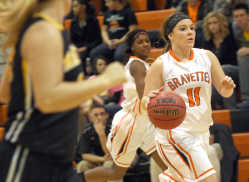 "Something you have to preach against a good team like Naylor is to move the ball around and keep their defense on their toes," Limbaugh said. "We didn't do a very good job of that. Credit Naylor's defense. They played very well for everything that we threw at them."

Naylor, on the other hand, continued patience and pounded the ball inside. Pruett, who scored eight points in the first half, added five in the third and fourth quarters. Charity McCoy scored all seven of her points in the second half.

"The girls adjusted," Deckard said. "The longer the game went along, the better they adjusted. I think that was the key."

Naylor (1-1) went ahead by 12 points by the end of the third quarter, but pushed that lead to an insurmountable one by rattling off a 12-1 run to start the final period.

"We just didn't execute and make the plays we needed to, to be in the game late with a good team like Naylor," Limbaugh said. "We didn't move the ball around very well on offense. We settled for a lot of one pass-and-shoot."

If history repeats itself, the two will meet each other again later in the postseason for another Sectional contest. Scott County Central won it's first district championship since 2008 last season only to lose to Naylor in their next playoff game.

"The competition you have to face to advance in Class 1 is right there," Limbaugh added. "They're there every year and there's a reason for that. We have to somehow find that second gear that gets us going."