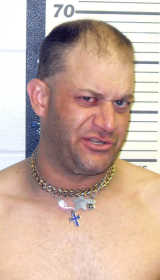 CHARLESTON - An East Prairie man who led law enforcement officers on a chase, traveling at more than 100 miles per hour, isn't going any where now.

Harold Matheney, 36, is in custody on charges of resisting arrest following his arrest.

According to Charleston Department of Public Safety Director Robert Hearnes, an officer attempted to to stop a vehicle at about 10:30 p.m. Saturday on South Elm Street in Charleston.

"The driver failed to stop and sped away," Hearnes said in a press release. "The driver fled out of town traveling south on Highway 105, at times driving in excess of 100 mph."