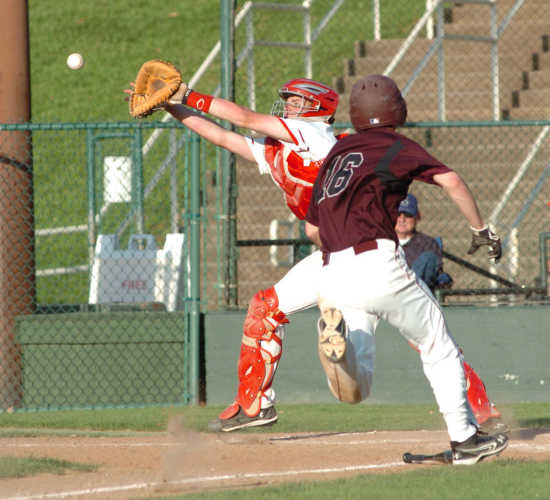 Sikeston catcher Blake Wolferding takes a throw from the infield as Poplar Bluff runner Jared Moses comes home for the game-winning run on Monday in the SEMO Conference Tournament third-place game. The Mules won 11-1 in five innings via the mercy rule.

CAPE GIRARDEAU -- After coming dangerously close to reaching the title game this weekend, the Sikeston Bulldogs had to settle for fourth-place in the SEMO Conference Tournament.

Taking on Poplar Bluff in the third-place game Monday, the Bulldogs surrendered a nine-run second frame en rout to an 11-1 loss in five innings via the run rule.

"I thought we had something going there in the first inning," Sikeston head coach Alan Scheeter said. "We got a run quick and if you get a run quick off a good pitcher like Brandon Stuckenschneider is, maybe that will give you a little bit of momentum.

"They came right back on us. We had trouble throwing strikes today. The strikes we did throw, they hit hard and before you know it it's 9-1." 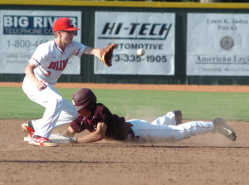 As Scheeter mentioned, the Bulldogs were able to strike first when a sacrifice fly from Adam Kennard plated Doug Still in the top of the first. They'd hold the Mules quiet in the home half of the first, but paid for it when Poplar Bluff broke loose in the second.

Poplar Bluff totaled five hits, four walks and a pair of hit batters as part of a nine-run rally to break the game open, 9-1.

Another Mule run in the third put Sikeston one run away from a mercy-rule loss, but the Bulldogs put up a stand in the bottom of the fourth to stay alive. A one-out triple from Wesley Pyles left Poplar Bluff 90-feet from taking a 10-run advantage into the top of the fifth.

Sikeston relief pitcher Sebastian Matos was able to secure the final two outs, however, with no damage. The Bulldogs went scoreless in the fifth, giving the Mules one more shot to end the game in five frames.

A hit batter to start the inning allowed Jared Moses to reach base before stealing second and moving to third on a passed ball. Matos was able to secure a strikeout for the first out before a hard hit grounder to the third baseman sent Moses home.

The third baseman attempted a play at the plate, but Moses slid home untouched for a walk-off win. 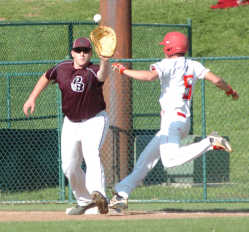 Sikeston runner Sam Cox tries to leg out an infield single as first baseman Logan Misner takes a throw from the infield. Cox was called out on the play.

"The third place game is always tough to bounce back to," Poplar Bluff head coach Stan Bullington said. "The guys did a great job putting together a lot of hits and played well. We hadn't put together a big inning like that (second frame) in awhile so that was fun."

Though Matos and starting pitcher Chase Gaines admirably filled on the mound, the Bulldogs were noticeably without the services of one of their top pitchers in Gavin O'Brien. O'Brien has been forced to miss all of this year's SEMO Conference Tournament as he attends an academic trip.

"If he'd been around, today would have been his day in the rotation," Scheeter said. "He's not here so we made do with what we have. I told Chase, go out there and give it all you have. You're a lefty and they have a couple good lefty sticks.

"He just didn't really have it today. Sebastian came in and threw okay. He struggled with control a little bit too, but in the situation he was in, you can't take runs off the board. He did his best to minimize the damage after that."

The Bulldogs were led by Doug Still, who went 3 for 3 at the plate with a run scored while Colton Hampton contributed a single.

Sikeston will have plenty of opportunities this week to end their current two-game losing streak when they play four games in as many days.. They'll host Oran Wednesday at 4 p.m., followed by road trip to Dexter on Thursday.

They wrap up their week at Graves County and Marshall County on Friday and Saturday respectively.