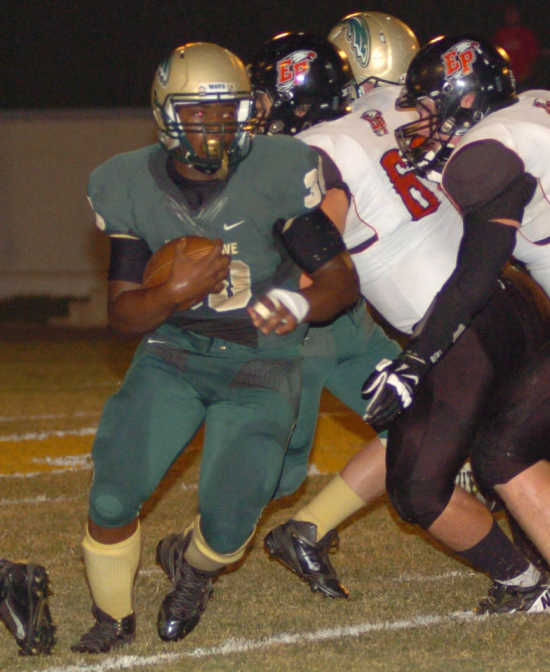 MALDEN -- Just as impressive as Malden's undefeated start to the year has been how they've done it.

Nearing the midway point of the season the Green Wave have dominated the opposition in winning by an average of 46 points per game, including a 71-8 drubbing of Scott City last week.

Those statistics at least put East Prairie in good company after they became Malden's fifth victim on Friday in a 55-6 loss where they managed only 97 yards of total offense.

"Malden is a great football team and we saw that firsthand tonight," East Prairie head coach Chad Jamerson. "I'm real proud of our guys for still fighting. We fought until the end. We weren't going to back down. We were going to fight and we gave them all we could. Unfortunately tonight our best wasn't as good as theirs."

Against the Eagles, Malden totaled 459 yards, spreading them out evenly with 226 yards on the ground and 233 through the air. They ran a total of 34 plays for an impressive 13.5 yards-per-play average.

By halftime the Green Wave all but ensured a turbo-clock win, having already racked up 403 yards and scoring on every possession to take a 49-0 lead. They snapped the ball 23 times on offense in the half, averaging a touchdown every 3.2 plays.

"They're a hard team to attack defensively," Jamerson said. "Coach (Joel) Wyatt does a great job of coming out with a million different formations. They have weapons galore and they're big up front. At times it felt like when they were on offense or defense they didn't have 11 (players), it felt like they had 14 or 15."

No one exemplified the Green Wave's explosive night more than Cortez Dobbins.

The junior touched the ball four times, two catches and two runs, and the results were four touchdowns and 167 yards.

Dobbins turned a short pass from quarterback Chapen Riley into an 85-yard touchdown later in the quarter before ending the half with a 47-yard touchdown from Riley to put the Green Wave up 49-0 entering the half.

"He's a big-time difference maker," Malden head coach Joel Wyatt said of Dobbins. "He's special and just has another gear. Now he's making these runs that he didn't quite make in week one and week two. He just didn't quite have a feel for it. Now he's getting more confident and letting his instincts take over."

While their offense soared, scoring on every possession in the first half, Malden's defense stymied the Eagles' attack. Though they only had one turnover in the game, East Prairie wasn't able to pick up their first, first down of the game until their final drive of the first half.

Jamerson credited the Green Wave's line with keeping his offense from using it's speed like it had in winning three of its first four games.

East Prairie was held to 14 first half yards.

"I really feel and I think their coach agrees that up the middle they're the best," Jamerson said of Malden's defense. "Their two defensive tackles, inside backs and their free safety are five of the best players in our conference. I felt like if we could attack the perimeter and maybe get some things rolling there that maybe we could do some things.

"We came out early and tried to throw it to the edge, but we just couldn't get the big play on the edge because they're so fast to the football."

Much of East Prairie's yardage came in the second half when they were able to break up the shutout.

With the mercy clock running the Eagles started their first drive of the half at their own 34-yard line midway through the third quarter and capped it in the opening minute of the fourth.

It was senior Adrian Soto's four-yard run on a sweep into the right corner of the end zone that capped the 64-yard drive and made up the 55-6 final with 11:53 to play.

For Malden, it's the fourth straight game where they've allowed a touchdown or less with many of those scores coming against the junior varsity unit late in the game.

"We thought coming in that was the strength of their team, their speed," Wyatt said of the Eagles. "They're conference champs in track and all their kids that ran our football players. We knew that speed wise it was pretty even, but we thought we kind of had an edge in the trenches.

"I thought we contained them really well. (Assistant coach Kevin Collier) had a solid scheme and our (varsity) kids are really striving on this theme of not being scored on. They feed off that."

Behind Dobbins, senior Dremond Robinson had 136 yards on 9 rushes and two scores for a 15.1 yard-per-carry average. Before being taken out early in the second half, Riley, a junior, completes 5 of 6 passes for 183 yards and three scores.