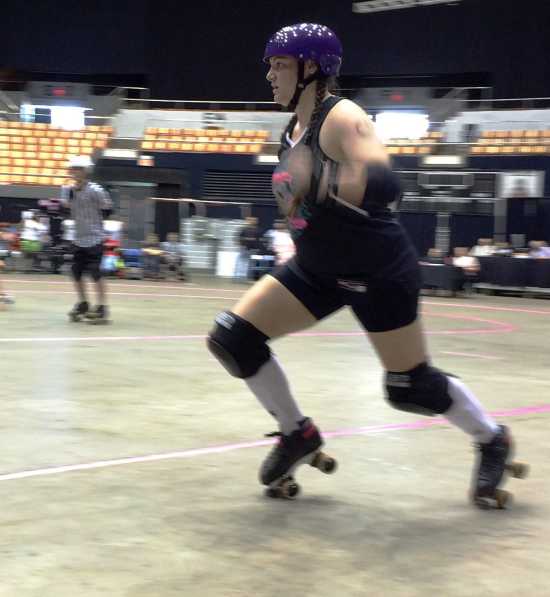 DeArman performs a tomahawk stop, which involves quickly turning to skate backwards, sliding on the skates' toe stops, and sprinting in the opposite direction. Kristin Simon photo

DEXTER - "I was a hyperactive kid, bouncing off the walls at all times," says DeArman. "If mom would let me sign up for a sport, I wanted to do it. Dexter didn't have a lot of sports for girls back then but I was into everything: soccer, track, tee ball, softball, volleyball, and basketball. I really enjoyed softball, but in middle school and high school the emphasis got put on volleyball."

DeArman discovered she was a good jumper and began playing as a middle hitter. She earned awards, including spots on all-county, all-district and all-regional teams, and MVP for offense within her team couple years in a row. She was also chosen for an all-star team for southeast Missouri.

During her senior year she developed knee issues which required surgery. The recovery time dashed DeArman's hopes of playing collegiately. She tried intramural volleyball in college but found the lack of competitiveness frustrating. She also played a season of ice hockey but once again her knee issues held her back.

In the summer of 2010 she looked into roller derby on the suggestion of a friend and discovered that open enrollment for the Springfield Roller Girls was in 2 weeks.

"I showed up and there was no air conditioning in the facility and it was so hot. I was immediately on board, even though I was a terrible skater," DeArman says with a smile. "The new girls started skating around in a circle, trying not to murder ourselves and others. Over on the other track, there were girls going all out and smashing into each other and turning around backwards. I could skate forward and stop--and I wasn't necessarily that good at either--but I was determined. I was at the skating rink regularly to practice. I even took out a loan on my 401K so that I could buy all my gear."

A few months later DeArman was allowed to participate in her first scrimmage.

"The vets were targeting me. I could hear them locking onto me and coming in like a missile from across the track. I didn't have the agility to move out of their way, so all I could do is bear down and grimace. It was a full hour of that. I loved it. I loved having the crap beat out of me. I loved knowing that no one was malicious about it; they did what they needed to do for their team to win. It was so much fun to know that I could get knocked down and get right back up and keep having fun," DeArman recalls.

In 2011 she moved back to the Bloomfield area and transferred to the Cape Girardeau Roller Girls. By that time her skill level had improved drastically and in just a couple of months she was invited to be on the team's training committee. When the head of training resigned, DeArman was chosen for the position, which includes developing drills to strengthen the team's skills.

DeArman is an avid strategist.

"In real life I don't like rules, but when it comes to sports I want to know every single rule and guideline so I can exploit them. The rules in this sport are always changing. There are lots of opportunities for you to know the rules better than the opponent and I'm a big fan of shoving the rules down their throats and laughing in their faces," says DeArman enthusiastically.

The upcoming State Wars tournament will bring together the best players in each state and pit the states against each other, so DeArman is excited to compete at the extremely high level.

"It will be a competitive level and high intensity without the pressure of disappointing your home team," she says excitedly. "It's going to be a lot of fun!"