NMCC scorches Dexter from outside 83-68 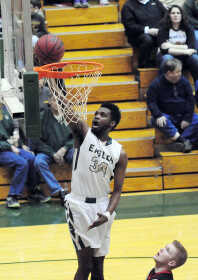 "Our goal was to come out with a lot of energy, playing our style," Day said. "I knew their defense was going to pack it in the paint on Willie (Jimerson). We told our shooters 'have your hands and feet ready and if you are wide open let it fly.'"

The Eagles let it fly frequently in the first half and connected often leading to an 83-68 win over Dexter.

"They fell for us early," Day added. "That helped us get our energy up more and we started playing hard on the defensive end, which is how we were able to build that lead up one them."

Dexter put together its own 3-point show after halftime as it drained seven treys.

The hot shooting helped the Bearcats outscore the state-ranked Eagles by 11 points in the second half but NMCC hung on for the home win.

"I was very proud of how the kids battled back in the second half," Dexter coach Josh Dowdy said. "Real proud. It would have been easy to quit and we did not do that tonight. Tyler Heil came in and gave us some big minutes. I have been coaching for 10 years and have been around quite a few kids and there is not a better teammate than that young man. His actions on the court are the epitome of a great teammate. I am just glad he had a chance to shine and he did with some big blockouts, a charge and a stickback."

NMCC displayed its vast arsenal of offensive weapons from get-go to finish. At least five players scored for the Eagles in every quarter as nine NMCC players finished the contest with at least one made field.

Other NMCC players nearing double digits were Drew Palmer who managed nine points on three treys, and Kiel Causey and Javarcus Word, who both scored eight points on a pair of two-pointers and a trey.

"That's kind of our style," Day said of his team's offensive production. "Willie is our head guy, but we usually have a lot of guys contribute night-in and night-out. We are good about sharing the ball and our style allows for a lot of people to get their hands on the ball.

Dowdy added on defending NMCC: "Our goal was to make them shoot over the top of us. Unfortunately, they were eight of 11 behind the arc in the first half. I do wish we would have contested a little bit more, but you have to pick your poison against a team like NMCC. If you go out and guard them they are more than capable of getting to the rim."

Ethan Flowers hit half of Dexter's eight treys. He finished with 16 points.

"We were also able to run a few things offensively in the second half that I feel will make us better down the stretch," Dowdy said. "I believe it is worth noting the way Coach Day handled the game. There were some times where he could have kept his foot on the gas and he didn't. That shows a lot about his character and NMCC as a whole."

No. 3 seeded Dexter returns to action Monday at 8 p.m. when it takes on sixth-seeded Puxico in a quarterfinal contest of the SCAA Tournament at Bloomfield.