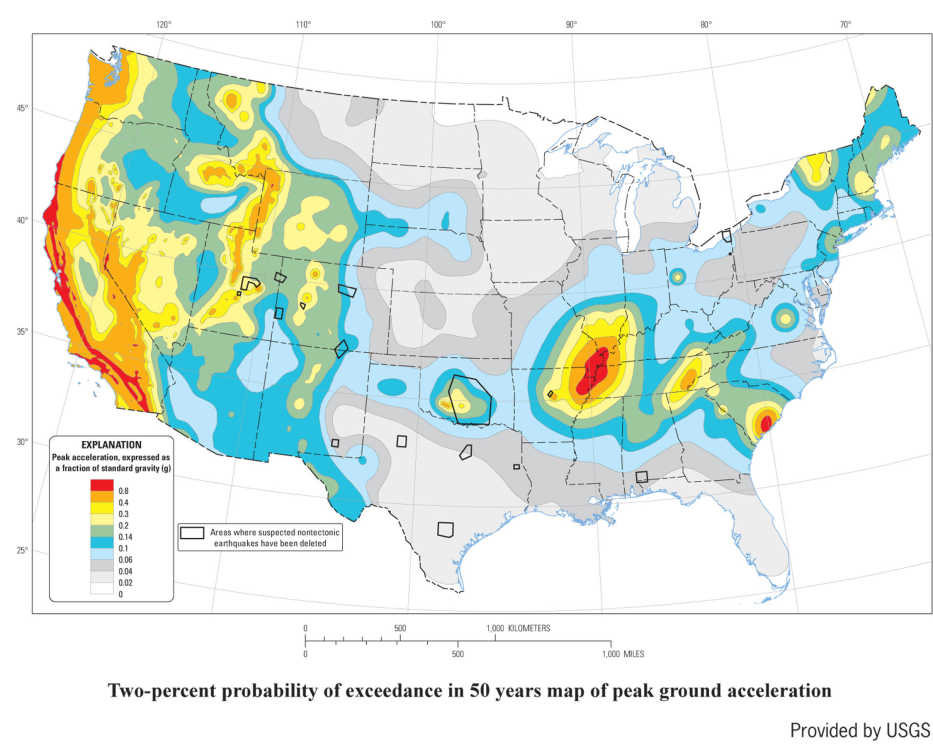 The chances of the New Madrid "big one" rocking the area may be greater than previously thought according a recent update of the US Geological Survey's (USGS) National Seismic Hazards Map.

The updates reflect the USGS's best and most recent understanding of when and where earthquakes are likely to occur and how intense they might be. The map was previously released in 2008 and shows earthquake potential across a 50-year period.

According to an updated USGS report, "the New Madrid Seismic Zone has been identified to have a larger range of potential earthquake magnitudes than previously identified."

Emergency Management Agency Director Jeff Shawan says the report and others like it paint a grim picture of life in southeast Missouri if the New Madrid monster quake does occur.

A 1985 (FEMA) report makes estimates for Poplar earthquake of $693 million in damages, 1 death if the quake occurs at night or 17 deaths if it occurs during the day when school is in session. Areas closer to the fault will suffer even more damage.

"If this event occurs, lives in Southeast Missouri and the Bootheel as we know it will change probably for a generation. We are talking about massive destruction of infrastructure. I'm talking about a major quake 7.5- 8 on the Richter scale," Shawan said.

Scott, Stoddard and Dunklin counties estimates are up to one percent killed and from one-half to five percent of the population seriously injured, according to FEMA.

Poplar Bluff would serve as the center of regional operations for FEMA and the State Emergency Management Agency (SEMA) in the event of a mega quake due to its location west of Black River and the liquefaction zone, according to Shawan.

"There are FEMA plans in place to respond to a very large event. If we have the big event the I-55 corridor is to some extent going to be destroyed so transportation is a big deal. "SEMA has plans to arrive in Poplar Bluff that includes multiple routes to get here and has the capability to build temporary bridges in the event bridges are crushed. But the plan is to come to Poplar Bluff to respond to the needs of the region," Shawan said.

While no one can predict the time, date, place of a potential mega-quake, Butler County Emergency Management says such an event is always on the minds of the area's emergency planners.

"At a local level I am constantly encouraging the public to prepare for the possible event. We need to be prepared. The ability to provide public water, electricity -- those things will be damaged in a way that they can't be recovered in a matter of days."

The new map and other information on seismic events can be found at earthquake.usgs.gov. The website ready.gov provides an extensive guide on what to do before during and after and earthquake.

According to the Missouri Department of Natural Resources, the New Madrid Seismic Zone, located in southeastern Missouri, northeastern Arkansas, western Tennessee, western Kentucky and southern Illinois, is the nation's most active seismic zone east of the Rocky Mountains.

The zone cuts across the Mississippi River in three places and the Ohio River in two places. More than 200

small earthquakes occur in the region each year.

February is Earthquake Awareness Month in Missouri and Feb. 7 was the anniversary of the 1812 earthquake.

The 7.7 magnitude quake is considered to be the largest in post settlement