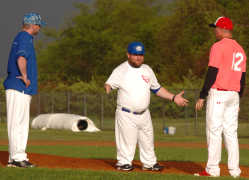 Charleston head coach Michael Minner (center) talks with Sikeston head coach Alan Scheeter (right) and Charleston assistant Ryan Ford (left) in the rain before the start of the two team's annual Pink Out game Tuesday at Hillhouse Park in Charleston. The game was postponed in the fifth inning due to rain and will resume at a later date. (Brent Shipman photo)

CHARLESTON -- With storm fronts moving in just over an hour apart, Charleston and Sikeston came a half-inning short in their bid to get in the required five innings Tuesday afternoon at Hillhouse Park in Charleston.

Sikeston took a 3-0 lead into the top of the fifth where a sudden downpour caused a stoppage in play, leaving the two squads to pick back up at a later date.

The teams were taking part in its annual Pink Out game, which benefitted the SEMO Challenger Baseball League this season. Both teams donned pink on their uniforms and stuck with wooden bats for the contest.

Bulldog hurler Chase Gaines held Charleston to just two hits through his four innings of work. He allowed a single to Bruce Simmons to leadoff the bottom of the first while Brandon Grimes got the other hit, another single, in the third.

Gaines struck out the side in the fourth and collected six strikeouts on the game. He walked one and hit a batter.

"Chase threw the ball well," Sikeston head coach Alan Scheeter said. "He didn't start the first batter real sharp, but after a hitter or two he started getting sharp and getting really comfortable there in the last couple innings."

His counterpart, Simmons, was nearly effective with some defensive miscues hurting his cause as the Bulldogs rallied for three runs in the second inning. 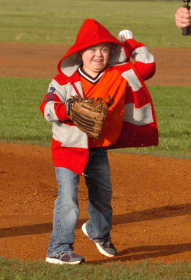 SEMO Challenger baseball player Carter Kuntze throws out the first pitch before the Pink Out game between Sikeston and Charleston Tuesday at Hillhouse Park in Charleston. (Brent Shipman photo)

With runners on first and second with two outs, Audie Hay hit a line drive down the third base line to plate the first run of the contest.

Sam Cox followed up with a ball to left field that the left fielder misjudged, giving Cox a double and allowing two more runs to score. A groundout to the second baseman ended the threat.

"We come in at 1-7 and playing one of the better teams in the area," Bluejays' head coach Michael Minner said. "I thought Bruce was tremendous on the mound. He mixed it up and (we have) two fly balls that have to be caught in high school baseball. If we catch those it's 1-0. It's 3-0 heading to the fifth with a good baseball team who's won some games. I'm really pleased with our guys and I thought we made some strides."

The Bluejays caught a break when a wet start to the fifth frame led to five runners that will come off the board due the the half inning not being finished.

An error and a free pass helped Sikeston load the bases without an out before another walk forced in a run. As the rain poured a fielding error by the shortstop brought home another run and another walk made it 6-0.

Cody Rodgers hit a two-run single to bring in another two runners and make it 8-0 before the umpires converged to discus the weather. After the meeting, the game was called with still with no outs in the inning and runners on second and third.

With the fifth inning being wiped from the books, Cox's two doubles led the way for the Bulldogs.

Luke Williams picked up a double and drew walk to reach twice while Hay doubled and Trey Smith singled. Rodgers reached twice, drawing a walk and getting hit by a pitch.

"We didn't square the ball up the way we needed to," Scheeter said. "We started hitting a little bit later and they made a couple miscues, but we need to hit the ball harder than that."

The two coaches will talk later this week to discuss a time to pick back up in the fifth inning, at 3-0, and finish the contest.

Sikeston (6-5) will host East Prairie Thursday at 4:30 p.m. while Charleston (1-7) will also be in action Thursday, hosting Saxony Lutheran at 6 p.m.