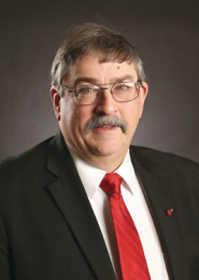 CAPE GIRARDEAU -- Southeast Missouri State University Provost William Eddleman announced today that he will step down as the university's chief academic officer effective June 1, 2015, and return to the faculty until Jan. 1, 2016, when he plans to retire from the university.

A professor of biology, Eddleman was appointed provost in November 2013, and began his duties as provost Jan. 1, 2014, after serving as vice provost and dean of the School of Graduate Studies and chair of the Department of Biology.

"Being provost has been the most rewarding aspect of my 21-year career at Southeast Missouri State University, but at the same time, it has been a challenging position that required tremendous effort and focus," said Eddleman. "I am looking forward to returning to the classroom. Since I plan to retire at the end of this calendar year, I felt that our new president, Dr. Carlos Vargas, should have the opportunity to begin the provost search process as early as possible."

The Provost is Southeast's chief academic officer and is responsible for eight colleges and schools: Donald L. Harrison College of Business; College of Education; College of Health and Human Services; College of Liberal Arts; College of Science, Technology and Agriculture; School of Graduate Studies; School of University Studies; and the Earl and Margie Holland School of Visual and Performing Arts.

"Being provost at Southeast Missouri State University," Eddleman said, "was an extraordinary and gratifying experience. I appreciated the opportunity to serve at Southeast and I am truly grateful for an opportunity that allowed me to work with outstanding faculty, staff and students." In addition to spending more time with family, including his impending grandson, Eddleman said he is looking forward to "returning to being called professor."

Southeast President Kenneth W. Dobbins said he accepted Eddleman's reassignment and retirement plans with mixed emotions, and said, "Bill's dedication to our students, faculty and staff is unsurpassed. I am sorry to see him leave the leadership team, but our students will certainly benefit from his return to the classroom, and I can personally understand his desire to retire and spend more time with his family."

In addition to serving as provost, Eddleman served as vice provost and dean of the School of Graduate Studies at Southeast from June 2011 to January 2013. He previously served as chair of the Department of Biology from August 2003 to June 2011. He joined Southeast as an assistant professor of biology in 1995 and was promoted to professor of biology in July 2001. He served as Faculty Senate chair in 2001-2002, and chaired the Southeast in the Year 2020 Committee in 2010-2011.

Eddleman has been active in the Boy Scouts of America for many years. He currently serves as an adult staff member of the National Youth Leadership Training Camp and as a merit badge counselor. He is a former scoutmaster. In 2009, he was named a recipient of the Silver Beaver Award, the highest award given to a volunteer Boy Scout leader.

Faculty elections for representatives to serve on a provost search committee will begin immediately with candidate interviews to be held in the fall. According to Dobbins, a new provost is expected to be in place by Jan. 1, 2016.