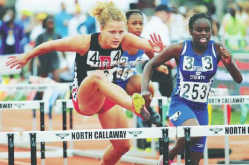 MaKayla Waldner earned all-state honors in four events at the Class 3 state track meet winning a state championship in the 300-meter hurdles. She also led her tennis team with a 13-5 singles record. Waldner has verbally committed to play soccer, a sport not offered at Dexter, for Mississippi State University. (Photo by Ben Striker/SEMO News Service)

DEXTER -- In a time where young athletes are encouraged to focus on one sport exclusively if they want to excel, Dexter junior MaKayla Waldner has bucked the trend.

Not only has the soon to be senior tried almost every sport her school has to offer, she's excelled at every stop. Coming off a stellar junior campaign that included a state championship in track, Waldner has been selected as they Standard Democrat Female Athlete of the Year.

Though Waldner finished her tennis season with a team-best 13-5 singles record and a trip to the Class 1 sectionals, it was on the track where she shined brightest. As one of the two competitors Dexter sent to the Class 3 state championship meet, she single-handily beat out all but five teams by compiling 30 points.

Waldner's efforts left her just one point shy of earning her school fourth place and the trophy that goes with it as she competed in the maximum allowed four events.

After placing fifth in the long jump, Waldner took second place in both the 200-meter dash and 100-meter hurdles with times of 25.92 and 15.44 seconds, respectively. Her effort in the hurdles was just .19 seconds off the lead.

The highlight of her weekend came in the 300-meter hurdles where her time of 42.89 seconds won her a state championship by a full second.

"I got second last year in 300 hurdles, so that was kind of heartbreaking," said Waldner, who earned all-state honors in all four events. "I decided I wanted to be a state champion this year. After my brother Trevor became a state champion in wrestling his senior year it kind of motivated me to push hard and try to live up to the family name I guess."

Beyond Trevor's actions in winning the Class 2, 138-pound wrestling championship the year prior, Waldner credits a conversation with her brother during the meet with providing a little extra motivation.

"It was really nice because I ended up getting second in the 100 hurdles and my brother texted my afterwards "Mack, you have to go out there and get first'," MaKayla Waldner said. "I can't be the only state champ in the Waldner family. It was a little bit of a motivation. During the race I go blank out there and don't think about anything but I remember on my last hurdle I was thinking 'Okay Mack, you got this, but you can't fall on this hurdle. I was psyching myself out I guess. I ended up finishing about three-tenths of a second away from the (Class 3) record. I guess that's what will be pushing me next year is to try and get that record."

MaKayla Waldner earned all-state honors in four events at the Class 3 state track meet winning a state championship in the 300-meter hurdles. She also led her tennis team with a 13-5 singles record. Waldner has verbally committed to play soccer, a sport not offered at Dexter, for Mississippi State University. (Brent Shipman/Standard Democrat)

Waldner's junior year accomplishments, which include Semoball Award nominations for both tennis and track, just added to her already impressive athletic resume since she started high school.

As a sophomore she worked her way into the starting rotation of the Lady Bearcats basketball team that fought its way to the Class 4 state championship game and a 27-4 record. That same fall Waldner broke the typical gender barrier to become the football team's placekicker. Waldner credits her family's competitive nature with her desire to continually seeking out new challenges.

Besides her brother being a state championship and two-sport athlete in high school, both of Waldner's parents played college sports competitively.

"Growing up in the Waldner family everyone is expected to be athletic," Waldner said. "I was playing tennis and during the summer and the football coaches, who I've always been close to, came over and didn't have a kicker. They asked 'Hey Mack, could you come out and try to kick for me?' They said we don't have a kicker and we know you play soccer. After tennis practice I walked over to the football field and all the players are lined up behind me like, 'Okay, let's see how good you can kick'. On the first day I kicked like a 30-yard one, so I already beat out the replacement kicker."

It's a little ironic that after becoming a varsity starter on four different teams at Dexter, the sport Waldner is arguably best at isn't offered at her high school. That would be soccer, which Waldner took up in first grade and has competed on travel teams ever since.

"My best friend's dad started me out playing soccer when I was in first grade," Waldner said. "He was a big soccer fan and me and his daughter, Julia Hahn, were so close I was basically his second daughter. We went over to Sikeston and started playing. We stuck playing together until about eighth grade. At that time I realized I really enjoyed soccer and could see myself playing for a long time."

Without a school program, Waldner has spent her time joining teams from around Cape Girardeau all the way to the St. Louis area. In recent years she's been playing with a team out of Collinsville, Ill., in the Elite Clubs National League.

She recently completed a trip playing in the Elite Games, a national tournament in Seattle, Wash., where her team took third place after losing in double overtime in the semifinals.

MaKayla's mother Kim Waldner, who is also Dexter's head track coach, said while the commuting during the school year hasn't been easy, it's been worth it.

"She's been around, but she's finally found a home," Kim Walder said. "She goes out there and trains two times a week. She leaves school, goes to tennis practice and then goes up there. Her and another girl from Saxony Lutheran share a ride. She gets home around 11:30 p.m. or whatever at night and gets back up." 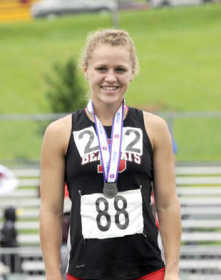 MaKayla Waldner earned all-state honors in four events at the Class 3 state track meet winning a state championship in the 300-meter hurdles. She also led her tennis team with a 13-5 singles record. Waldner has verbally committed to play soccer, a sport not offered at Dexter, for Mississippi State University. (Photo by Ben Striker/SEMO News Service)

Even without the recognition a high school program offers, Waldner's success on the soccer travel circuit has been more than enough to get the attention of colleges.

She gave her verbal commitment to Mississippi State University early during her junior year and gave up basketball and football to preserve her health for her three primary sports.

"I really didn't want her to verbally commit this early," Kim Waldner said of Makayla's decision before her senior year. "But she said, 'You know, this is one thing I don't have to worry about,' which is true."

MaKayla's at peace with her quick decision as it allows her to focus on playing and not on impressing scouts and possible future coaches.

"My friends are filling out college applications hoping they get accepted. I'm thinking I don't have top worry about this and 'What are you guys stressing about?'" Waldner said jokingly. "They kind of get mad of me. It's so nice to be able to go to tournaments and I see all the coaches sitting on the sideline and I don't get nervous anymore because I know where I'm going and I know where me future is at."

With her collegiate plans already set, Waldner can spend her final year at Dexter focused on personal goals and lifting her already high standards she sets for herself.

"I wanted to make it to state in tennis," Waldner said of her goals. "I don't know how realistic that is, but with the way me and (tennis head coach) Kirk Lovelady go out and practice I feel like anything is possible. We're getting new players out and hopefully I can team up with some doubles partner and we can be really good.

"For track I just trying to train as hard as I can for my last season and live up to what I did last year. It'd be nice to come away with two state medals this year in both hurdle events."