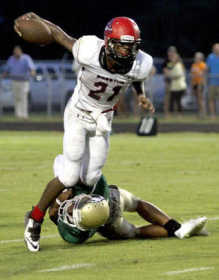 SIKESTON -- There's not much free time in the life of Earnest Fobbs.

The Sikeston junior balances three sports that starts in the fall and ends in the spring with summer workouts, camps, shootouts in between.

So much for video games, tablets and endless phone-staring by the pool.

Fobbs is a throwback to multi-sport athletes in a time of specialization and dwindling interest, playing football in the fall, basketball in the winter and then track in the spring. He's also the type of athlete that can do well in any setting.

Just ask his many coaches.

"I tell you what, there's not a lot of three-sport athletes anymore," Sikeston head football coach Kent Gibbs said. "A lot of people think you have to specialize in one sport to be good. Earnest is the opposite of that and he works very hard. I think a lot of times people become jealous of guys like that and look at them differently. One common denominator is that they all work. I could see him being successful in anything."

Terry Flannigan, Sikeston's former head track coach and defensive coordinator for the football team, got the chance to coach Fobbs in two of his sports. Flannigan said Fobbs could do five different events in track and play multiple positions on the football field.

"You're fortunate to have a kid like that," said Flannigan, who recently left Sikeston to coach eight-man football, weight lifting and teach physical education in Kansas. "Especially, today's-type kids, they only want to do one thing. He wants to contribute everywhere. That makes it easy for you."

Fobbs' basketball coach, Gregg Holifield, agrees he could excel in just about any sport, but the thing that separates the Class 4 runner-up in the triple jump and 1,000-yard rusher is his attitude towards the sports he plays.

"He always shows up ready to work and does a lot of good things," said Holifield. "I'm certain the other coaches in his other sports feel the same way. He's just a pleasant player to be around. I think he has the chance to really have a great year this upcoming year."

Though busy, Fobbs wouldn't have it any other way. He doesn't look at playing multiple sports as a duty but as a way to enjoy the things he loves and keep his body prepared as he jumps from sport to sport.

"I see people shifting to one sport," Fobbs said. "They think if they're dominant in one sport focusing on that one sport will help them go to college. But really, coming out of one sport and into another sport actually keeps you in shape. That's why I really strive to do something in track.

Fobb's first love is on the gridiron. 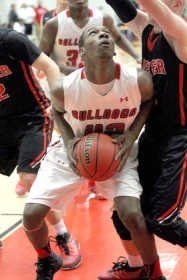 The 6-1, 179-pound running back/linebacker was a SEMO All-Conference selection on both offense and defense and an All-Region first team member after leading Sikeston with 1,022 rushing yards and nine touchdowns on 168 carries, which was good enough to put Fobbs 16th on Sikeston's all-time single season rushing list. He also led the team in tackles with 114 (81 solo), 13 tackles for loss and three sacks from his inside linebacker position.

"He's a very unselfish player," Gibbs said. "We mentioned he might have to do something different this year with some of the changes we made and he instantly told us he would do whatever he needed to do and that's what he did. There's not a lot of asking 'Why' with Earnest. He's a 'yes sir' and 'no sir' type of kid and goes about his business."

Fobbs was half of the Sikeston duo that each ran for 1,000 yards in Sikeston's new approach to offense. The 'double-wing, double-tight' formation gave ample chances for Fobbs and teammate Victwon Riley to run the ball for the 6-5 Bulldogs. Riley topped out at 1,005 rushing yards making it the third time two players have rushed for 1,000 yards in the same season for Sikeston.

"Me and Victwon have been playing since junior high and we never really learned any other format," said Fobbs. "Coming into this year we knew we'd have trouble running the ball but coach wanted us in at the same time. We decided not to compete but cheer each other on. We had to both block and run for each other. That offense is kind of confusing but I really enjoy it. We had to pound for it.

"I think with both of our vision and ability we were able to turn four-yard plays into 10-yards plays. At the end of the season we both got to the point where we'd have a lot of yards per game. It helped us both."

Fobbs went straight from the field to the court after taking a year off from playing basketball his sophomore year. After improving on his lack of a left hand, Fobbs said he working on his game and liked the role he had carved out for himself as a sixth-man, do-all type.

"I didn't feel like I should have started but I felt like me coming off the bench gave the team a lot of energy," said Fobbs. "That helps if you're a run-and-gun type of team. I'm not one of them offensive players that likes to score. I like to get the assist, pass and things like that. We already had scorers so I shifted my game to defense and became aggressive and helped hold the other team's best player."

Fobbs played in 21 games for the varsity team eating up a lot of minutes for Sikeston, who finished its season 18-9 after losing to Notre Dame in the Class 4, District 1 championship. Fobbs attempted just 36 shots (making 22) while averaging just over two points a game. He wrapped up the season with averages of 2.6 rebounds, 1.3 assists and 1.5 steals.

"He had a great season for us last year," Holifield said. "He's a very hard worker and does a lot of the little things. He's hard-nosed, tough defender and good rebounder. He's the kind of player that will get on the floor after loose balls. He really brought a lot to our team."

After basketball ended, Fobbs was able to get back to the track team, a sport where his athleticism has shown the brightest with two trips to the state championship meet. He missed track season his sophomore year due to academic eligibility but has since raised his grades. 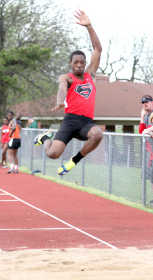 "Last year we didn't get to have him and this year he took care of his grades and got himself straightened out. He really did a good job," Flannigan said about Fobbs. "He learned how to work at what he was doing. A lot of times kids in track can't separate the work from the fun. But he real quickly got to work on his mechanics and coach Sarakas (Sikeston's jump coach) did a really good job with him. He just took off from there."

Fobbs, who qualified for state in the triple jump as a freshman and finished 10th, went on to win a district championship in the triple jump before turning a missed season of nothing but practice into a trip to the Class 4 state track meet in May.

"Last year I didn't do track because of my academics," Fobbs said. "I still practiced with them and tried to improve on what I could do. My freshman year when I went to state I really didn't do good. I didn't place or nothing. I was kind of scared being a freshman and stuff."

Fobbs finished all-state in the triple jump missing out an a state title by just over an inch. His second-place leap of 45-feet, 1 1/2-inches was narrowly beaten by Grandview's Cirr Davis with a jump of 45-2 3/4.

"That's a good lesson," Fobbs said about losing by less than an inch. "I knew what I needed to hit. I told coach that his first jump was going to be his best jump. I was sitting in third after two rounds. Once it stopped raining and the sun came out I knew I was going to jump far and just so happened to jump an inch behind."

"Our jumping has been down a little bit the past few years. All of a sudden we went through a little low spot and Earnest has kind of brought it back to that state-caliber form. We knew that he was going to be a good athlete and he was. He worked hard."

After a year's worth of setting his mark on three sports, Fobbs is ready for his next challenge.

"I'm going to try and set the standard in football," Fobbs said. "I've never really been on a team that's gotten far in the playoffs. We've lost to Cape the last three years and hopefully we can get past Cape and get on a run. We should be good this year. We have a chance to be good. And now that I know I have the potential to win state in track, I plan on getting out there and continue working. I'm ready."

His coaches are looking forward to it too.

"I think he's going to have a great senior year with football, basketball and track," Holifield said. "He's one of those guys that always works, always in a good mood and good things happen to players that have that attitude."