Squirrels rally in the seventh, walk-off winners over SEMO Pirates 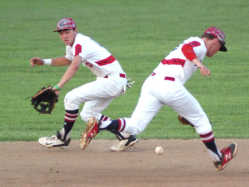 CHARLESTON -- You can never count out the Charleston Fighting Squirrels.

Trailing by two runs in the bottom of the seventh inning the Squirrels rallied for three runs, highlighted by a walk-off single from Hunter Cook that propelled Charleston to an improbable 4-3 win.

"What a win for our program," Charleston head coach Michael Minner said. "The magic continued to happen at Hillhouse. We believe in what we're doing. We're tough to beat here in the postseason. I believe that and our kids believe that. We never lost our composure. There were opportunities tonight where we could have laid down and just thrown in the towel, but we didn't."

Until their seventh inning heroics, a rough start to the game looked like it would send the Squirrels to the loser's bracket of the tournament.

Squirrels' starting pitcher Adam Pope surrendered three hits in the top of the first frame while making a costly error that allowed the Pirates to jump on top 3-0.

An RBI double by Charleston's Tim Fox in the second frame made it a two-run game, but Pirates hurler Hunter Eftink shut out the Squirrels the next four innings to take a 3-1 lead into the seventh.

A leadoff single from Fox was followed by a single from pinch hitter Cameron Clark, who had three hits in Wednesday's win over Mineral Area, to put the tying run on base.

Clark's hit forced the Pirates into a pitching change as Blake White took the hill only watch his first hitter, Kyle Moore, single to load the bases. A Chase Urhahn ground out to second base cut Charleston's deficit to 3-2 and left runners at the corners.

Another walk loaded the bases and the Pirates looked like they might escape the jam when a grounder back to the pitcher allowed a force play at home plate for a critical second out. Wyatt Pratt was next to the plate, however, and his patience paid off when he laid off a low, inside pitch on a 3-2 count to draw a walk that forced in the tying run.

Hitless in his first three at-bats, Cook capped the remarkable comeback when he went to the plate swung at the first pitch hitting a line drive to right field. Cook's shot easily brought in Blake Wolferding from third and sent the Squirrel bench pouring out of the dugout in celebration.

"I thought we were real patient, got the right pitches and did all the right things," Cook said of the seventh inning. "They threw me outside the whole game and I knew they were coming outside with that (last) one."

While many old school baseball fans might cringe at the sight of a player swinging at the first-pitch after a pitcher has walked two of the last three hitters, Minner saw things differently. 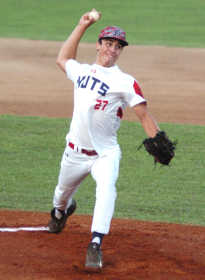 "My dad is probably sitting at work with his hair up now like 'are you kidding me?'," Minner said. "'You're swinging at the first pitch?' But this is 2015 and this is that new school. We want to be aggressive. If it gets us beat, it gets us beat."

The late rally allowed Pope to make good on the six dominant innings he put together after his shaky start. Following the three-run first, Pope allowed one hit and two base runners in the final six innings and retried nine-straight at one point.

Pope retired 19 of the final 21 hitters he faced giving up four hits and no walks on the contest while striking out two.

"Adam Pope was amazing," Minner said. "I told him he was bad in the first inning and he knew. He just wasn't sharp. He gave up an 0-2 (count) hit and made an error when he should have taken an out and he knew that. His job the rest of the game was to throw up zeroes and that's all he did. He made big pitch after big pitch."

For the Pirates (21-4), Brad Freed went 2 for 3 with two doubles, a run scored and an RBI. Freed's first inning double brought in the first run of the game and was followed by a Squirrel throwing error to make it 2-0.

Landon Johnson singled to become the fourth-straight Pirate to reach base and plate Christian Job, making it 3-0.

"We came out rolling then the hits stopped coming," SEMO head coach Neil Johnson said. "You have to hit all seven innings. We put up three then there's goose eggs for the next six. That's tough, but we have to learn from this."

With the win Charleston will face Wayne County this afternoon at 5 p.m. in the winner's bracket finals. The Pirates will play Potosi in the loser's bracket today at 11 a.m.