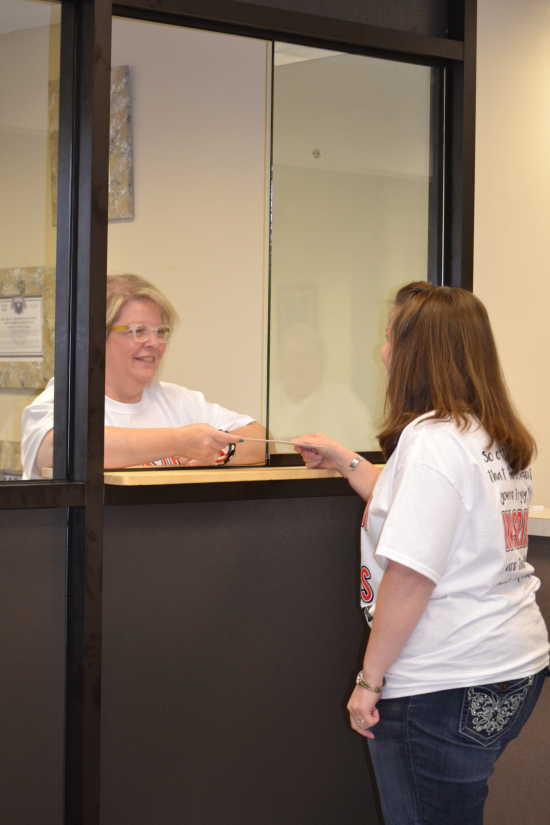 Sikeston R-6 Business Services Director Lori Boardman (left) and Human Resources Coordinator Yolonda Clark demonstrate how the recently added partition in the lower level of the board office will be used when visitors enter the building. A similar partition was constructed in the upper level of the building. Visitors will be required to "buzz" in once the installation is complete. Several other safety enhancements throughout the district were recently added, too, including buzz entry at the Junior High. (Leonna Heuring, Staff)

An on-the-go emergency notification system for administrators, partitions in the central office entry ways and electronic access control at the junior high building are among the latest efforts by the district to increase safety measures within the district this new school year, which begins Wednesday.

Over the summer Mike Brown, R-6 director of building and grounds, and his crew constructed a partition wall between the receptionist and general public on both levels of the board of education office. The partitions are enclosed by glass and aluminum, he said.

"They will also have have key guard access to open the doors," Brown said, adding work is close to completed on these projects. "It keeps people from having immediate access to the staff there. Plus, it gives limited access of who can go back into the building."

The secure entrance also creates increased confidentiality of those working in that area, he said.

"Visitors will have to 'buzz' in once school starts," Brown said. "You can't walk in the front doors without being let in, and there's a camera monitoring whoever comes and goes there. It's totally customizable."

"We're looking at putting in redundant and modification security access, such as double access doors and things like that," said Sikeston R-6 safety coordinator Scott Ezell.

Some of these changes may be annoying at times for parents, such as having to buzz in for entry at a school, but it's all for the safety of the children and staff, Ezell emphasized.

"We ask for a little patience in getting used to the new access control," Ezell said. "Hopefully, you will only have to wait a few seconds to get in."

Chain-link fencing was installed this summer on the top rails of the bleachers at the football stadium to prevent individuals from falling, Brown said.

Ezell said he's most excited about the district's new safety application, the "CrisisGo App," which gives pre-selected individuals, such as administrators, checklists with location-specific steps to take and provides maps showing evacuation routes in emergencies.

"This can dramatically improve the chance that teachers and staff will remain safe and guide students to safety," Ezell said.

CrisisGo's checklists and maps are stored on the phone so even if there is no connectivity, all users can still have access to such critical information, Ezell said.

"In today's world, things are so dynamic and happen so quickly and without any warning so having the crisis plan in the palm of our hands when something happens and not having to rely on downloading plans from the Internet is a big step for us," Ezell said.

Prior to the district's investing in the Crisis-Go app, its emergency plans were in a secure online database. However, they could only be accessed from a computer through the Internet, Ezell said.

"We looked at three different on-the-go emergency notification systems, and we went with the one that suited all our needs by putting our current disaster plans in our hands wherever we went," Ezell said.

Sikeston Department of Public Safety is also sharing the app with the district, Ezell said.

"We are sending out notification alerts on a wide variety of scenarios, and they can be sent by building principals or (superintendent) Tom Williams or DPS Chief Drew Juden," Ezell said. "It's another layer built into that kind of disaster communication. We could put out an email through a CrisisGo alert where everyone gets something at the same time."

There are multiple layers to district safety, and this app adds one more layer to that communication, Ezell said.

"The other good thing about CrisisGo is we were allowed to work with the company and put our current plans in place," Ezell said. "With a lot of the other companies, you had to use their plan, and they didn't suit our needs as well as CrisisGo did."

Ezell was able to talk to officials at a St. Louis-area school district that uses CrisisGo, and they said they've been very pleased with the app, he said.

Sikeston principals will be trained on the app this week, Ezell said.

The district will also set up several committees throughout the school year to revise its emergency operations plan, which is on a three-year cycle review, Ezell said.

"We'll be doing active-shooter drills with DPS, which is required by the state," Ezell said.

The staff must be trained on the district's discipline code and seclusion restraint training, which is another requirement by the state, he said.

District personnel will also participate in safety trainings on violence prevention and how to report child abuse and neglect as well as dealing with student's allergic reactions.

"We're looking at expanding our communications in a crisis," Ezell said. "We hope to have cameras, and hopefully ways to expand communication coverage with the PA system."

In the meantime, Ezell said parents can also do things to improve their communication with the district. He encouraged them to sign up for Twitter alerts from the district.

"A lot of school districts and businesses are utilizing that as way to disseminate information in crisis," Ezell said. "Make sure the district has correct contact information on file and a proper phone number to the building secretary."