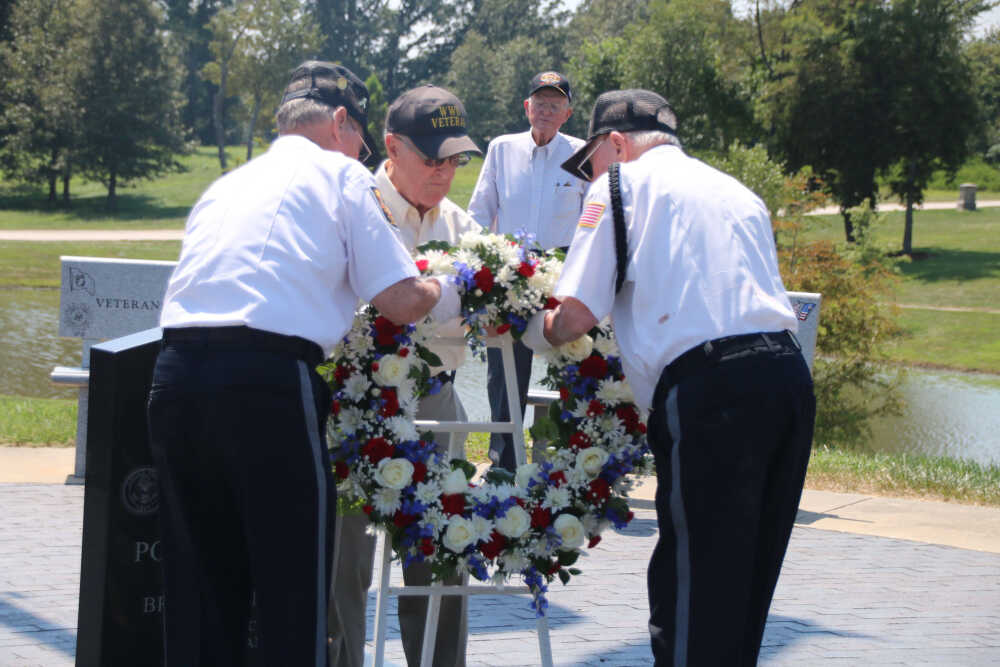 Laying the wreath during Sunday afternoon's Spirit of '45 ceremony at the Missouri State Veterans Cemetery are R.W. Richmond (behind the wreath), assisted by Jesse Deardorff and Elmer Wilson. Looking on is World War II veteran Bonnie Gillespie. The ceremony commemorated the 70th anniversary of the war's end.

BROOMFIELD - It is often referred to as, "The Greatest Generation's Greatest Day" -- August 14, 1945 -- the day that marked the end of World War II.

Seventy years later, that day was commemorated around the globe over the recent weekend as a means to recall the achievements of those who served in World War II and for a nation to rededicate themselves to carry on the legacy of "The Greatest Generation."

The Spirit of '45 movement challenged Americans to "remember and be inspired," and that was the theme as Ken Swearengen, director of the Missouri Veterans Cemetery in Bloomfield, addressed a crowd gathered Sunday afternoon on the cemetery grounds.

Swearengen joined with hundreds of communities across the country on Sunday as wreaths were put in place by veterans to recognize the 70th anniversary of the war's end.

Globally, the 70th Anniversary Commemorative Tribute began in the Western Pacific with a ceremony organized by the Phillippine Scouts at the Manila American Cemetery in the Philippines. The tribute continued westward through Europe with individual ceremonies in countries where Americans sacrificed their lives in the cause of freedom.

Ceremonies took place at all national and state Veterans Administration cemeteries throughout the U.S., before concluding at the National Memorial of the Pacific Cemetery in Hawaii.

Eight local World War II veterans were seated to be honored at Sunday's event, and following the brief laying of the wreath ceremony, guests had an opportunity to personally thank each of the veterans for their service.

The Stoddard County Honor Guard, two members of which are WWII veterans themselves, presided at the event, performing the ceremonial three-volley salute.