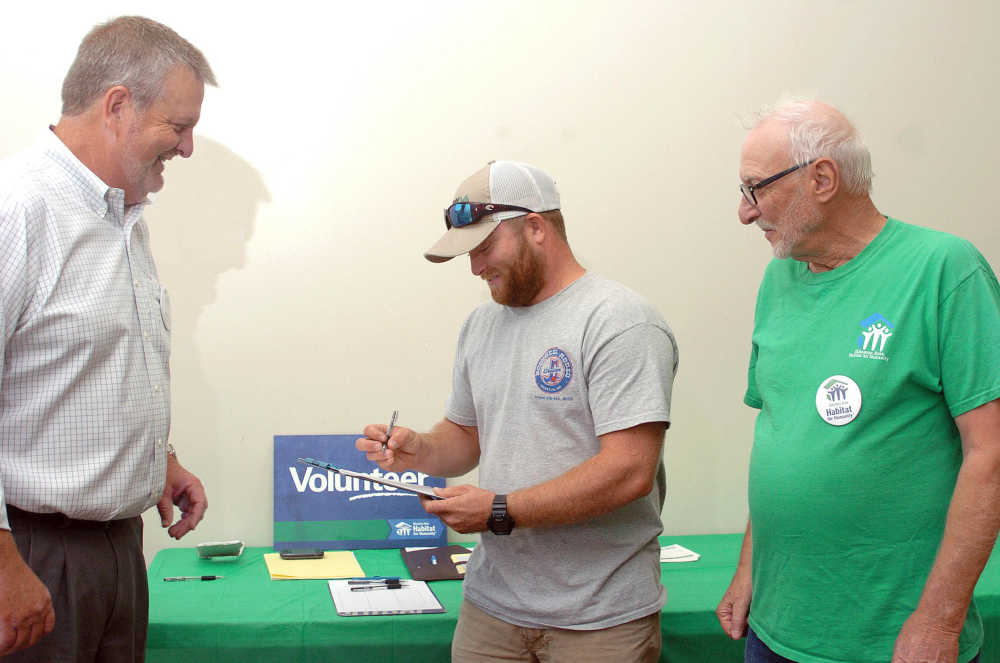 The Sikeston Area Habitat for Humanity supporters were working to get the word out about their housing program and a new effort, Brush With Kindness, which assists homeowners struggling to maintain their homes. David Strom, left, president of the Sikeston Area Habitat of Humanity, and Dan Jones, right, vice president and volunteer co-ordinator, watch as De Bizzell signs on to volunteer. Jill Bock, Staff

SIKESTON -- The Sikeston Area Habitat for Humanity has helped five families achieve the American dream of home ownership. Now, they are expanding their community involvement with a new program.

Wednesday, David Strom, president of the Sikeston Area Habitat for Humanity, and other Habitat volunteers were at the YMCA of Southeast Missouri working to get the word out about Brush With Kindness. A home repair program, Brush With Kindness seeks to preserve homeownership by partnering with homeowners struggling to maintain their home.

Strom explained the repair program follows much the same model as Habitat for Humanity's home building program, but on a smaller scale. Rather than constructing a house, he said, Brush With Kindness concentrates on projects, such as painting, building a wheelchair ramp or repairing a porch.

"It is designed for people who own a home but can't afford or are unable to maintain it," he said. "We are just now getting the word out and we have already had some interest."

For more on the story, see Thursday's Standard Democrat.