NMCC falls in straight sets to Bloomfield in Class 2 sectionals 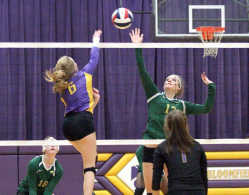 BLOOMFIELD -- Despite a strong start and key rallies to stay in both sets, New Madrid County Central couldn't hold down host Bloomfield Saturday in the Class 2 sectionals.

Combining for 21 total kills, the Lady Wildcats finished both sets strong to sweep the Lady Eagles 25-14, 25-16 and advance to the quarterfinals later that day.

"They've never played in this type of atmosphere before," NMCC head coach Whitney Gorton said of her team. "This is a Stoddard County school and volleyball is top-notch in Stoddard County. They couldn't hear each other and it was just the atmosphere I think. This is our first time here in 25 years and I think it may have gotten to them a little bit."

At the onset Bloomfield appeared to be the team fighting nerves dropping the first points to give the Lady Eagles a 4-0 lead.

Awaking soon after, however, the Lady Wildcats went from trailing 7-6 to taking seven straight points and never looked back. A small Lady Eagle rally had them within four points at 14-10, but Bloomfield closed out the set soon after on a 7-1 run to set up a potential sweep.

The second set had a similar feel with NMCC hanging in the game at 14-10 once again, but like the first set the Lady Wildcats closed out in dominant style.

Leading 18-13, Bloomfield won seven of the final 10 points thanks to three kills and a pair of aces to end the Lady Eagles' season, 25-16, and set up a meeting with Arcadia Valley in the quarterfinals. 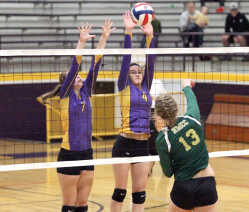 "On the way up here everybody was ready to go," Gorton said. "We hit a few balls in the gym. I think our biggest thing that killed us was that we set (senior) Gabby Gilmore four times. We got our biggest hitter the ball four times. That just absolutely killed us."

On the other side, the Lady Wildcats' attack was sharp all match as they finished with 21 kills. Bailey Below easily led the team with 11 kills and Ashley Angel was second with five.

Nicole Roper led the team with 18 assists, Jewell Chism had three aces with Roper and Lilly Warrick contributing two each. Chism and Roper collected nine digs each with Below contributing six.

"The last three days in practice we changed our defense for Bloomfield," Gorton said. "I talked to other coaches and I read every article about them. I knew where they were going to hit the ball and where they would tip the ball.

"For three days we worked on what we were going to do to get ready for Bloomfield and I thought we were ready. But tonight they didn't get into position like we'd done the last three days they didn't do what we needed to do and it showed."

Though NMCC's season comes to a close short of the quarterfinals and with a 21-13-3 record, the Lady Eagles secured the school's first district title in the sport since 1990. 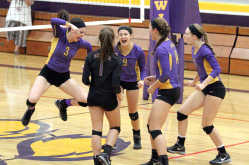 "I'm still excited," Gorton said. "We're in a spot we haven't been in 25 years. It's fun and the girls were excited. I think getting here and seeing all the people may have been an overwhelming type of atmosphere for them because they're not used to that. Even at districts we have about 15 fans there for our side and packed with Malden people. But we're going to get volleyball where it needs to be."

Bloomfield trailed 20-11 in the first set before battling back to make it a three-point game at 22-19. An Arcadia Valley timeout calmed the team down and took three of the next four points to win the set.

Down to their final points in the second set, trailing 24-16, the Lady Wildcats forced Arcadia Valley to burn both their timeouts as they took the next seven points to close within a point, 24-23.

With no room for error, Bloomfield saw a kill attempt blocked at the net on the next point to allow Arcadia Valley to narrowly save the set and advance to the final four with a 25-23 win.