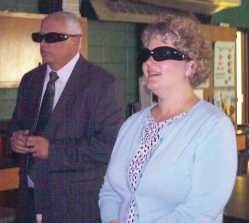 "We're pretty excited about what we are doing," stated Malden School Superintendent Ken Cook referencing the recent advancements the District has made in technology.

The Science and Technology Engineering Arts and Mathematics Lab (STEAM) was officially opened Monday, October 5 at a reception and open house.

"That 3D image has value," said Cook continuing to explain that the hands on experience the students will gain will allow for greater comprehension of subject matter.

"Our students are going to understand that," he said of the concepts introduced with the Rover and design computers.

Those in attendance Monday night, which included State Senator Doug Libla, State Representative Tila Hubrecht, city officials, school administration, members of the Malden Board of Education, members of the Board of Directors of the Malden Chamber of Commerce, and local business people, partook of a video overview of the lab and its capabilities and were given the opportunity to view and experience the new lab and 3D AVRover.

The 3D AVRover is an educational projector that, used with special eye glasses, brings educational concepts into three dimensions with the capability of focusing and labeling particular components. Easily the heart or solar system can be viewed as if the students were actually seeing it in real life.

The mobility of the Rover, as well as its easy to use function, allows it to be moved to various locations, including sixth grade classrooms.

Candi Simpson, the sixth grade science teacher, has already used it as part of her instruction. Though the students were awed by the dimensions, they were able to more easily grasp concepts and retain focus.

"This video is a great way for them [students] to see the change as the blood becomes oxiginated," explained Simpson. With the Rover, the step by step process of oxygenating the blood can be viewed with far more detail than even traditional video allows.

In what is called the Z Space, virtual reality computers allow for virtual disection, the construction of engines, experimentation, viewing the intricacies of a volcano, and other far-reaching functions in microbiology, earth science, botany, astronomy, chemistry, mechanics, paleontology, zoology, and the human anatomy.

With special glasses and a stylus pen, students can point and move planets, flowers, and animals in any direction they wish. The capability of exploding, imploding, removing parts, or making translucent subject matter is available- interacting as if the subjects were real.

Students of physics can design and test how things move or even fly with special design computers and 3D printers. A catupult project is currently in the design phase and will soon be printed.

The human heart, a vase, a moveable toy elephant, and cups are just a few of the items students have already created.

Art students will also be able to print in 3D perspective drawings they have made.

Cook explained there are also occupational benefits to this new technology as jobs in science, technology, engineering, and math are growing and are more likely to be higher paying.

He also shared that studies have indicated these technologies provide for a richer learning experience engaging more senses in the learning process resulting in a higher level of retention.

"It's amazing how many things we are finding out we can do," summarized Cook of the new technology.