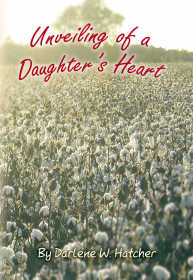 "Unveiling of a Daughter's Heart" is the nonfiction book written by Sikeston native Darlene Hatcher. The book is available as an e-book on Amazon.com.

SIKESTON -- Sikeston native Darlene Hatcher is always driven to find a way to honor her late father who died of a heart attack when she was just 7 years old.

Hatcher is the daughter of former Sikeston couple, Elva Hatcher of Colorado Springs, Colo., and the late Wade Hatcher.

Hatcher described her father as the "most gentle-natured, loving man."

"From what my mom says, I had him wrapped around my finger. I was his world. He was my world," she said.

Hatcher's parents owned Wade's Food Mart, located on the corner of Helen and Warner streets in Sikeston. Hatcher's father cut meat for many of the restaurants in town. He often gave Hatcher a job of putting toothpicks in the filet mignon when they wrapped the bacon around them.

"I loved working at the store. I always wanted to be by his side," Hatcher said of her father.

Then, in July 1971, Wade Hatcher Hatcher died at their home at the age of 48. Hatcher said she was playing in a cotton field in Sikeston at the time.

"To have such a loving dad who was so involved with the family and so there, and to be taken so fast, it leaves you with a big loss," Hatcher said.

In 1981 when Hatcher was 14, she, her older brother and their mother moved from Sikeston to their mother's hometown of Colorado Springs, where they live today.

But Sikeston has always remained in Hatcher's heart and wanting to make her father proud while honoring him in the process has always been Hatcher's goal.

She's incorporated both in her new book, "Unveiling of a Daughter's Heart." Hatcher addresses her relationship with her father as well as the relationship between fathers and daughters in general.

"It's about having to learn forgiveness, understanding and things with God," said Hatcher, now 48. "It's been an amazing journey, but yet I'm still driven and doing things to make him proud."

The book cover even depicts a cotton field similar to the one Hatcher remembers that grew in the field across from her family's grocery store.

For the complete story, see the weekend edition of the Standard Democrat.