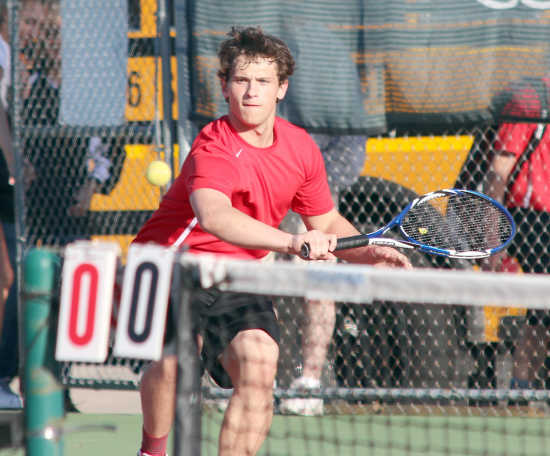 SIKESTON -- The Sikeston boys tennis team isn't immune to the wet start that spring sports has suffered through so far, but courts draped with water puddles aren't the only reason for its average start.

The Bulldogs dropped to .500 Tuesday when Festus snuck out a 5-4 win at Sikeston High School during the last two matches of the day. They led by two matches after doubles play, but dropped four of the six singles matches that followed.

"I saw what I expected to see," Sikeston coach Russ Dial said. "We haven't played a lot of matches this year. We're a little bit behind on our number of dual matches and that puts us a little bit behind other schools. Our technical skills are not where they need to be."

Getting into a groove has been a struggle for Sikeston with rainouts, postponements and reschedules littering their schedule. Adding to the weather's noncooperation is a hinderance Dial has come accustomed to over the past few years.

"We have so many new players that I had to play up on varsity," he said. "We have 11 on the team and four of those guys are returners. The rest of the guys are completely inexperienced."

That's a trend Sikeston's tennis team has witnessed for a while now.

The Bulldogs finished last season at 5-7 after starting the year 2-3. As a matter of fact, Sikeston has started the last two seasons with a 2-3 record after their first five matches. That could be seen as a positive considering that going into each season new players have a short time to learn a new sport. 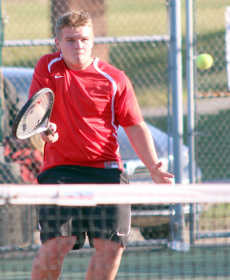 "We had to really coach them up and just get them to where they could hit the ball and rally the ball over the net," Dial said. "I'm really proud of them because they're coming along really good."

Sikeston began the year with a 2-0 record, but one of those was a forfeit by Marion, Ill. Their first true match of the year was a decisive 7-2 win over rival Cape Central on the road. Getting a win over a fellow Class 2, District 1 foe boosted morale for Sikeston's young squad.

"It felt great to get that win," Dial said. "Cape is a little bit down this year but you have to take advantage of those situations. It was big for us to go in with the inexperience that we have and beat a rival like that."

Since then the Bulldogs have dropped its last two matches which included a rain-shortened 6-0 win by Farmington on the road.

"We had a pretty good start, but we were still behind because of the weather," Dial said. "We need to get in that match-play mode...The biggest thing is the inexperience. When you have guys that have never even played a game before and you've got two week to get ready and be competitive, it's tough. But they're athletic enough to where they can catch on to the basics rather quickly."

Brett Johnson, Coby McMikle and Jordan Wheatley are three players who boast varsity experience. Both Johnson and Wheatley won their singles matches as well as helping their doubles tandem to wins on Tuesday too.

Down 4-3 with two singles matches to go, Wheatley and Will Leonard were left alone on the court to finish out the day. The first to finish was Leonard, who dropped an 8-6 decision to Kerra Gray which pocketed a victory for Festus. Wheatley squeaked out a 9-8 tie-break over Ethan Koch shortly after.

"We were looking good coming out of the doubles so I felt really good about that," Dial said. "But then the inexperience got us in the singles."

Johnson and Beau Bryant defeated Christina Carrig and Alex Tinnin 8-3 in doubles while Wheatley and Michael Porter won 8-6 over Kerra Gray and Danielle Mann to give the bulldogs its 2-1 edge to start the day. Michael Hawkins and Koch took down McMikle and Leonard 8-3 in the other doubles match.

McMikle, Bryant, Leonard and Porter all lost singles matches to bring Sikeston's record to 2-2 on the year.

Sikeston will host Dexter today at 4 p.m., and then host Notre Dame on Thursday in a match that's been scheduled three separate times due to inclement weather. They'll cap this week with the Cape Central doubles tournament on Saturday morning against Dexter and Cape Central.

"As soon as we get some more repetition we'll be better," Dial said.