That's the eticket: Traffic tickets move into the 21st century 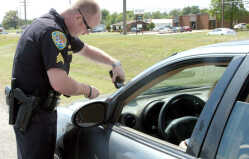 Sikeston Department of Public Safety Sgt. Ryan Smith uses his eticket device during a traffic stop on Malone Avenue to scan in the barcode on the vehicle's VIN tag, automatically uploading the information. The new devices being used by officers while on patrol are designed to reduce the time of a traffic stop getting the officer and the driver of the stopped vehicle back on the road more quickly. Jill Bock, staff

Officers with the Sikeston Department of Public Safety now carry a small hand-held computer when they go on patrol that is designed to make traffic stops quicker and safer.

A $25,138 grant from the Missouri Department of Transportation funded the purchase of seven hand-held devices along with seven bluetooth printers. The grant also pays the service fees for the next three years on the devices.

An eticket prints out in the patrol car of Sikeston Department of Public Safety Sgt. Ryan Smith. The new etickets are easier to read and faster to issue according to Sikeston DPS enabling drivers to get back on the road and to their destination more quickly and making the roadways safer.

Using the devices, officers can write citations, warnings and trespass notices. Also they are used for accident reports.

"What is really nice about these is they offer a scanning ability," explained Sgt. Ryan Smith.

During a vehicle stop, officers scan the vehicle's VIN tag's barcode which automatically puts information about the vehicle into the device. Driver's licenses have barcodes as well, and with a quick scan that information uploads, too.

According to Smith, once that information is uploaded, there are only a few remaining tabs to be filled by the officer.

The officer's copy of the citation stays stored on the device while the driver's copy is printed out, looking much like a receipt.

A study found that a typical traffic stop where an officer issues a paper citation takes an average of 15 minutes, Smith said.

For the complete article and more stories from the Standard Democrat, log on to the electronic edition.