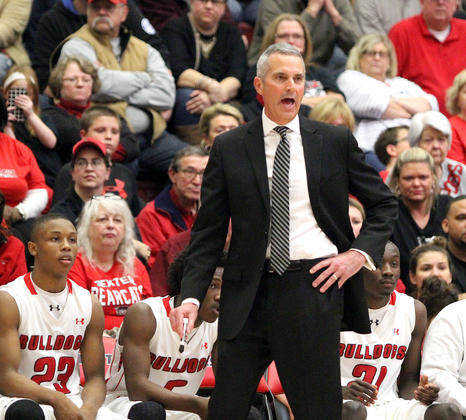 In this March 4, file photo, Sikeston coach Gregg Holifield calls out a play to his team during the third quarter of the Class 4, District 1 championship game at the Sikeston Field House. (David Jenkins/Standard Democrat)

SIKESTON -- While Gregg Holifield's 25-year coaching career is mainly highlighted by unparalleled success on the basketball court at Sikeston, that's only the half of it.

He's won a state championship and had stints in the collegiate and professional levels in baseball and he's ready to bring that side of him to Sikeston.

"I've coached baseball for years before I came here and I've always admired our baseball program," Holifield said. "When it came open I thought it'd be a good fit at this particular time. I love basketball and I love baseball. That's my two passions. I'm very excited about it."

Holifield, who turned 54 in April, will continue to lead the basketball program while adding the baseball team to his duties.

"When he heard coach Scheeter resigned he showed some interest," Sikeston athletic director Andy McGill said. "He applied, we talked and it worked out. We're excited to have him. He's got a lot of experience coaching baseball."

It's no doubt that Holifield's biggest contribution to Sikeston sports has been the success of the basketball team. Never before have the Bulldogs achieved the likes of what he's given to the school with 10 district championships, five SEMO Conference tournament titles and four state tournament appearances which includes the unforgettable, perfect championship season in 2011.

Holifield, who was inducted into the Missouri Basketball Coaches Hall of Fame in 2014, has compiled a basketball record of 444-217. He's 337-150 at Sikeston, which makes him the all-time leader in wins at the school.

The concern of possibly stretching himself thin between the two sports, which follow each other from the winter into the spring, was addressed. Last season the basketball team ended with a fourth-place finish in the Class 4 state tournament on March 19. The baseball team played its first game of the season March 22.

Holifield quickly squashed any notion that his newfound baseball venture will take anything away from his revered basketball program or vice versa.

"I'll give everything I can to both sports," he said. "Nothing will change in any way with basketball. Hopefully we can lift the baseball program to the level of the basketball program. I don't feel like that's a concern at all.

"One thing that will help is that I have great assistant coaches...I think it will blend right in together."

Holifield's baseball experience began at his high school alma mater in Senath-Hornersville, where he graduated in 1980. He took over the basketball and baseball teams in 1991 and after three seasons, Holifield led the Lions baseball team to a state championship and the basketball team to a district title both in 1994. He went on to help the Kennett baseball program between 1995-97, then spent a year at Greene County Tech in Paragould, Ark., before arriving at Sikeston in 1998.

He was also an assistant baseball coach for Arkansas State University and Three Rivers College and was the strength and conditioning coach for the Kansas City Royals and Texas Rangers minor league organizations in 2002 and 2004.

"He can coach. With his experience that he's had with baseball and the experience he's had at Sikeston, it's going to definitely carry over," McGill said.

Including Holifield, McGill said that five different interviews were conducted for the baseball position. Current assistants Steve Drake, Josh Hopkins, Brett Kolons and Jacob May all applied for the head coaching position and will remain as assistants to Holifield.

With Scheeter's resignation announced in June, McGill's search for a new baseball coach began and ended in-house due to unavailable teaching positions.

"Ideally, you want to open up your search for anybody that may be interested to coming to Sikeston baseball and working with that tradition," McGill said. "However, with the situation we were in I felt confident in the applicants that applied."

Although the search was limited, Holifield's appointment isn't planned to be short-termed.

"We're going to see how long he can do it," McGill said. "It's going to be difficult for him and I don't think anybody will deny that as far as carrying on a championship basketball program and then moving right in to trying to establish a state championship baseball program. There's no doubt it will take a lot of time, a lot of hours and a lot of sweat. I think he wants to do it as long as he can...At the same time, he has great assistant coaches in both sports and we'll have to rely them. He has a plan for what he can do in the offseason to make us better in both basketball and baseball and to be able to establish both.

"He's done it before at different schools and with less assistant coaches at the time," McGill added. "He knows how to do that."

Holifield inherits a baseball team that, by comparison to basketball, has struggled to find postseason success of late.

Baseball's district title drought ran up to nine seasons last year after a 15-9 record and a Class 5 district semifinal appearance that ended at the hands of Jackson in nine innings. Sikeston, who own 27 district titles and a slew of state tournament appearances, hasn't won a district title since 2007 and have appeared in two district championship games since.

"They've always had great coaches here and a program that's very well respected," Holifield said. "I just want to continue that. Get our kids to work and try to get them better. We've got a lot of young guys that want a good program. We just have to get in there and work as hard as we can and let it things fall where they may...I know we have great kids that will work hard and do everything we can."