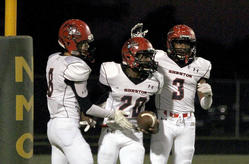 NEW MADRID -- On the team's first play from scrimmage, Justus Faulkner showed what the Sikeston football team had been missing for the past three games.

The 5-foot-7 senior scored on his first carry of the game and continued to run wild throughout the entire game as Sikeston rolled past New Madrid County Central 54-6 on a blustery Friday night at NMCC High School.

Faulkner, who was out of action for three games with complications from mononucleosis, returned to action in a big way on Friday by rushing for a career-high 225 yards on 22 carries with three touchdowns. The game topped his previous career-high of 205 yards in the last game that he played 28 days ago against Cape Central.

It is also the most rushing yards by a Sikeston player since Kyland Gross ran for 236 against Jennings in 2012.

"It gave everybody a boost," Sikeston coach Kent Gibbs said of Faulkner's return. "We just wanted to see where he was. We went into the game not really knowing how much he would play on either side of the ball but he kind of got on a roll a little bit and he was hitting the holes hard. It took him probably three or four plays, there were a couple of reads that he missed -- he was a little anxious, but once he got in the groove and started getting his pads hit a little bit he did a nice job for us."

The win by Sikeston snapped a two-game skid to improve to 5-3 on the season, but the game had its share of sloppy moments for the Bulldogs.

A lost fumble and numerous costly penalties in the first half kept things interesting for a half against an NMCC team that has struggled on the defensive side of the ball. 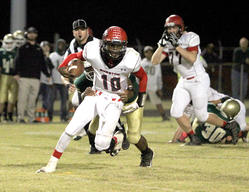 "Take your hat off to New Madrid, they were ready to go from the get-go," Gibbs said. "They played well. They moved the ball on us. We were just sloppy mentally and it was kind of that way in practice this week. We've got to do a better job of getting them focused and ready to go. Coming off the two losses like we did, we just weren't quite as sharp as we needed to be."

The Bulldogs broke the string after NMCC fumbled the ball back to Sikeston on a botched punt attempt, setting up the Bulldogs at the Eagle 38.

Three plays later, Faulkner scored from the 9 to increase the Sikeston lead to 14-0 with 6:28 left in the second quarter.

On the ensuing possession, NMCC (1-6), which found success through the air, got on the board when quarterback Brock Blakey hit receiver Tra Ranson in stride for a 55-yard touchdown to trim the lead to 14-6 with 5:33 left in the quarter.

Two possessions later, Faulkner added his third touchdown on a run from 18 yards out to increase the lead to 21-6 heading into halftime.

"We just went in at halftime and told them, 'we've just got to play and if we do that we'll be okay.' The kids came out in the third quarter and played well," Gibbs said.

Matthew Perry added a 12-yard touchdown run with 58 seconds left in the game to reach the final margin. 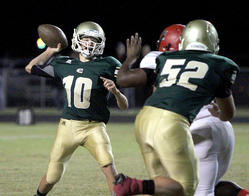 "The kids came out ready to play. I mean this is a fun rivalry between us and Sikeston. The kids really get geared up for it. It was fun. The first half was fun," NMCC coach Tyler Fullhart said. "The second half I think it was a lack of focus by us. We fixed some things at halftime and they fixed some things at halftime. Their adjustments were good, so hats off to coach Gibbs."

Sikeston finished with a season-high 475 yards rushing in the game. Gibbs pointed out the downfield blocking by his receivers and offensive linemen as helping break loose some of the big runs.

"We blocked really well on the outside," Gibbs said. "We had a couple holding calls, but I don't mind those so much on the edge, everybody's got a different idea of what that is. But our kids were aggressive and we told them to stay that way. I also noticed when Elijah was downfield on his fly-sweep to the boundary, David Rowland was way downfield trying to make a block and that's big when you see a big 260-pound kid running downfield with him trying to make another block for him."

Conversely, NMCC could not find any room to run on the ground, finishing with minus-17 yards rushing, a number skewed by numerous quarterback sacks by the Bulldog defense. Not counting quarterback losses, NMCC still only managed 23 yards rushing.

However, the NMCC passing attack was effective with Blakey throwing for 216 yards, completing 20 of 38 passes in difficult windy conditions.

"Our pass protection wasn't very good," Fullhart said. "We had some things that were there but we didn't have time to throw the ball. I'm an old offensive lineman and I like to run the ball, but we take what the defense gives us. Right now we've got guys that can matchup pretty well on the outside so that's what we try to do."

Sikeston's defense dominated the second half as they limited the Eagles to just 43 yards of offense.

Sikeston forced three turnovers in the game and also blocked a punt and an extra point on special teams. 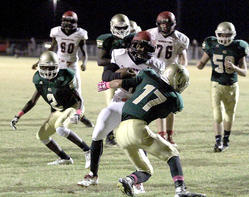 "Our defense was aggressive all night," Gibbs said. "We were a little bit slow early, but we kind of got the cobwebs out and did much better in the second half."

Ranson finished with 10 receptions for 122 yards to lead the Eagles.

Fullhart, who picked up his first win as NMCC's head coach last week against Kelly, was upbeat after Friday's game despite the lopsided final score.

As for Gibbs, he was just happy to get past the back-to-back losses to Farmington and Poplar Bluff with a victory against the Eagles.

"We talked all week about losing two in-a-row and we just got to get up and play," Gibbs said. "We had a couple games there we had an opportunity to win and we didn't do what we needed to do, so this is a big win for us. It gives us a little bit of momentum going in against Park Hills."