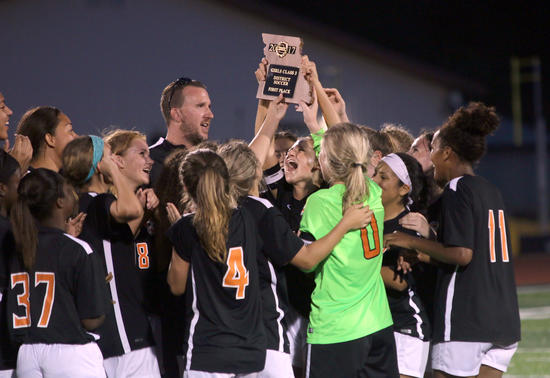 FARMINGTON, Mo. -- It was all a blur to Calli House. With time running out on her season and career, the senior quickly gathered herself for a free kick with just 14 seconds left. Seven seconds ticked off the clock before House was able to fire off a shot, hoping to tie the game against top-seeded Sikeston.

House powered a kick over a wall of Sikeston defenders from 30 yards out and it kept that same line over the head of Bulldog keeper Madeline Witt to tie the game at 1-1. With seven seconds left in regulation, House's clutch goal kept Cape Central's season alive.

"I was honestly in shock," she said. "I just knew in that moment that this was it. It was the last chance we had and I just tried my best to put it in." 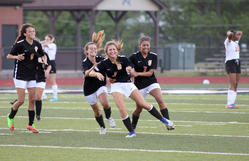 Members of the Cape Central girls soccer team rush Calli House (2) after she tied the game at 1-1 with seven seconds remaining against Sikeston during the Class 3, Districti 1 championship game Thursday, May 18, 2017 in Farmington, Mo. (Chris Pobst/Standard Democrat)

Then, after two overtimes, sophomore Mattie Huff poked in the deciding goal during penalty kicks to cap an improbable comeback and magical run through the Class 3, District 1 tournament to give the third-seeded Tigers their first district championship in over a decade with a 2-1 win.

"It's everything a district championship should be," Cape Central coach Jared Dobbs said. "It was two solid teams going after it and I think both teams played until the end. We got [House's] goal with under 10 seconds left and I think that really propelled us, momentum-wise, going into the overtimes."

For 79 minutes in regulation, the Tigers couldn't generate much offense against a Sikeston team that set a shutout record this season.

Cape Central's defense was stout, for the most part, but the Bulldogs scored in the 69th minute when Mackenzie Yant broke from her defender and put a stellar shot into the right pocket of the net for a 1-0 Sikeston advantage. 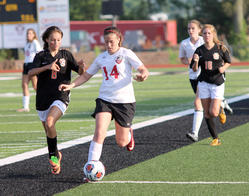 Cape Central (10-11-1) was all of a sudden on the attack after Yant's goal, quickly scrambling to keep the game going.

The Tigers slithered through Sikeston's defense, which seemed much harder for them to do beforehand, and won most 50/50 balls to push their attack.

Looking for a breakthrough in the final minute, a shot was quickly whistled dead after a handball call on Sikeston stopped play with 14 seconds left. House was the closest Tiger to pick up the ball and quickly place it on the turf.

She picked her spot, settled and put her shot on goal just hoping for the best.

"I was definitely looking for a goal there, nothing else," House said. "It's all kind of a blur now."

That led to two scoreless overtimes where Sikeston went back on the attack, but couldn't find the net.

"We had them on their heels in the two overtimes and our girls were playing more aggressive and creating chances," Sikeston coach Gabe Dement said. "You could tell we wanted to end the game in overtime and just get it over with. It just didn't work out." 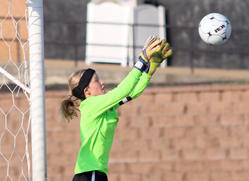 After 30 extra minutes, House scored the first penalty kick for the Tigers, then Madilyn Dunn added another for a 2-0 lead. After a miss by Natalie Grimm, Huff sparked the Cape Central celebration at mid-field.

"We had training yesterday and Saturday on PKs," Dobbs said. "I've been in way too many postseason games to not work on PKs. I've been a part of some great games over the years, but this one might take the cake."

"Practicing those PKs before it just gave us the confidence that when we walk up to the line we can put them in," House said. "When it came to that, we knew we had it."

It was a bad case of deja vu for Sikeston.

The boys season ended after nine rounds of penalty kicks in October during the Class 3, District 1 tournament in Bonne Terre, Mo. Dement, who coaches both the boys and girls teams, witnessed both crushing losses. 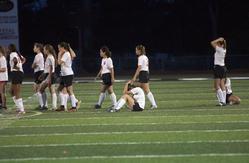 "I'm not a big fan of [penalty kicks]," Dement said. "Obviously it's different if you win it. I just would prefer to keep playing overtimes."

Had they held on for nearly 11 more minutes in regulation, penalty kicks wouldn't have been Sikeston's demise.

Just 10:53 was all that separated the Sikeston girls soccer team and their second district championship in three years when Yant scored the game's first goal.

After prodding the Cape Central defense for most of the game, the Bulldogs finally broke through and sent a shot past Kinder for their 1-0 lead. Yant's goal was placed perfectly above and beyond the reach of Kinder.

"That shot was great," Dobbs said. "There's absolutely nothing our goal keeper could have done."

With a newfound lead in hand, Sikeston needed to hold on for 10:43 to secure the win. To do that, they elected to shade more towards defense than to keep its same formation and push for another goal.

Unfortunately for them, it didn't work.

"There's two trains of thought there: keep attacking to try and go up two goals to put the game away or try to hold on for 10 minutes and trust your defense," Dement said. "All year long we did that and, honestly, it wasn't a defensive error that caused the free kick and so we dropped back and played a 4-5-1 hoping to slow them down. But, Calli House, she's a stud. I voted her the best player in our district. She put that one on frame and it was a great shot.

"We played 110 minutes as hard as we could, as well as we could and just couldn't find a second goal." 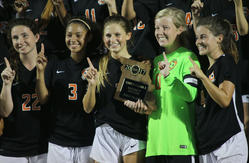 It's been quite a ride for the Tigers so far this postseason.

After winning just three games last season, they defeated No. 2 Farmington 3-2 in two overtimes during the district semifinals on Tuesday. Then, 48 hours later, they hoisted a district championship plaque after taking down the top-seed in penalty kicks.

"It's just special for the girls, especially with some of their past history," Dobbs said. "To come out and win it this year is amazing."

Cape Central will host Hillsboro, who defeated Festus 3-1 in District 2, on Tuesday in the sectional round.

Sikeston ends the year with a 15-6 record after setting a new goals record and shutout record for the season. They will lose four seniors -- Witt, Curry, Larysa McClellon and Kayla Graham. Curry, McClellon and Graham have all committed to playing college soccer for Missouri Baptist university.

"We have some studs that we're going to miss," Dement said. "Witt is probably one of the best, if not the best, goalie in girls soccer we've had. Kayla Curry could play any position for me but turned into a starter center-mid this year that I never wanted to take out. Kayla Graham played more left-back minutes than any girl that we've ever had and one of the smartest players I've ever coached. Larysa, just a stud goal-scorer who's so positive and gets on to her teammates for being negative. Those three are going to go on and do some big things [at Missouri Baptist]."