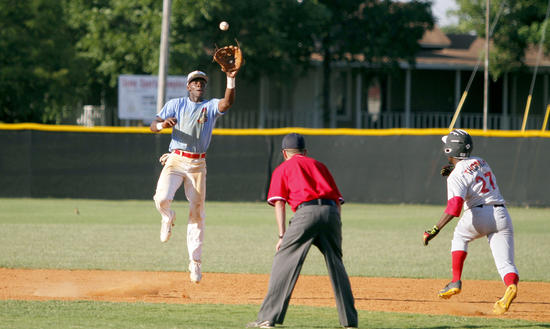 SIKESTON -- The Sikeston Silver Sox were in a tough spot even before their final Fighting Squirrel Classic pool play game got underway Friday at VFW Memorial Stadium.

The Sox suffered a crushing loss to the Columbia 17's in their first game of the day, giving up the winning-run in the last inning. With that loss festering for the next three hours, Sikeston's senior legion team simply wasn't ready for their next battle against a powerful Ultimate Baseball squad, who sprayed 12 hits.

The Silver Sox fell to 1-2 in Pool B after a 10-2 loss to Ultimate Baseball in six innings due to the tournament's eight-run, run rule after five innings. 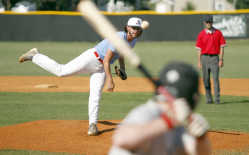 Sikeston fell to the Columbia 17's 9-8, which set a bad tone the rest of the day, according to Silver Sox coach Ryan Moses.

"I think it definitely had an effect because that game, the bats came out and was hot and then defensively we just gave up way too many runs," Moses said about their first game of the day. "From a baseball intelligence standpoint, it wasn't a very well-played game and I think that ruined some of the morale. There wasn't a very good mood set for Game 2. Overall, just a bad day of baseball."

Ultimate Baseball, who are based out of Kennett, Mo., took a 2-0 lead after the first inning then exploded for five runs in the third to take a clear handle on the game.

Ultimate Baseball had five hits in the third, including a two-run triple by Ty'Reik Thomas and an RBI single by McKenzie Worth.

"We hit the ball a lot better today, barreled some balls and had some timely hits," Ultimate Baseball coach Jon David French said. "That was a good team win. I think if we can hit the ball like we did today we can go far in this tournament."

The Silver Sox committed two errors during Ultimate Baseball's five-run third and helped their counterpart get on the board in the first inning.

A single by Lathan Brooks led to Brooks getting caught in a rundown between first and second. Lane Wallace was stuck on third while the Silver Sox tried to track down Brooks, who stayed alive long enough for Wallace to sneak home. Brooks even took second during the play. 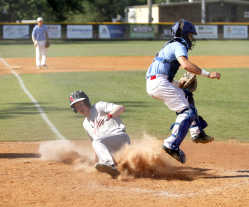 It was a crushing way for the game's first run to come across while setting the tone for an already downtrodden Silver Sox team, who finished with two errors.

"They put the ball in play a lot, but we just didn't come ready to play," Silver Sox coach Ryan Moses said. "That's the bottom line. They got a lot of hits, but we just couldn't make a play to save our life the entire game. There was no fire, no want to be there. Just a bad day of baseball. No good all the way around."

While Ultimate Baseball poured on runs, their starter held down Sikeston's offense.

"I thought he was pretty consistent and established his fastball. He looked good," French said. "That's probably the best outing he's had all year. I'm very proud of him."

Ultimate Baseball put the game away in the sixth after a bases-clearing double by Wallace, who finished with two hits and four RBIs.

"These guys aren't playing tight at all. They're upbeat after playing high school ball," French said. "Summer ball is supposed to be fun and they're just having fun playing baseball. I think that's carrying over."

Ben Ray got the loss on the mound for Sikeston after three innings. Bryce Bays finished out the remaining 2 1/3 innings before the run rule went into effect.

"He threw well enough to be at least competitive that game," Moses said. "I was really encouraged with how him and Bryce threw. They both threw strikes. It just didn't work out for them."

Both teams will head into bracket play on Saturday, but it was unsure of where or who they will play because results from Ultimate Baseball's final game of the night were unavailable by press time. Pool winners get a bye in the first round in the bracket.