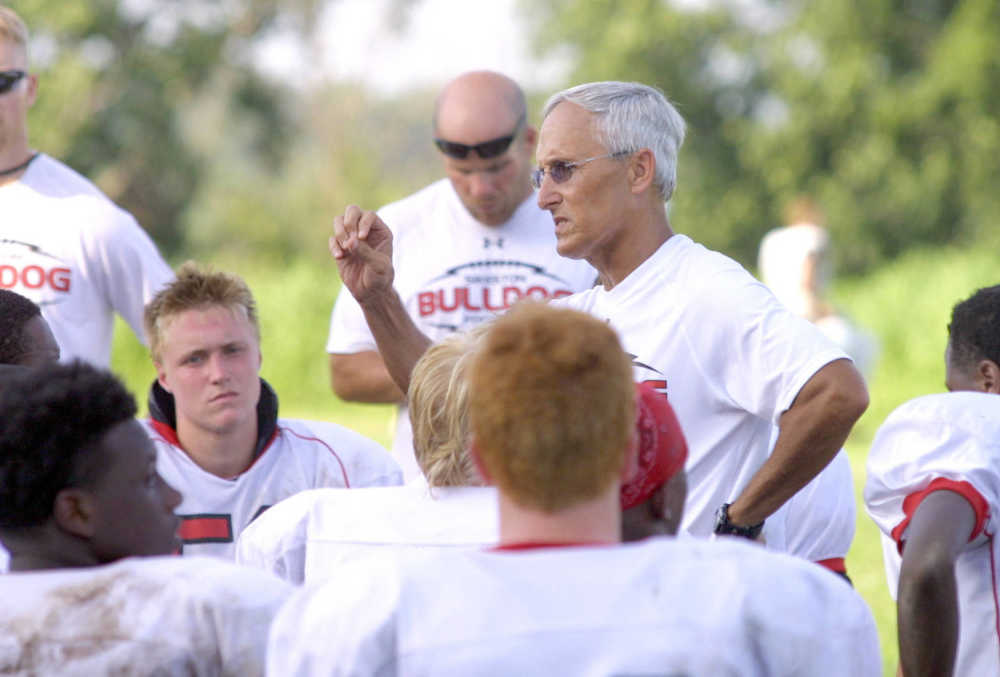 The Sikeston Bulldogs football team will take part in the annual 2017 SEMO Coaches Association Contact Camp Thursday and Friday of next week on the campus of Southeast Missouri State University in Cape Girardeau, Mo. 13 total teams are scheduled to appear. (Chris Pobst/Standard Democrat)

It gives the 11-year coach a chance to catch up with fellow coaches during the summer months when football is rarely thought of and allows his team to experience live action for the first time since October.

And although it can be viewed as laid back as two days of football scrimmages can be, the camp serves a serious and oftentimes vital purpose for Gibbs and SEMO Conference coaches alike.

The two-day camp will begin Thursday at 4 p.m. and conclude Friday at noon on the campus of Southeast Missouri State University in Cape Girardeau, Mo. 13 teams will take turns running plays against each other in at least three separate scrimmages the first night. That number will dip to 10 on Friday morning.

"I enjoy getting together in the summer time with the other coaches," Gibbs said. "Especially against the ones you know and sometimes the ones you don't. It's just nice to see coaches and compete...I think it's enabled teams to participate in a contact camp that's reasonably close and it's affordable."

Along with Sikeston, Charleston, New Madrid County Central, Malden, Caruthersville, Jackson and Cape Central are scheduled to take part and will be matched with six other schools from outside the area.

Carnahan, Roosevelt, Riverview Gardens, Mehlville, Warrenton and Memphis Academy of Health and Science round out the final teams.

It will be the first contact camp experience for Malden, Roosevelt, Riverview Gardens and Memphis Academy of Health and Science.

In the early years of the annual camp, Sikeston would routinely serve as the host utilizing Sikeston Public Schools Stadium and it's practice field. But in the past four years, the camp has moved north.

It was held at Cape Central High School for one year and for the past three years the camp has stormed the campus of Southeast Missouri State University, playing games at both Houck Stadium and the Rosengarten Athletic Complex, which rest on the south end of the varsity football practice fields.

The reason for the switch was spurred by a request from SEMO football coach Tom Matukewicz.

"When coach 'Tuke' [Matukewicz] took over he wanted the opportunity to have the camp up there and, obviously we thought that would be a good idea because it helps local football in general, and it helps the university," Gibbs said. "That's what we want to try and do as much as we can."

There's multiple benefits to the type of atmosphere the two-day camp provides, but to Gibbs, his biggest takeaway from the summer get together is noticing his squad's competition level against others and internally.

"For us, we always want to see how your kids compete," Gibbs said. "You're also looking at different kids and how they respond to competition. If you have kids that haven't been starters for you, there's some things you don't know about them."

It also gives Gibbs a chance to examine what he has, personnel-wise. Recording his team's six scrimmages will go a long way over the next month until the July 24-29 dead period ends and official practice starts July 31.

"We evaluate a lot," Gibbs said. "Really, football-wise, we won't do a whole lot more until the end of July, which is right before we get started, so what we'll do is look at the game tapes and make some evaluations and see where we may need to move some people position-wise. For us, it's a combination evaluating and see how our kids compete and see what we got.

"You can get a good evaluation of where your kids are against your other kids as far as skill level and things like that," Gibbs added. "Will we walk out of that camp and say, 'Boy, we have a really good team?' No. It's more of an evaluation against each other and where we may need to plug some holes and things like that. It's just a good time to evaluate. For me, it's a fun time. Some guys are a little bit more serious as regards to scores and things like that, but we cannot worry about the scores as much as how we compete."