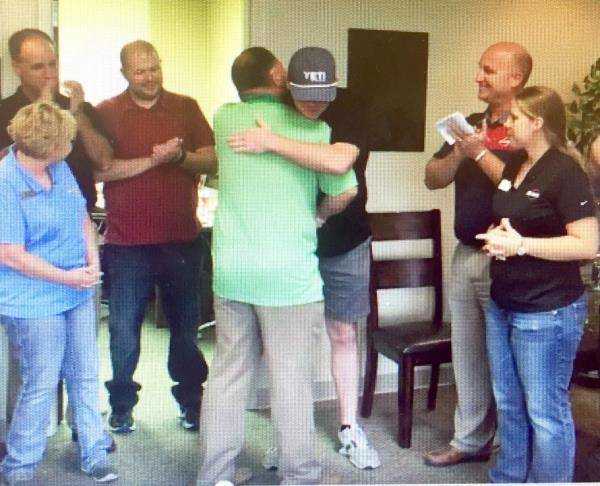 In this still image of a video posted on Rhodes 101 Stops Facebook page, Derrick Pullen (left) and Gabe McClung, both of Sikeston, hug as they meet for the first time at the Rhodes Office. McClung won the retailer’s “78 Days of Summer Fun” contest and gave
Photo courtesy of Facebook/Rhodes 101 Stops

SIKESTON -- A contest on social media garnered local attention after a Sikeston man gave his grand prize to a local family in need.

Gabe McClung of Sikeston touched the hearts of thousands when his quest to win the "78 Days to Fuel Summer Fun Contest" by Rhodes 101 Stops evolved into a mission to win for Marshall Pullen and his parents, Derrick and Stephanie Pullen of Sikeston.

Seven-year-old Marshall was diagnosed with a rare brain tumor (AT/RT) at age 3. His parents also created "Pullen for Marshall," a prayer campaign and a Facebook page of the same name to keep the community updated on his condition. To date, over 66,000 people follow the Facebook page.

Early this month McClung submitted a video entry of his trip to the convenience store with his buddies. According to Rhodes 101 officials, 125,000 people entered the contest. Then around Sept. 10 McClung was named a top 10 finalist in the promotion, and Facebook users voted for their favorite video.

In the days before the competition ended McClung asked his Facebook "friends" to vote for his video so he could share the prize with the Pullen family, whom he had never met.

"Hear me out for just a minute or so," McClung posted on his Facebook page. "I've told you all about how to vote, and I've asked for you to take time out of your day to do that for me. People have really shown me a lot of love by doing that."

He continued: "I'm no longer asking for me though. This is something I should've thought of from the beginning and realized already. I'm now asking that you vote for my video so that I can graciously win the grand prize and hand it over to people way more deserving than me.

"I hope that I have your support in attempting to win the grand prize of free fuel, food and drinks for a year for the Pullen family and Marshall Pullen," McClung posted.

He said he's followed the "Pullen for Marshall" Facebook page for close to two years now.

"It truly amazes me with how much faith, courage, resiliency and grit that Marshall Pullen and his family shows," McClung said in his Facebook post. "That's right, grit. They're constantly battling and constantly overcoming terrible situations that I can't even come close to being able to fathom. They truly are an inspiration to so many, and I honestly can't think of anyone more deserving of a prize like this than they are."

McClung said the Pullens are always driving, always having to travel to St.Louis, which means always filling up their tank.

"I really feel like this (prize) could go a long way for them," McClung said. "I've never even met Marshall and he's my hero."

"I don't know where to begin, but I'll say that if you liked, commented, shared, made your own video, or even if you only voted," McClung posted just after 8 p.m. Sept. 13 on his Facebook page. "You're the reason why this great prize is being given to an even better family. This community of people I'm friends with really amazed me with this.

He continued: "Once again, thank you from the bottom of my heart. Can not wait for the Pullen family to receive this, from our community to them!"

Then on Sept. 15 McClung was recognized at the Rhodes Office, according to the video, "Paying it Forward... to Gabe McClung," which is posted on Rhodes 101 Stops Facebook page.

During the ceremony, McClung was introduced to Derrick Pullen. Pullen and McClung embraced, and Pullen thanked him for his gift.

According to Rhodes officials, McClung set a random act of kindness standard for the community, and they wanted to pay his act of kindness forward by giving him the same grand prize he'd given to the Pullens -- a year of food, fuel and drinks valued at over $5,000.

"I feel like they could use it a lot more and something like that would go a lot further for them than me," McClung said at the time. "I think a lot of people would have done what he did if they were in his shoes."