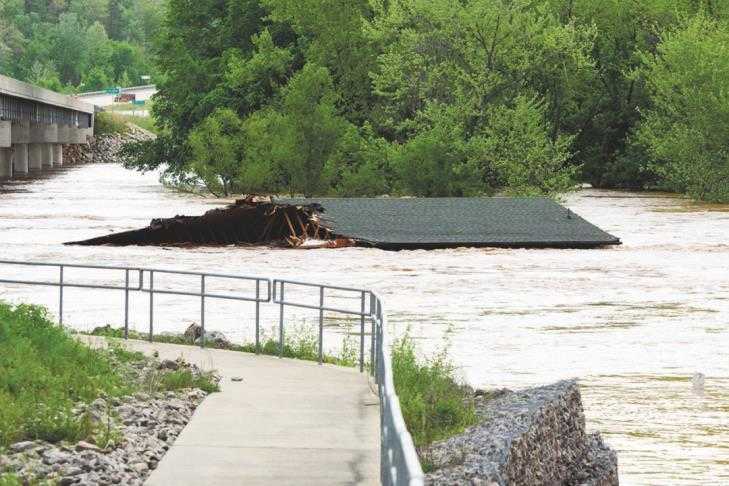 The remains of a house floats down the Current River in Van Buren, Missouri, on Sunday. Van Buren and Doniphan are experiencing severe flooding from nearby rivers.
Paul Davis ~ Daily American Republic

Flood damage is mounting to the south and west of the Cape Girardeau area, with many victims in the hardest-hit areas experiencing loss of phone service, including cellphones, and in some places electricity and tap water.

While those areas are seeing raging floods recede, those along the Mississippi are waiting as the big river is expected to crest at stages rivaling some of the highest marks on record.

But whether affected by small rivers to the south and west or to the Mississippi River near Cape Girardeau, Missouri flood victims are bracing for another serious rain event forecast in just a few days.

In Van Buren, the Current River crested overnight Sunday into Monday at 37.2 feet, according to the National Weather Service. The previous record, 29 feet, was set in 1904.

Van Buren's police department and Carter County sheriff's department were not reachable by phone Monday, but Troop G of the Missouri Highway Patrol has set up a command post in Van Buren to respond to emergency calls.

The Carter County Sheriff's office in Van Buren has been washed away.

Much of the town is inundated, with the water lines reaching roof eaves.

Lindsey said there were no active evacuation orders as of Monday morning, but there was a shelter available for people displaced by floodwaters.

"Countywide, phone systems are down," he said, adding the police department was working off a satellite phone.

Lindsey said electrical service also is down throughout the county.

The Current River at Doniphan crested at 33.13 feet Monday.

Across Missouri, roads and highways are under water, according to the Missouri Department of Transportation.

Interstate 44 in St. Louis County was expected to close after rush hour Monday and remain closed for the rest of the week, according to a news release from MoDOT.

Other areas of I-44 also are closing, including the section between Rolla and Lebanon, Missouri.

Travelers should check MoDOT's road conditions map at traveler.modot.org/map/ before heading out.

The American Red Cross shelter at Christ the Savior Catholic Church in Brewer, Missouri, was in standby mode Monday.

The city of Cape Girardeau's floodgates at Themis Street and Broadway have been closed since last week.

According to the city's website, the south railroad gate will close today.

The Mississippi River is expected to crest at 48.5 feet at Cape Girardeau on Friday into Saturday, according to the National Weather Service at Paducah, Kentucky.

Stan Polivick, assistant public works director, said: "We are expecting a crest near record level. The forecast is showing a very quick rise."

He said the water should recede quickly, too, and may be below flood stage at Cape Girardeau by May 11.

The last Mississippi River flood affected 30 homes and businesses, and that many could be affected this time, he said.

Some water is seeping through the Themis Street and Broadway floodgates, but Polivick said that is normal.

"All of the gates aren't watertight," he said.

Over seven inches of rain fell in the Cape Girardeau area over the weekend, he said.

Sixteen to 17 Cape Girardeau homes had sewage backup from the heavy rains.

Most of those occurred early Sunday, Polivick said.

Cape Girardeau firefighters helped evacuate a 100-year-old woman and rescued a man from his house amid rising floodwaters.

In all, Hasheider said the department helped eight or nine people.

The National Weather Service predicts more rain midweek, with accumulations between 1 and 2 inches, depending on location.

A voluntary evacuation order for Allenville in Cape Girardeau County was issued Sunday and included a call for residents along the Diversion Channel headwaters to evacuate as well.

* Route F at Route A

* Route HH from Route OO to end of state maintenance

* Route U from Route T to Route A

* Route A from Wittenberg to County Road 448