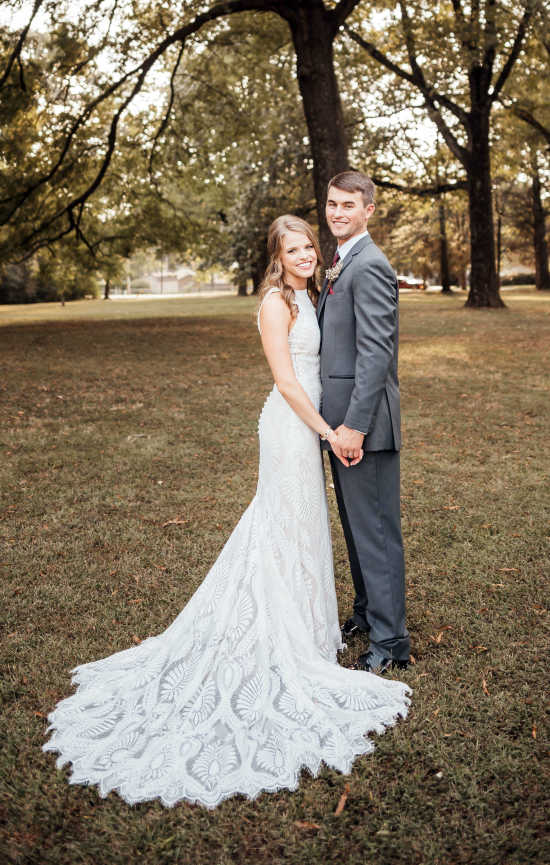 The bride is the daughter of Myron and Marla Hawes of Sikeston, Mo., and the groom is the son of Rick and Deb Kirmeyer of Olive Branch.

Providing music for the occasion was vocalist Angie Brazil with Deep Blu Entertainment.

Given in marriage by her father, the bride wore a nude underlay gown with classic white lace and beaded details.

Emma Hawes of Sikeston, sister of the bride, and Brittany Sims of Starkville served as maids of honor. Bridesmaids were Natalie Davant of Jackson; Christy Roberts of Brandon; Madison Smith of Madison; Kristen Lancaster and Shelby Muccillo of Southaven; Rachel Kirmeyer of Hernando; Sasha Vrany of Ottawa, Canada; and Chandler Wavro of Nashville, Tenn.

Tristan Stauffer, son of Mark and Jodi Stauffer of Collierville, was the ringbearer.

Ushers were Evan Rainey and Blake Brazil of Southaven.

A reception was held at Cedar Hall.

Following a wedding trip to Dominican Republic, Punta Cana, the new Mr. and Mrs. Kirmeyer are making their home in Southaven.