By David A. Lieb/Associated Press 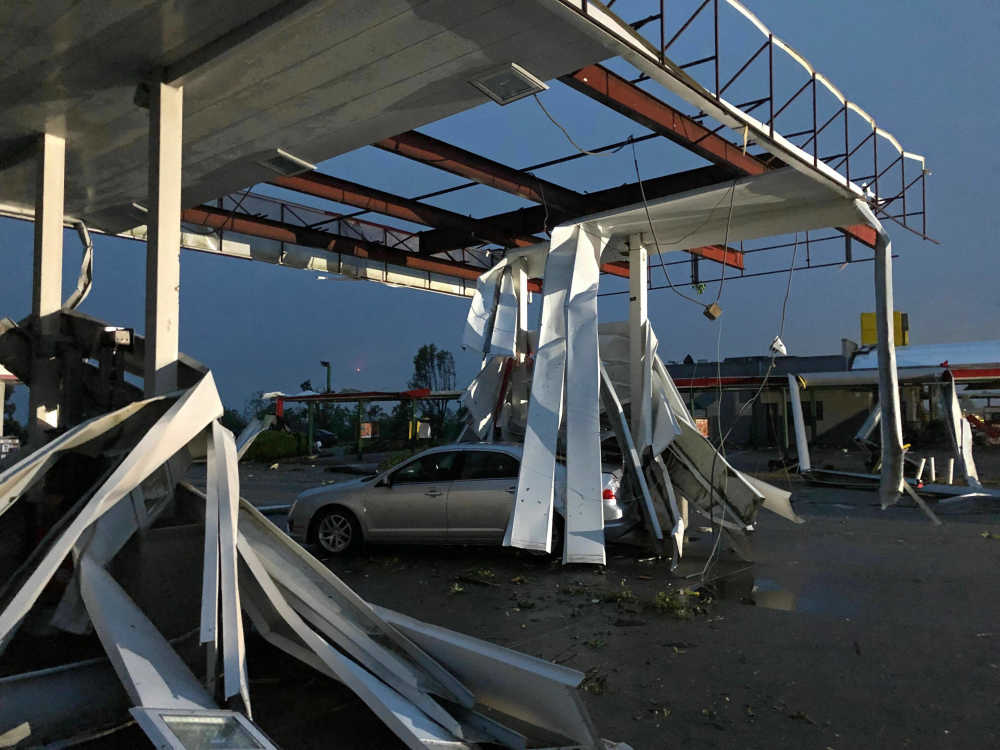 A car is trapped under the fallen metal roof of the Break Time gas station and convenience store in tornado-hit Jefferson City, MO., Thursday, May 23, 2019. The National Weather Service has confirmed a large and destructive tornado has touched down in Missouri's state capital, causing heavy damage and trapping multiple people in the wreckage of their homes. (AP Photo/David A. Lieb)

JEFFERSON CITY, Mo. (AP) — A tornado tore apart buildings in Missouri’s capital city as part of an overnight outbreak of severe weather across the state that left at least three people dead and dozens injured.

The National Weather Service confirmed that the large and destructive twister moved over Jefferson City shortly before midnight Wednesday.

“Across the state, Missouri’s first responders once again responded quickly and with strong coordination as much of the state dealt with extremely dangerous conditions that left people injured, trapped in homes, and tragically led to the death of three people,” Gov. Mike Parson said.

The tornado cut a path about 3 miles long and a mile wide from the south end of Jefferson City north toward the Missouri River, said police Lt. David Williams. Emergency workers reported about two dozen injuries, Williams said, and dozens of people were in shelters. Hospitals reported treating injuries such as cuts and bruises.

There were no immediate reports of any deaths or missing people in the capital city of about 40,000, but door-to-door checks were ongoing as of late morning.

Weather forecasters had been tracking the storm before it arrived in the capital city, and sirens first sounded in Jefferson City at 11:10 p.m. — about 30 minutes before the first property damage. Parson credited the warning system in central Missouri for saving lives.

The three deaths happened more than 150 miles away near Golden City in Missouri’s southwestern corner.

Kenneth Harris, 86, and his 83-year-old wife, Opal, were found dead about 200 yards from their home, and Betty Berg, 56, was killed and her husband, Mark, seriously injured when their mobile home was destroyed, authorities said.

National Weather Service meteorologist Cory Rothstein said it’s possible that tornado had a 50-mile path and could have been on the ground for 80 minutes. Teams were surveying the path Thursday and trying to determine whether one or multiple tornadoes had touched down.

The severe weather moved in from Oklahoma, where rescuers struggled to pull people from high water. This week has seen several days of twisters and torrential rains in the Southern Plains and Midwest.

Kerry Ann Demetrius locked herself in the bathroom of her Jefferson City apartment as the storm approached.

“It sounded like stuff was being thrown around, everything was just banging together, and then it just went dead silent,” she said. She emerged to find the roof had been blown off her apartment building.

Austin Thomson, 25, was in the laundry room of his complex of two-story apartment buildings in Jefferson City when he saw sheets of rain coming down and a flagpole bend and slam to the ground in the wind. The windows broke, and he dove behind the washers and dryers.

At the Cole County Sheriff’s office in Jefferson City, insulation, shingles and metal pieces lay on the ground outside the front doors.

Jefferson City school district offices were closed because many of its buildings were without power and sustained damage overnight. The state high school track championships scheduled this weekend in the city were moved to different sites in central Missouri, after the Missouri State High School Activities Association issued a release that warned, “Do not travel to Jefferson City.”

Another natural disaster could be imminent in Jefferson City. Most of the city, including the area tornado-ravaged section, sits on a bluff overlooking the south side of the Missouri River. But the swollen river is projected to top a levee on the north side of the river by Friday, potentially flooding the city’s airport, which already has been evacuated.

The weather service had received 22 reports of tornadoes by late Wednesday, though some may have been duplicate sightings of the same twister.

A tornado also skipped through the town of Eldon, population 4,900, about 30 miles outside Jefferson City, where it damaged the business district and “tore up several neighborhoods,” Miller County Emergency Management Director Mike Rayhart said.

He said several people were injured seriously enough to be sent to the hospital, but he did not have specifics.

A twister also caused damage and several injuries in the town of Carl Junction, not far from Joplin, on the eighth anniversary of the catastrophic tornado that killed 161 people in that city.

The severe weather was expected to push eastward Thursday, with forecasters saying parts of the Ohio Valley and the mid-Atlantic — including Baltimore and Pittsburgh — could see tornadoes, large hail and strong winds.

Storms and torrential rains have ravaged the Midwest, from Texas through Oklahoma, Kansas, Nebraska, Iowa, Missouri and Illinois, in the past few days.

Two barges carrying a total of about 3,800 pounds of fertilizer broke loose Thursday and floated down the swollen Arkansas River in Oklahoma, spreading alarm downstream as they hit a dam and sank. On Facebook, Webbers Falls, Oklahoma, warned the town’s 600 residents: “If the dam breaks, it will be catastrophic!! Leave now!!”

The barges had been floating out of control, on and off again, since Wednesday night near the town of 600, which was under a mandatory evacuation order due to flooding concerns. Aerial footage from the Oklahoma City television station KFOR showed the moment of impact shortly before noon Thursday.

Missouri’s three tornado fatalities bring to seven the number of deaths from storms this week.