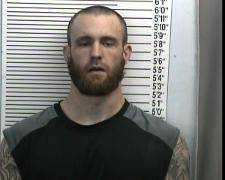 Tarver was arrested May 10, 2018, following a narcotics investigation by officers with the Missouri State Highway Patrol and Southeast Missouri Drug Task Force in New Madrid County. During the investigation, Tarver agreed to sell marijuana and Percocet to an undercover officer.

According to the probable cause statement, the undercover officer was waiting in his vehicle at Tarver’s residence when Tarver placed the barrel of a handgun to the officer’s head and demanded money. The officer then handed Tarver $160 in cash.

Additional officers responded to the residence, where Tarver was taken into custody. According to the probable cause statement, as Tarver was being arrested, he stated he knew the undercover officer “was a cop” and also explained “it was just a BB gun” he pointed at the officer.

In a search of the residence, officers found the gun used in the robbery as well as money, which was identified by its serial number as that taken from the undercover officer.

Also the undercover officer had a hidden audio/video recorder with him during the transaction. The audio of the exchange between Tarver and the officer was played for the jurors during the presentation of the evidence.

According to New Madrid County Prosecuting Attorney Andrew Lawson, formal sentencing is set for 1 p.m. July 23.  First degree robbery carries a range of punishment of not less than 10 years nor more than 30 years or life in prison.  By law, Tarver will have to serve 85 percent of any sentence he receives, Lawson said.