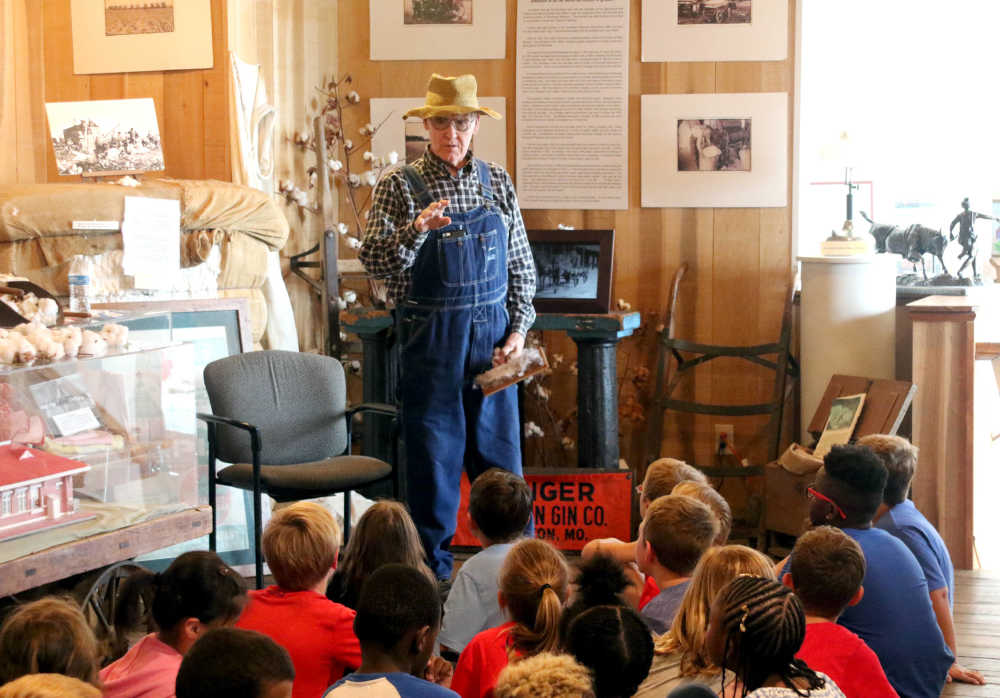 SIKESTON — From the mound builders to city founder John Sikes escaping hanging to the digging of the Little River Drainage District, fourth graders learned about the history of Sikeston at the annual Fourth Grade Historical Interpretive Tour held at the Sikeston Depot Museum and Cultural Center held this week.

Fourth grade classes in the Sikeston Public School District and private schools — about 300 students and their teachers — visited the Depot Tuesday, Wednesday and Thursday to learn about local history through a live, interactive presentation.

The students were greeted outside by Connie Thompson and then received a visit from Lee Brown, dressed as John Sikes, who founded the City of Sikeston. After hearing Sikes’ story, the students moved indoors where they learned about the Indians who first inhabited the area, to the time of early settlers of Missouri to the construction of the Little River Drainage District in the early 1900s, all from enactors in period costumes portraying key people and events that helped settle Sikeston and the surrounding area.

Students were also taught about farming in the area and history in the area through World War II.

The program was in conjunction with the Elementary division of the Sikeston Public and Private Schools, the Missouri Humanities Council, the Missouri Arts Council and the Sikeston Depot Museum and Cultural Center. The undertaking coincides with the fourth grade program of study about the history and the state of Missouri, which is currently being studied in all fourth grade classes in Sikeston.

“We seek to offer an additional dimension to that study and give the fourth graders new insights into their own community,” said Janice Matthews, a member of the SCDC Board.

This was the fourth year of the program, coordinated by SCDC Board members: Dr. Larry Bohannon, Dr. Sharon Gunn, Matthews and Thompson.