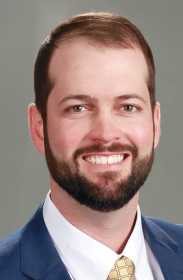 The Young Bankers Leadership Award recognizes Fayette’s triumphs in his role and community involvement. The Missouri Bankers Association is a statewide trade and professional organization in Jefferson City that represents the interests of 259 banks in Missouri.

“When I joined First State Bank & Trust Co., Inc. in 2014, I put all of my energy into providing the best service to our customers,” said Fayette, North Market President. “Knowing superior customer service is more than a friendly face, I’ve been deeply involved with community projects along with local nonprofits.”

“Zach has fully immersed himself in his role,” said Matthew Drake, CEO at First Bank & Trust Co. Inc. “To him, that means boosting others, dedicating himself to bettering the community and remaining agile when the customer needs a shift. He is a natural leader.”

Before joining First State Bank &Trust Co., Inc., Fayette worked as a bank regulator at the Office of Comptroller of the Currency (OCC), later joining FSBT as vice president/commercial loan officer. In 2016, Fayette was promoted to North Market President.

Fayette received his bachelor’s degree from the University of Missouri in 2008 and graduated from the LSU Graduate School of Banking in 2014.