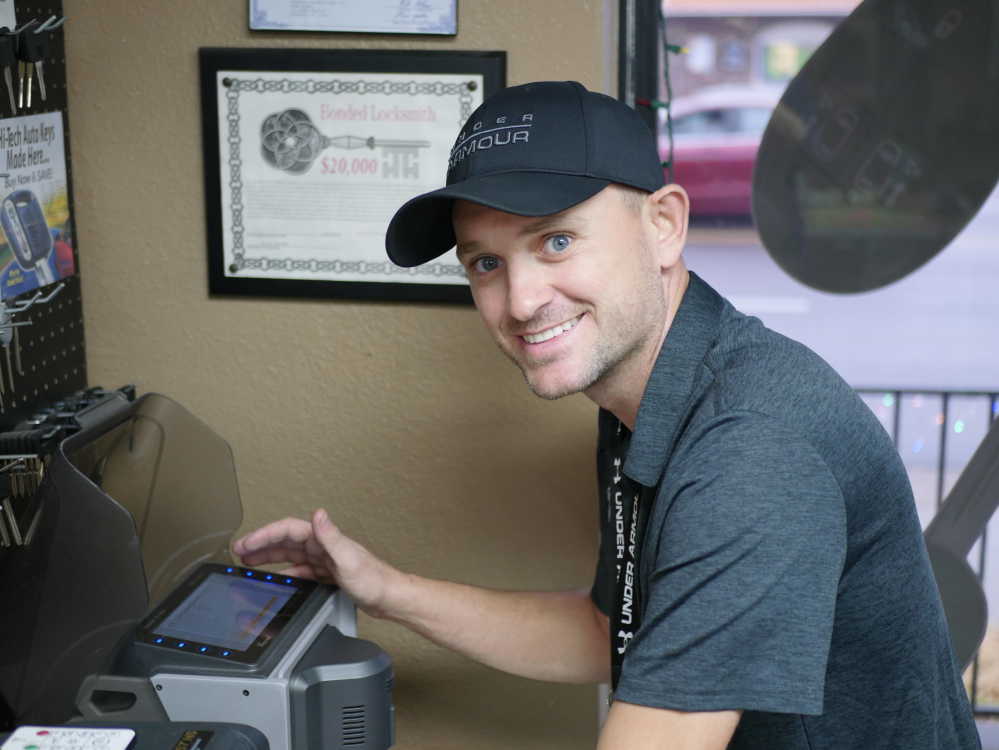 SIKESTON — For Joshua Holmes, owner of Security Locksmith Shop and Door Service, the path to his career wasn’t a normal one.

“Fascinating story,” Holmes said. “My dad wanted a retirement plan from the highway department, so he agreed to spend everything he had saved on the locksmith company that his brother in-law worked at, with no intention of actually learning the trade.”

Two weeks into his dad’s purchase, the locksmith quit and Holmes’ father found himself with a bunch of jobs to do, the phone ringing off the hook with no knowledge of how to do it other than his carpentry skills.

“A year later, he was working at night at the station and was robbed and ended up being shot,” Holmes said. “At the time, I was 14 and not ready for what was happening.”

Still a teenager, Holmes news they had a business to run to pay the bills. With his dad in intensive care, Holmes cleaned up the crime scene and readied the business to open.

“When (dad) came home, he wanted to go back to work but couldn’t drive, so we started off with me and his lifelong friend, Tony Stricklin, driving him to and from jobs, then it moved to me holding tools for him, then actually doing the job with him,” Holmes said.

Four years later, Holmes was working full-time and the day after graduating from high school, he started working 12-hour days. Five years later, Holmes bought the company from his father and has since went from one van and two employees to four company trucks and six technicians.

Holmes loves that he gets to help people every day.

“I have had a lot of hugs and great reviews from getting cars unlocked when babies get locked in,” Holmes said.

However, Security Locksmith is more than just opening locks. They are able to adapt and modify their service to whatever the customer needs.

“We may be working on the lock but the door needs repaired so we become carpenters,” Holmes said. “Your key may not turn your ignition but it is really a sensor behind it, so we become mechanics.

“We have a saying, ‘whatever it takes to get the job done.’”

Holmes said the biggest challenge they have is getting people to realize what all Security Locksmith can do and offers.

“Doors, remotes, remote batteries, keypads, hinges, panic bars, ignition repairs and that is just a fraction (of what we offer),” Holmes said. “We really do it all.

“Everything we do is to help our community, from investing in the latest equipment to expanding our knowledge to keep up with the latest vehicles.”

Security Locksmith Shop and Door Service is located at 310 N. Main in Sikeston, across from Walgreens. They can be reached at 573-471-4473 or be found online at www.securitylocksmithshop.net.