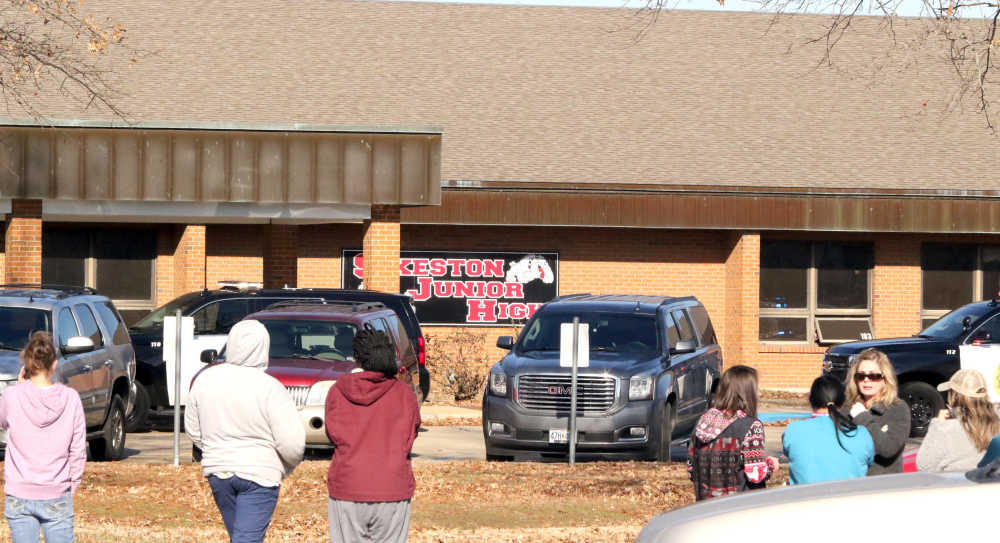 SIKESTON — Parents and students received a scare Thursday morning as a report of shots fired at the Sikeston Junior High School was reported to the Sikeston Department of Public Safety. Fortunately no shots were fired and no students or staff were injured.

According to Sikeston DPS Public Information Officer Evelyn Aceves, a call came to DPS at 10:33 a.m. when a student reported they heard “loud noises” at the junior high. This was later confirmed by one teacher.

Sikeston schools were immediately put on lock down and DPS officers along with officers from the Missouri Highway Patrol and Scott County Sheriff’s Office went to the junior high and high school.

“DPS responded very quickly, in about 30 seconds, to secure and lockdown the junior high,” said Sikeston Superintendent Dr. Tony Robinson. “The high school was also locked down as a precaution due to vague threats last week. We wanted to be extra safe.”

The Scott County Sheriff’s Office and Missouri State Highway Patrol also responded to aid DPS officers in searching the buildings. After an extensive search of the junior high, law enforcement didn’t locate any threats and the school was released from lockdown shortly after. Aceves said law enforcement still doesn’t know what the student and teacher heard.

“We understand that a significant amount of law enforcement officers from the region responded today,” Aceves said in a release. “This is part of our response plan to quickly address any possible threats like this in the schools. As part of this response, a significant amount of searching was conducted to ensure the safety of the students. The number of officers who responded made this a quick task.”

Robinson said the school’s and law enforcement emergency policies in a situation like this worked extremely well.

“I can’t commend DPS, county officers and the Highway Patrol enough for their quick response and how they took care of our students and staff,” Robinson said. “I want to commend our staff too because they responded properly as well.”

As word got out about the situation, many parents showed up to the junior high to check on their children and Robinson thanked the parents for their patience and allowing law enforcement and school officials to do their jobs.

Both Robinson and Aceves remarked that school officials and law enforcement work closely together to address prevention and responses to possible violence in the R-6 schools.

“Currently we have an excellent working relationship with school officials,” said Aceves. “We routinely take steps to improve security and response.”

Robinson said a letter would be sent to parents through social media Thursday to explain what happened and reassure them of the safety of the schools.

Aceves said she encourages parents to follow the Sikeston DPS Facebook page as well as the Sikeston R-6 Facebook page. “In the event of a false alarm like today, this will be the quickest way that we can notify you,” she said.

Sikeston DPS encourages everyone to report any threats or suspicious activity to law enforcement.

“We will always take those threats seriously and are committed to the safety of our students and staff at all of our local schools,” Aceves said.