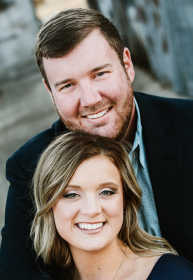 SIKESTON — Kimberly Alley of Sikeston has announced the engagement of her daughter, Hailey Elizabeth Alley, to Clayton Bryan Driskill, son of Charlie and Nancy Driskill of Sikeston.

A 2013 graduate of Thomas W. Kelly High School in Benton, the future bride earned a Bachelor of Science in business administration-management from Southeast Missouri State University in 2016. She is a data analyst for First State Bank and Trust Company, Inc.

The prospective groom is a 2012 graduate of Sikeston High School and earned a Bachelor of Science in business administration-finance and accounting from Avila University. He is a licensed CPA and financial reporting analyst for Farm Credit Southeast Missouri.

Plans are being finalized for a Feb. 29 wedding.