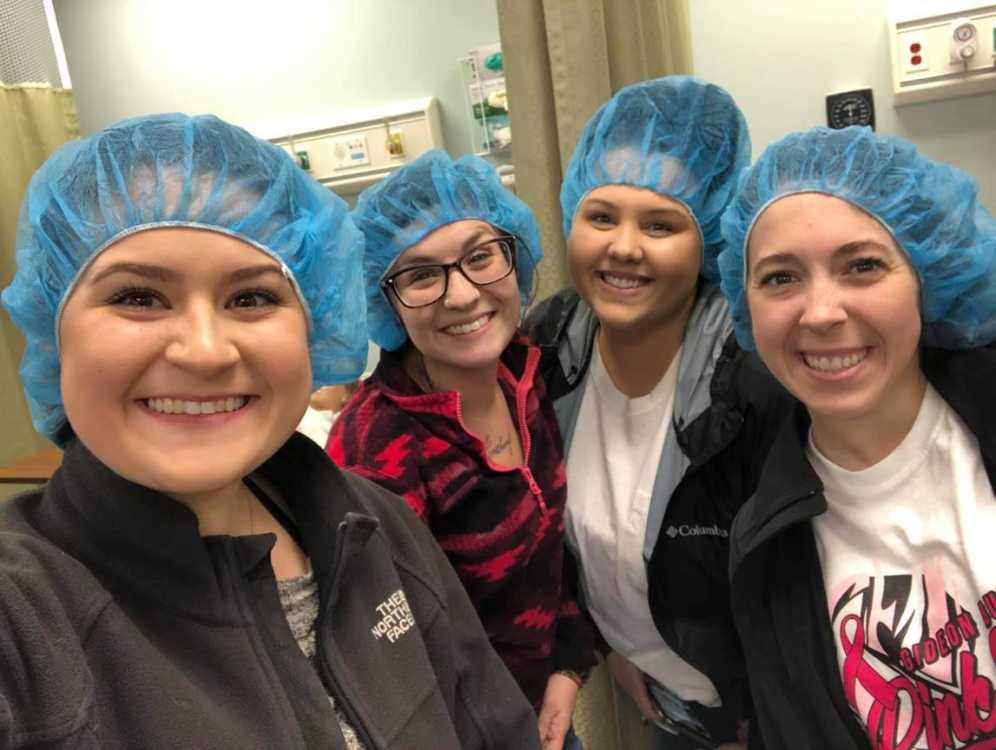 Allie Stephenson of Risco, Hannah Sauceda of Sikeston, Alison Staggs of Sikeston, and Jana Stanfield of Gideon spend time together on the second day of classes.
Photo provided

TRC took over the program, which used to reside with the Sikeston Career and Technology Center, over the summer when the State Board of Nursing approved the transfer.

“(Sikeston CTC) made the decision last year to close the program,” said Dr. Staci Foster, TRC department chair of Nursing and Allied Health. “When they made that decision, Three Rivers College reached out and said ‘can we take over sponsorship of it’ because we need LPNs in the region ... essentially what we did is instead of closing it down, we actually just relocated it into our facilities in Sikeston.”

Since the Sikeston campus already offered an LPN-to-Registered Nurse bridge program, it didn’t prove difficult to add an LPN program. Foster said they needed to expand the clinic room from five beds to eight.

In the room, students work with stand-in patients to get practice with a procedure before performing it on a human patient.

According to practicalnursing.org, LPN education focuses on the skills required to perform tasks. RN programs focus on both performing the tasks and rationalizing the medical reasons behind the care. Jobs can involve RNs in developing care plans for patients.

LPN is a year-long program from January through December in Sikeston. TRC Sikeston also offers the bridge program between the two where somebody licensed as an LPN can take additional classes for about three semesters to became an RN.

Students in the LPN program get started with topics such as fundamentals of nursing, body structure and hand hygiene.

The program can accept 30 students per class and started the semester with a full class.

“That was a little difficult to do because not a lot of people knew we received the program,” Foster said. “There was a lot of talk or miscommunication, I guess, in the area that the program had been closed, because it had been closed with the Sikeston public schools, but we had opened it. It was never technically closed.”

Foster said she’s proud of getting a full class and had alternate students lined up in case some of the original students changed their minds.

“We’ve actually had really good interest in the program so far,” she said.

The goal, Foster said, is to make the program successful by focusing on the quality of education provided, with a good retention and graduation rate.

Job prospects for the students are good, she said. They expect 100% employment for anybody graduating out of the program, which is similar to the rate for Poplar Bluff LPN students.

With instructors, Foster said she could hire them months before the program starting classes and all of them have practiced as a nurse.

The biggest focus with the program, in the early stages, was getting those instructors trained on being educators for what they already knew.

Going forward, Foster said, the college wants to expand the program if the need is there.

“We watch our application numbers closely and if we see that we have a greater need, we could always petition the State Board of Nursing for additional seats,” she said. “But that’s a long-term process and we will really watch our numbers on that before we make any decisions.”

One thing the program still needs, Foster said, is more clinical sites. These are facilities where students can go to practice on actual patients, while being supervised, and put the skills they’re learning to use. To receive their license, students must clock a certain number of clinical hours.

Students spend some of these hours in the simulation labs, but Foster said LPN students also go to long-term care facilities, clinics and hospital facilities for some acute care.

“Those have come fairly easily,” Foster said. “The community has rallied and wants us in their facilities. That’s been more about making the connections.”

The application process for the program includes an admissions test that covers reading composition, science and math. Foster said the test is good for a year and students can retest if they’re not happy with their score. Applications for the program are due by Oct. 1. Students must have a high school diploma or equivalent to start the program.