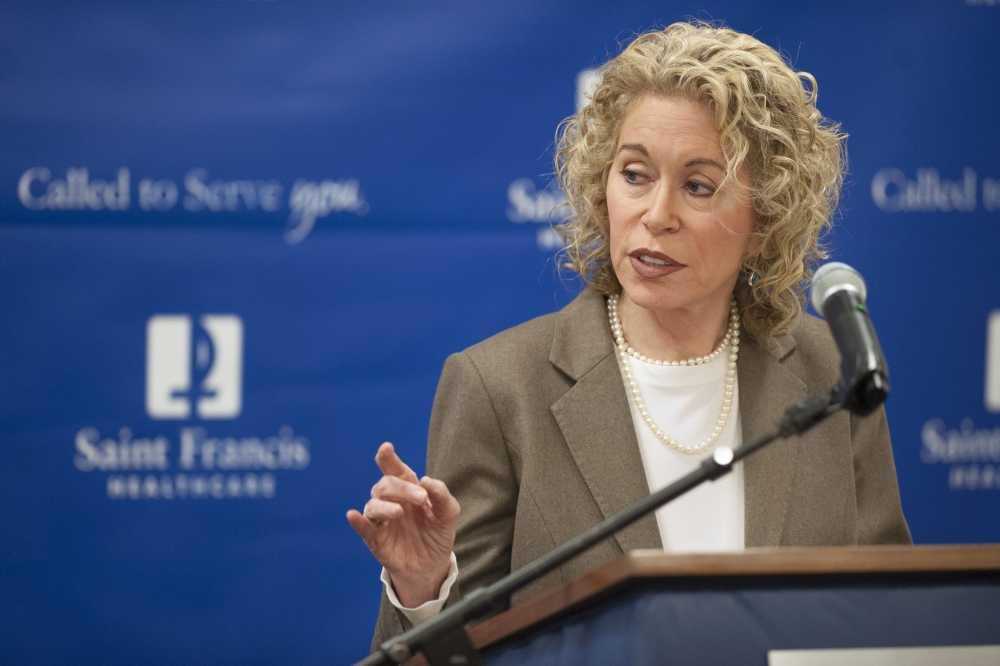 Maryann Reese, president and CEO of Saint Francis Healthcare System, reads a prepared statement announcing the termination of the medical center's contract with United Healthcare on Monday inside the All Saints Conference Center at Saint Francis Medical Center in Cape Girardeau. Saint Francis facilities will be out of network with United on March 5.
Ben Matthews/Southeast Missourian

Officials with Saint Francis Healthcare System announced Monday morning UnitedHealthcare has terminated its contract with the entity as the two negotiate rates for services provided at Saint Francis’ facilities.

The situation would put Saint Francis facilities “out of network” for United customers, meaning customers would pay higher rates for services such as cancer treatment, surgery and laboratory testing provided at Saint Francis.

Individual physicians, however, operate under a separate contract, which is still in effect. That contract is up for renewal in June.

Emergency services would not be affected.

If the parties fail to reach an agreement, patients receiving long-term care — such as expectant mothers and those undergoing cancer treatment — who want to continue to use Saint Francis facilities with in-network pricing will have to receive permission from United to do so.

United — the largest health care company in the world with revenue of $242 billion and profit of $18.5 billion in 2019 — accounts for about 5% of Saint Francis’ customer base, according to Maryann Reese, Saint Francis president and chief executive officer.

At a Monday morning news conference, Reese said United asked the health care system to accept payment cuts of between 20% and 30%. Such “radical” cuts would be “unsustainable,” she said, pointing to voluntary cost cuts implemented by Saint Francis the past two years of 15% and 10%, respectively.

“This puts at risk our ability to deliver mission-driven health care to the communities we are privileged and called to serve,” she said.

“It didn’t have to be this way,” he said. “But they’re not from here. They don’t care. Their kids don’t play Little League with ours, and we don’t go to church together.”

“We’re a rounding error to them,” she said.

UnitedHealthcare did not have an immediate comment Monday morning.

Regarding patient impacts, Jessica Lemmons of Saint Francis’ obstetrics and gynecology department said insurance uncertainty creates unnecessary stress for her patients. She said patients who must transfer their care from one provider to another will likely suffer anxiety during the process.

“That’s what bothers me,” she said.

Saint Francis has created a website — www.keepusin.com and a hotline (573) 331-5217 — where patients may access information about the situation.

Burke said Saint Francis and United continue to negotiate the contract, but he expressed little confidence in a resolution. Looking beyond United, Burke said Saint Francis is considering a direct-provider scenario in which Saint Francis would serve as a de facto insurer. Such accountable care organizations are allowed under the federal Affordable Care Act. Though Saint Francis had anticipated rolling out such a program over a two-year window, the United situation may “speed up” the process.