Millions holed up at home as virus profoundly shifts US life 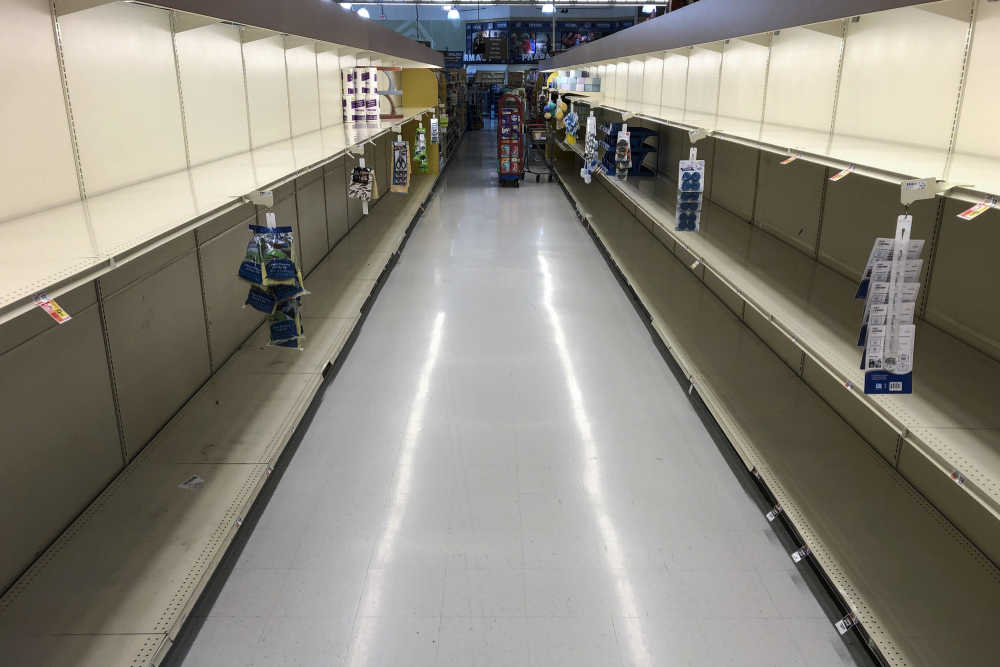 This Monday, March 16, 2020 photo shows empty shelves at a grocery store in Willow Grove, Pa., Shoppers have been buying up extra quantities of the products since the outbreak of the coronavirus. According to the World Health Organization, most people recover in about two to six weeks, depending on the severity of the illness.
AP Photo/Matt Rourke

MINNEAPOLIS (AP) — Millions of Americans began the work week holed up at home against the coronavirus Monday, worried not just about getting sick but about what the unprecedented near-shutdown of the U.S. could do to their jobs and their savings.

With wide swaths of the economy shuddering to a halt, stocks nosedived more than 11% on Wall Street at one point in the morning, in a sell-off so fast that it triggered an automatic 15-minute halt to trading.

The best-case scenario for many investors now is that the economic shock will be steep but short, with growth recovering later this year as stores and businesses open back up. Pessimists, though, are preparing for a longer haul.

The U.S. surgeon general, meanwhile, said the number of coronavirus cases in the United States has reached a level comparable to what disease-battered Italy recorded two weeks ago — a signal that infections are expected to rise in America.

"We are at a critical inflection point in this country, people," U.S. Surgeon General Dr. Jerome Adams told Fox News. "When you look at the projections, there's every chance that we could be Italy."

Two weeks ago, there were 1,700 cases of coronavirus in Italy and the country had reported 34 deaths. Now, Italy is reporting an estimated 25,000 cases and more than 1,800 people have died.

The U.S. has recorded about 3,800 infections and at least 66 deaths, two-thirds of them in hard-hit Washington state.

The head of the World Health Organization called the outbreak the "defining global health crisis of our time," noting that testing is the top priority.

"You cannot fight a fire blindfolded, and we cannot stop this pandemic if we don't know who is infected," said Tedros Adhanom Ghebreyesus . "We have a simple message for all countries: Test, test, test."

The U.S. has been slower than many countries in ramping up its testing capability, though the White House announced a string of measures last week to speed up the process.

Across the country, health officials, politicians and business leaders talked about "social distancing" and "flattening the curve," or encouraging people to avoid others so as to slow the spread of the virus and keep U.S. hospitals from being overwhelmed with a sudden deluge of patients.

A healthy volunteer became the first participant in a clinical trial of an experimental vaccine against the virus, receiving a dose at a research institute in Washington state. Public officials cautioned, however, that it will still take a year to 18 months to fully test and approve any vaccine.

The wheels of justice slowed too, as the U.S. Supreme Court put oral arguments on hold — including fights over subpoenas for President Donald Trump's financial records — for the first time in over 100 years. Six of the nine justices are 65 and older, at higher risk of getting very sick from the illness. Two are in their 80s. The court last postponed arguments during the 1918 flu pandemic, which killed millions of people.

Most people who come down with the disease have relatively mild symptoms, but it can be deadly for some, especially the elderly and those with underlying health problems. Most people infected with the virus recover in a matter of weeks.

Over the weekend, governors and mayors closed restaurants, bars, and schools as the nation sank deeper into crisis. Travelers returning home from abroad were stuck in line for hours at major airports for screenings, crammed into just the kind of crowded spaces that public health officials have urged people to avoid.

Around the country, people rushed to line up child care and make arrangements to work from home or tried to figure out how to entertain themselves now that nearly all social gatherings have been banned, canceled or strongly discouraged.

Some people planned to binge-watch TV, catch up on chores such as cleaning out the basement, exercise at home instead of the gym, do more cooking or read more.

"We're catching up on our reading. I just started `Love in the Time of Cholera.' It seemed appropriate," said Beverly Pfeiffer in Silver Spring, Maryland, of the Gabriel Garcia Marquez classic.

More than 650 members of the National Guard have been called up by governors in 15 states to help deal with the crisis by doing such things as distributing food and sanitizing public areas.

Trump sought to calm a jittery nation by declaring the government has "tremendous control" over the situation and urging people to stop the panic-buying of grocery staples that has depleted store shelves nationwide. Gun stores started seeing a similar run on weapons and ammunition as the fear intensified.

For many Americans, the sudden economic shift means life could soon be very hard.

Tyler Baldwin, a bartender at the Taproom in Seattle's Pike Place Market, one of the city's biggest tourist attractions,, was mopping up Sunday night after Washington Gov. Jay Inslee said he would order all bars and restaurants to close.

Baldwin, 29, said he was shutting down early "so I can go home and start figuring out unemployment, food stamps, really whatever the next step to keep myself afloat."

In a letter to Trump and congressional leaders, the U.S. Chamber of Commerce called for swift legislation, including a three-month cancellation of some taxes and an expansion of loans to businesses, to "mitigate the potentially devastating economic effects."

As Americans struggled with changing their daily habits, the Centers for Disease Control and Prevention issued a dramatic recommendation: It said gatherings of 50 people or more should be canceled or postponed throughout the U.S. for the next two months.

But in a sign of the difficulty of striking the right balance, the CDC statement also said the recommendation does not apply to "the day-to-day operation of organizations such as schools, institutes of higher learning, or businesses."

Finding that balance is also a challenge for businesses dependent on bringing people through their doors.

Casinos in at least 15 states have shut down in the past few days. But many more gambling halls remain open, where hundreds or even thousands of people touch the same slot machines and poker chips, risking spreading the virus. The casinos said they are doing more cleaning.

Even before the warning, parts of the country already looked like ghost towns, with more places to follow, as nightspots closed in one city or state after another.

"The time for persuasion and public appeals is over," Illinois Gov. J.B. Pritzker said. "This is not a joke. No one is immune to this."

"These places are part of the heart and soul of our city," he said in a statement Sunday night. "But our city is facing an unprecedented threat, and we must respond with a wartime mentality."

His decision came after Dr. Anthony Fauci, the federal government's top infectious-disease expert, said he would like to see a 14-day national shutdown imposed to prevent the virus's spread.

"I think Americans should be prepared that they are going to have to hunker down significantly more than we as a country are doing," he said.

There was no indication Trump is considering such a move.

The worldwide outbreak has sickened nearly 175,000 people and left more than 6,500 dead, with thousands of new cases each day.