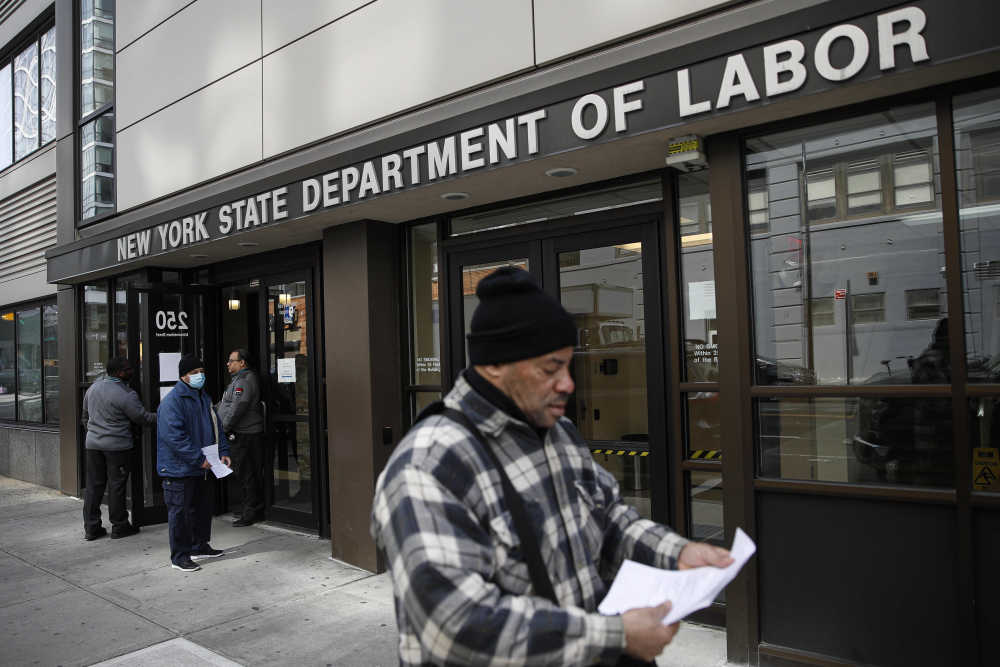 FILE - In this March 18, 2020 file photo, visitors to the Department of Labor are turned away at the door by personnel due to closures over coronavirus concerns in New York. A record-high number of people applied for unemployment benefits last week as layoffs engulfed the United States in the face of a near-total economic shutdown caused by the coronavirus. The surge in weekly applications for benefits far exceeded the previous record set in 1982.
AP Photo/John Minchillo, File

NEW YORK (AP) — With record-high numbers of Americans seeking unemployment benefits after losing their jobs because of the coronavirus, Congress is set to significantly enhance the program.

The $2.2 trillion rescue package nearing final approval will, for four months, add $600 a week to standard unemployment benefits, which vary by state. It also provides funding for states to let people collect their payments immediately, eliminating a one-week waiting period. And it adds 13 weeks of coverage for people who have exhausted their existing jobless benefits.

Perhaps most significantly for a large swath of America's workforce, the legislation for the first time makes gig workers, independent contractors, the self-employed, people with limited work history and part-time workers eligible for unemployment benefits.

Such short-term measures are meant to shore up a system that wasn't designed to cope with a surge of people suddenly thrown into the ranks of the unemployed.

Among the people being hit hardest by layoffs as businesses have shut down across the country are employees of restaurants, hotels, airlines and retailers. Business activity at such companies has plummeted or vanished altogether as much of America stays home to help contain the spread of the virus. Incomes of taxi and ride-hailing drivers have cratered as passengers have all but disappeared.

Brian Alectine, who drives for Lyft and Via in New York City, stopped picking up passengers a week ago out of fear that he would contract the virus. He is holding out hope that he will be able to receive unemployment benefits. But even so, he worries that he may need financial aid before payments kick in.

Alectine must still pay $350 a week to rent his car, along with rent on the apartment he shares with his wife, their 4-year-old daughter and his mother-in-law.

"I know April 1 my landlord is going to text me and ask me if the money is ready, so I'm very worried about those things," he said.

Besides the expansion of unemployment benefits, the legislation provides aid for vulnerable workers in other ways, too. For many households, there will be a one-time direct payment of $1,200 per adult, plus $500 per child. There are also incentives for employers to keep workers on the payroll, including tax breaks. Small businesses that receive loans under the package won't have to repay money they use to pay employees.

Congress has acted much more quickly to provide aid to workers than it did during the Great Recession. Unlike the aid that Congress provided a decade ago, the current rescue package will provide substantial assistance to workers who have lost their jobs and is intended to enable them to keep up with fixed expenses.

The Century Foundation, a progressive think tank, estimated in a study that up to 11 million workers could benefit, depending on how many lose their jobs. The foundation said the weekly $600 supplement would more than double the benefits currently available to unemployed people.

And economists at Goldman Sachs calculate that for the average worker, who earns about $1,200 a week, the enhanced weekly benefit should fully replace their lost wages. And for lower-income employees of restaurants and hospitals, it should provide more than their usual salaries.

Still, economists caution that it won't be enough to support their previous levels of spending or prevent a deep recession.

"You've got to get that cash to households to meet those bills for food, shelter, and medicine," said Jeffrey Bergstrand, a professor of finance at Notre Dame. But, he added, "this is not a stimulus package. It's to provide liquidity and ensure against deeper damage and forestall the possibility of depression."

Jade Apisuk, who was laid off from his job selling wine and liquor to hotels in and around Walt Disney World, said the extra money will be a '"huge help."

"It means I will be able to buy groceries and freeze them," said Apisuk, who lives in Orlando, Florida. "My No. 1 priority through this it just to keep food and shelter available."

Apisuk said he was able to apply for unemployment benefits early Tuesday morning after first trying Monday, when the website kept crashing. He said he would receive $275 a week from the state. That amounts to just 20% of his lost wages and is barely enough to cover his usual grocery bills. He has told his two sons that they will not be getting haircuts since they aren't going to school anyway.

Megan Greene, an economist and senior fellow at Harvard's Kennedy School of Government, said some of the impact of the benefits will be limited by the fact that many state unemployment systems are swamped with applicants. The flood of applications could delay thousands of jobless workers from being able to obtain aid. Congress has already approved legislation providing $1 billion to states to help them administer the program. But that will take time to have an impact.

One other criticism is that the onetime checks will go only to those Americans who have filed a tax return this year or in 2019.

That means "that in order to get this aid, they will have to file tax returns during this pandemic," the economists wrote.