Local newspapers are facing their own coronavirus crisis 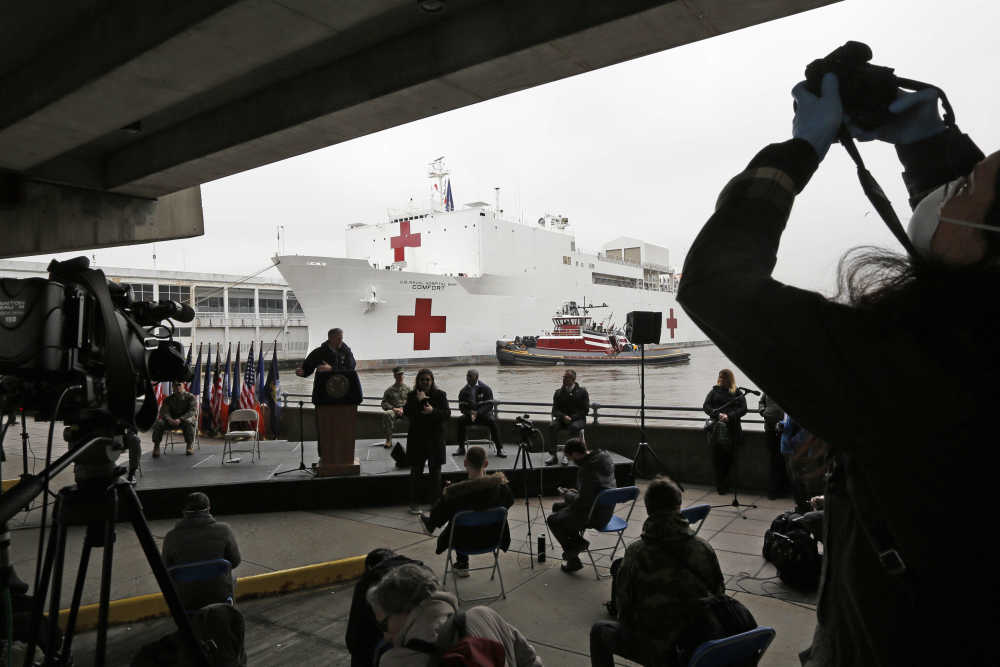 FILE - In this March 30, 2020, file photo, a journalist records a press briefing following the arrival of the USNS Comfort, a naval hospital ship with a 1,000 bed-capacity at Pier 90 in New York. People desperate for information are more reliant than ever on local media as the coronavirus spreads across the U.S. But newspapers, magazines and digital publishers are feeling the pressure as advertising craters.
AP Photo/Kathy Willens

NEW YORK (AP) — Just when Americans need it most, a U.S. newspaper industry already under stress is facing an unprecedented new challenge.

Readers desperate for information are more reliant than ever on local media as the coronavirus spreads across the U.S. They want to know about cases in their area, where testing centers are, what the economic impact is. Papers say online traffic and subscriptions have risen -- the latter even when they've lowered paywalls for pandemic-related stories.

But newspapers and other publications are under pressure as advertising craters. They are cutting jobs, staff hours and pay, dropping print editions -- and in some cases shutting down entirely.

Circulation and web traffic are up at the Sun Chronicle, a daily in Attleboro, Massachusetts, as it scrambles to cover the coronavirus pandemic. It's "all we do," said Craig Borges, executive editor and general manager. But with many local restaurants, gyms, colleges and other businesses closed, the paper has laid off a handful of sales and mailroom employees and a political reporter. It has about a dozen newsroom employees left.

"Hopefully we can work this out and make it through," Borges said.

Researchers have long worried that the next recession — which economists say is already upon us — "could be an extinction-level event for newspapers," said Penelope Abernathy, a University of North Carolina professor who studies the news industry.

More than 2,100 cities and towns have lost a paper in the past 15 years, mostly weeklies, and newsroom employment has shrunk by half since 2004. Many publications struggled as consumers turned to the internet for news, battered by the Great Recession of 2007-2009 and the rise of giants like Google and Facebook that dominated the market for digital ads.

More recently, big national newspapers like The New York Times, The Washington Post and The Wall Street Journal have diversified revenue by adding millions of digital subscribers. Many others, however, remain heavily dependent on advertising.

Twenty global news publishers recently surveyed by the International News Media Association expect a median 23% decline in 2020 ad sales. In the U.S., newspaper ad revenues have dropped 20% to 30% in the last few weeks compared with a year ago, FTI Consulting's Ken Harding wrote in another INMA report.

Further down the food chain, many smaller publishers -- particularly local alt-weeklies with a heavy focus on dining, arts and entertainment -- are making even harder decisions.

Report for America, which subsidizes journalists in local newsrooms and at The Associated Press, says some of its local-media partners report such deteriorating finances that they may not be able to pay their half of these reporters' salaries.

In suburban St. Louis last week, businesses were calling and cancelling ads as fast as editor Don Corrigan and his staff could write articles to fill the empty space left behind. A local hospital wanted to run a full-page ad offering tips to fight the virus in the three community weeklies he runs — but wanted it for free. A softhearted Corrigan agreed.

He announced this week that the Webster-Kirkwood Times, South County Time and West End World will stop publishing, although he's keeping the website running. "I don't think people realize how much it costs to put out a newspaper," he said, noting that some readers are belatedly suggesting a GoFundMe page or a paywall for the web site.

One proposal under discussion would recommend creating a federal fund to pay for government newspaper ads that offer health advice. Another possibility might be to offer people tax credits for subscriptions.

The Shepherd Express newspaper, which took its name from an Allen Ginsberg poem, has for 38 years told residents of Milwaukee, Wisconsin, about up-and-coming musicians, hot restaurants, crooked politicians and where to find hemp-related products. Last week, it suspended publication and laid off staff.

Editor, publisher and owner Louis Fortis is keeping the website operating and promises to resume printing at some point, in some form. Yet he's feeling the same uncertainty as millions of other Americans. "I'm very disappointed," he said. "On the other hand, you have to look at the big picture. People are dying."