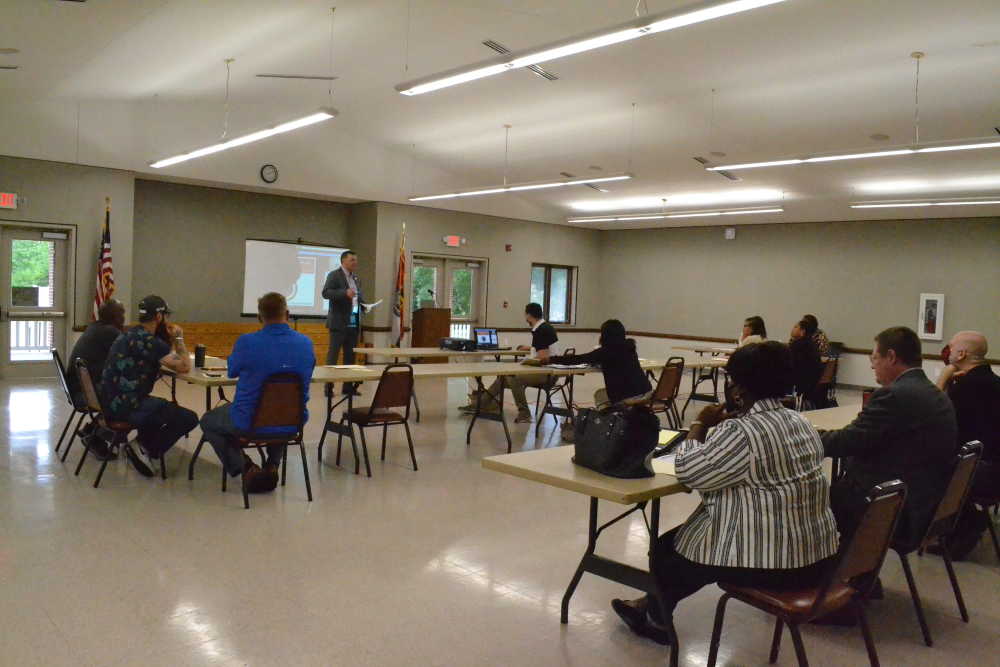 Sikeston Department of Public Safety Chief Jim McMillen speaks Friday, June 26, 2020, prior to the start of the first planning group meeting to implement the “Strengthening Police and Community Partnerships” program sponsored by the Department of Justice. Various city officials and community members met virtually with Rita Valenciano of Kanas City, Mo., a representative for the Department of Justice’s Community Relations Services, to discuss the city’s needs. McMillen will provide a briefing of the meeting during the 5 p.m. Sikeston City Council Monday, June 29, 2020, at City Hall.
Leonna Heuring/Standard Democrat

Early this month the Sikeston City Council unanimously approved the implementation of the “Strengthening Police and Community Partnerships” program sponsored by the Department of Justice.

On Friday, Sikeston city officials, including DPS Chief Jim McMillen, along with about 10-15 members of a planning group comprised of individuals who represent different aspects and demographics of the community, met for the first time at the Clinton Building. This planning group will ultimately select the SPCP committee members. 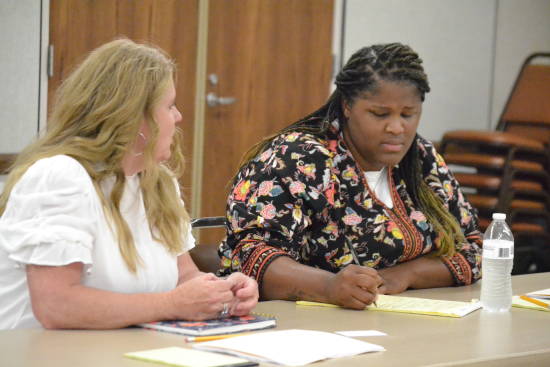 Members of planning group for Sikeston's “Strengthening Police and Community Partnerships” program sponsored by the Department of Justice chat prior to the group's first meeting Friday, June 26, 2020, at the Clinton Building in Sikeston.
Leonna Heuring/Standard Democrat

McMillen noted over time, DPS has done a poor job of interacting in the community, specifically the African-American community.

“The goal that we have today with this planning group and SPCP and the Department of Justice is to rebuild some of those relationships,” McMillen said.

The program will prevent violence, solve criminal cases and keep both the police and community members safe, McMillen said.

Those present at the Clinton Building held a virtual meeting with Rita Valenciano of Kanas City, Mo., representative for the Department of Justice’s Community Relations Services, or CRS. CRS was created by Title X of the 1964 Civil Rights Act, and Valenciano’s role is to provide mediation, facilitation, consultation and training services, which are confidential and offered without cost.

CRS addresses community tensions in response to alleged discrimination or harassment. In 2014, Valenciano assisted the City of Ferguson, Mo., working with community groups to facilitate dialogue with law enforcement and government agencies.

As part of Sikeston’s SPCP, Valenciano will help relay the community’s concerns to their superiors with the intention of mitigating a solution.

Friday’s meeting was closed to only those who are part of the planning group to ensure that all parties felt comfortable having an open discussion. McMillen will provide a briefing on the meeting during the Sikeston City Council meeting at 5 p.m. Monday at City Hall.

Lori Caldwell, who works for the Missouri Career Center in Sikeston, said she attended Friday’s planning group meeting as both a representative of the community and the economic workforce.

“I wanted to be a part of the healing and restoration process between the community, and, of course, the police force, and so whatever we can do to help bring that together, absolutely we will,” Caldwell said.

Kenny King, co-pastor of Grace Bible Fellowship Church in Sikeston and chaplain for Sikeston DPS, is also a member of the planning group. He said due to the history of tensions in Sikeston as well as the history between the Black community and police across the country, it’s important for the community to have a proper relationship now.

“It’s important to realize that we can move forward and that we have that working relationship so when you do have instances that happen — whether normal crime or a police-involved crime like the George Floyd case — the community can know: ‘OK. The police has already been working with us already.’

He continued: “They’re being more proactive than reactive, and you can squash some of the unrest. If the community knows the police already has your best interest at heart, you’re more willing to work with them than if they pop up after the fact instead. They’ve seen your face already. They know you’re there in peaceful times and not just when there’s a crime.”

Sikeston City Manager Jon “J.D.” Douglass, who was also on hand for Friday’s meeting, said implementing the program is a positive step for the community.

“It gives us hope people can get together and talk about the future of the community while working together as a community,” he said.