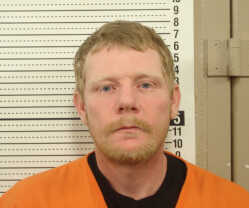 On Tuesday detectives were patrolling the area of State Highway 77 just south of the Kelly Schools when they observed a maroon vehicle with improper registration, the news release said.

Detectives attempted to make a traffic stop when Hunt accelerated at speeds reaching 98 MPH north on Highway 77. Hunt tried to make a right turn on County Road 333 but was traveling too fast. His vehicle left the roadway traveling through a residential front yard. The homeowner was standing in the front yard and had to take action to avoid being struck by the vehicle, according to the news release.

Hunt traveled east through the backyard of the residence when he exited his car and attempted to flee on foot. A detective exited and quickly apprehended Hunt.

A search of the vehicle found a glass pipe that tested positive for methamphetamine and prescription drug bottles not belonging to Hunt, according to the news release. Hunt also had a revoked driving status.

He is currently in Scott County Jail on $10,000 cash or surety bond.