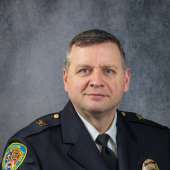 James McMillen is chief of Sikeston Department of Public Safety.

Steps are being taken for a better tomorrow

On Saturday, July 11, Mrs. Laurie Mitchell held her second annual “Stop the Violence” program at the Spread Hope Now pavilion at Branum and William Street in Sikeston. Hundreds of people came to this event in remembrance of her son, Marcus Dixon, who was murdered at this location just a short distance from Laurie’s home.

Mitchell spoke about the murder of Marcus in February of 2019 at this same location. Cornelius Perkins was arrested shortly after the incident and charged for his death. A jury trial is set for later this year. Mrs. Mitchell told me on numerous occasions that she felt led to do what she could as a mother, to honor her son that she lost to gun violence. Five months later, she was hosting the first “Stop the Violence” event.

What is significant about this event that Mrs. Mitchell continues to host each year is the fact that she, along with numerous other people from the community, are working together to stop the violence that is killing our youth. This event is centered around prayer and hope for a better future for those that live in our community. This event continues to grow, having many more attendees this year. What I noted from this affair was that regardless of color, people want a peaceful place to live. Many citizens (both Black and White), along with City leaders, came and spoke on the fact that too many people are being killed in the streets of our nation.

Also, there was a man named Mecos Neal (“Man on a Mission”), who gave a testimony to the adults and youth about his previous association with violence. Neal, from Memphis, Tennessee, gave a passionate speech on the mistakes he made in his youth. Neal said he nearly lost his own life after becoming a victim of gun violence because of the lifestyle he was living at the time. Neal told others about how many of his friends were murdered by others while he was incarcerated for a time because of the mistakes in his youth. One of the things he said stuck with me and I firmly believe; he said many of the youth may not listen to the Chief or another officer, but they may listen to someone who has been there and done that. His hope is that many of these youth can learn from the mistakes he has made in his life. I watched after his speech how officers, who were present, went up and shook his hand out of respect.

I do not know Mr. Neal but I respect what he is doing, and I admire the man. It takes strength for any of us to admit our mistakes and stand before others and profess the truth. It is hard to do the right thing sometimes. This man is putting his strength toward making our world better. Our community needs more men like Neal and more women like Laurie Mitchell. Regardless what anyone thinks about them, they are standing up and professing the truth and trying to save the lives of people in our community. They have seen firsthand where violence leads, and it leads to death.

That is where we need to put our efforts, in our own community. If I can borrow a line from Clint Eastwood’s movie … “Governments don’t live together, people do.”

If we think we will ever address any of these problems in our society, it will start in our own neighborhoods. It will start between the men, women and children (of all races) and start with people talking to one another. I keep repeating, “content of their character,” as stated by Martin Luther King Jr. That is how we should evaluate others … and you cannot do that without a conversation.

I pray that the families of victims work together and promote more events like this. I also pray that our officers continue to take the time to build relationships in our community. What is the other option? There is none. Not doing so means more people will continued to be killed. I stand with anyone who is willing to stand up and work against the killing of our youth. This will not be easy, but I heard once that “nothing ever worth having ever came easy.” And a peaceful community is definitely worth having.

More from this columnist · Chief James McMillen
Respond to this story