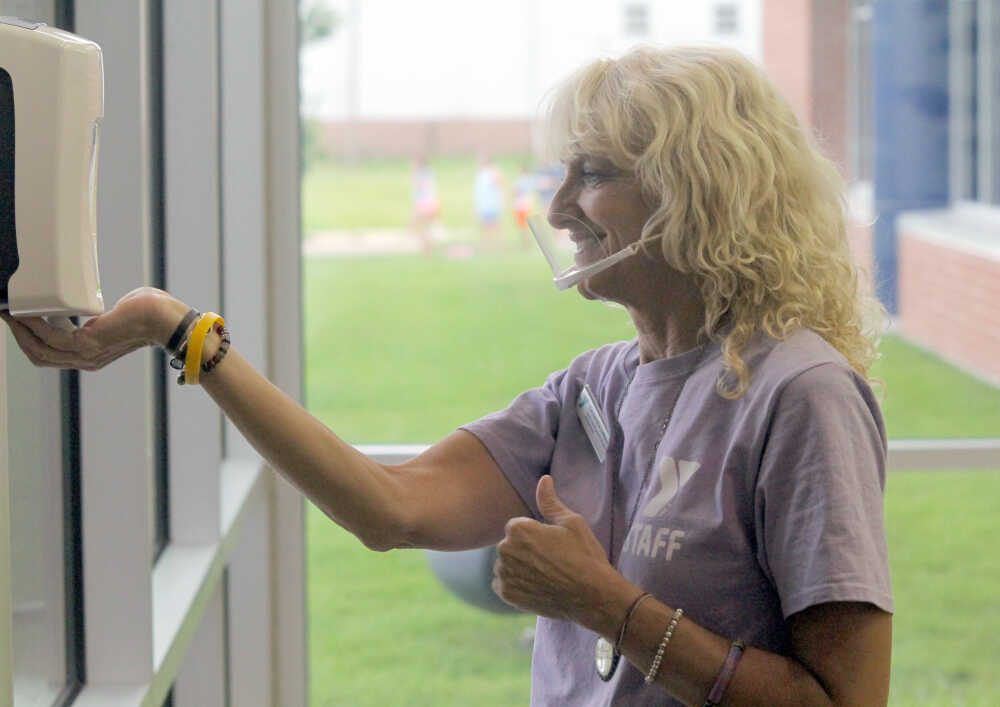 Cassandra Limbaugh, youth development director of child care for the YMCA of Southeast Missouri, uses hand sanitizer at the YMCA Thursday afternoon. The YMCA was one of the local entities to receive CARES Act funding from Scott County.
By Alex Wallner/Standard Democrat

“I feel like Scott County was very fortunate to get nearly $4.5 million of the $500 million awarded to the state,” said Scott County First District Commissioner Dennis Ziegenhorn. “Of course a lot that is all based on population.”

In late April, Gov. Mike Parson approved the CARES Act funding for each county. The CARES Act directed the Department of Treasury to use U.S. Census Bureau data for the most recent year for which data are available for population calculations under the CARES Act.

Counties began receiving the funds in May, but county officials took some time to decide how to award the funds in a fair and timely manner.

Guidelines were set from the federal government on how counties could spend the money and who was eligible for the funds. Scott County officials allowed local entities to apply for the money they needed through a multi-page application found on Scott County’s website.

“We asked for a lot of input from the people that got the money,” Ziegenhorn said. “There was a very strict application online that people can look at that tells the way the money can be spent.”

Missouri Delta Medical Center was awarded the most with $523,512.56 so they can have a COVID-19 wing in the hospital, making it easier for those with other ailments to access the hospital.

Schools also received substantial money to buy things like Chromebooks in case schools are forced to close again and students are forced to have virtual classes.

Ziegenhorn said ambulance districts purchased cleaning supplies they could use after positive COVID-19 patient rides in their ambulance.

Another thing some purchased was a thermometer that checks a person’s temperature but also photographs them and logs the time the temperature was taken to help with contact tracing if a person tests positive.

“It’s not all sanitizer that was purchased,” Ziegenhorn said. “These are things that groups needed. It wasn’t things (the commission) thought up to tell them to buy.”

There is still over a million dollars left to distribute and Ziegenhorn said there are still some applications that have been submitted the commission has not yet reviewed.

“We needed to get (the money) out because it’s for the prevention of COVID,” Ziegenhorn said. “I don’t want to get caught with a hot spot and we still have money in the bank that could help.”

Counties have until Dec. 31 to spend the money or it goes back to the federal government.

“I think we’ve taken a lot of time and effort to spend the money as wisely as we can in the county,” Ziegenhorn said.

The CARES Act Funds multi-page application is available on Scott County’s website: www.scottcountymo.com and under the “Latest news” section.