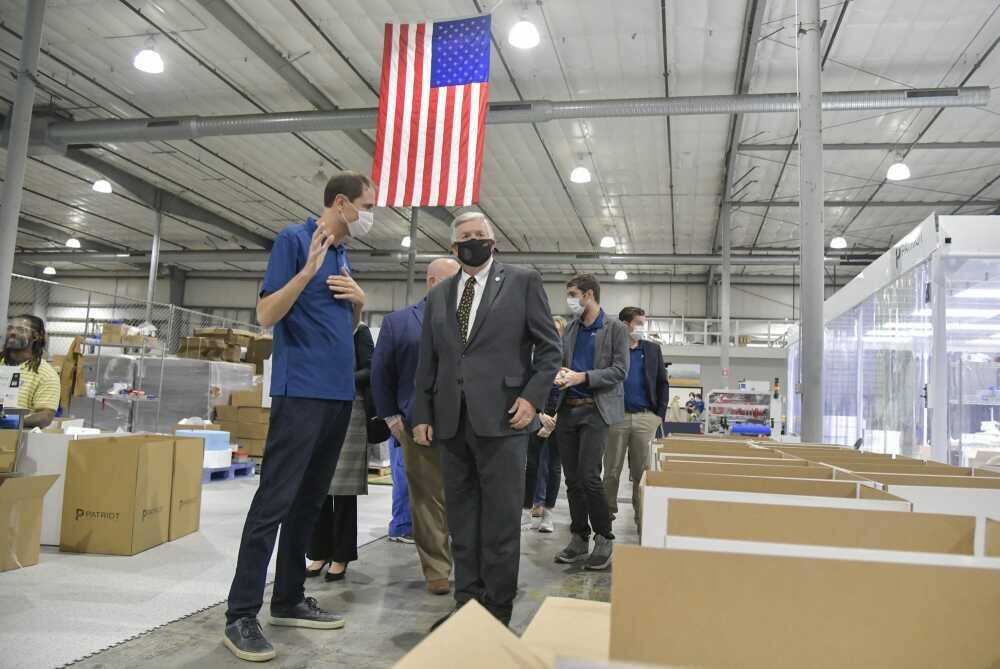 Gov. Mike Parson, fresh off his decisive election victory Nov. 3, was in Cape Girardeau on Wednesday to view the new Patriot Medical Devices facility and to repeat his philosophy of “personal responsibility” for dealing with COVID-19.

Once again, Parson said no to the notion of a Jefferson City-imposed requirement for all Missourians to wear a face covering.

“There is no way I believe you can do a statewide mandate that’s fair to everybody in the state,” said Parson, speaking at the start of a three-city tour that also took him to manufacturing facilities in St. Charles and Washington, Missouri.

“We can now make several million masks per month,” Needham said, “with the number depending on whether we run two or three shifts,” adding Patriot’s preference is to hire military veterans.

Parson said he is acutely aware COVID cases have ramped up significantly in recent weeks.

“The numbers are going up at a much faster pace than anybody expected,” said Parson, 65, who himself recovered from COVID in September, along with his wife, Teresa.

“If you look at October, it was the highest month we’ve had since COVID-19 (began), but we already hit those numbers in November in just half a month, so they’re accelerating,” he added.

Parson remains firm his administration will not change its approach despite being urged by the Missouri Hospital Association to take a stronger line on masking.

“You have to take personal responsibility on yourself,” he said.

“Government is not going to be able to regulate where everybody goes and what everybody does,” Parson added.

“We’re going to put out some new guidance at the local level, including what to do if you’re in a virus hot spot,” he said.

“Everybody wants to talk about a mandated mask, (but) it’s not just masking we need,” Parson continued.

“Social distancing, avoiding large gatherings and washing your hands are just as important as a mask,” he said.

“If you’re not staying 6 feet apart and you are hanging around people for hours at a time, you’re going to spread the virus — it’s just that simple,” Parson added.

With the Thanksgiving holiday approaching, Parson, who ascended to the state’s highest office upon the resignation of Eric Greitens in 2018, spoke personally.

“My in-laws are in their 80s and have health problems — and we’ve talked to them about how we’re going to handle Thanksgiving,” he said.

Parson added it’s up to Missourians to “use common sense” when gathering with family, suggesting the meal could be held “in different stages” and might involve a smaller group of people than usual.

“Once the door in your house comes open, that’s your house, not the government’s house,” he added.

Parson said he believes a vaccine will be available for essential workers in December or January but that it likely will be spring before it becomes available to the general public.

“With Pfizer having a manufacturing plant in St. Louis, we hope we’re first in line to get it,” Parson said, adding he expects states such as North Dakota (which just this week enacted a statewide mask mandate), South Dakota, Iowa, Illinois, Kansas and Nebraska will also be high on the Centers for Disease Control and Prevention priority list.

“We’re in the eye of the storm here in Missouri,” Parson said, “and we all have to do a better job,” echoing his plea for state residents to take personal responsibility and use non-pharmaceutical means to fight COVID-19.