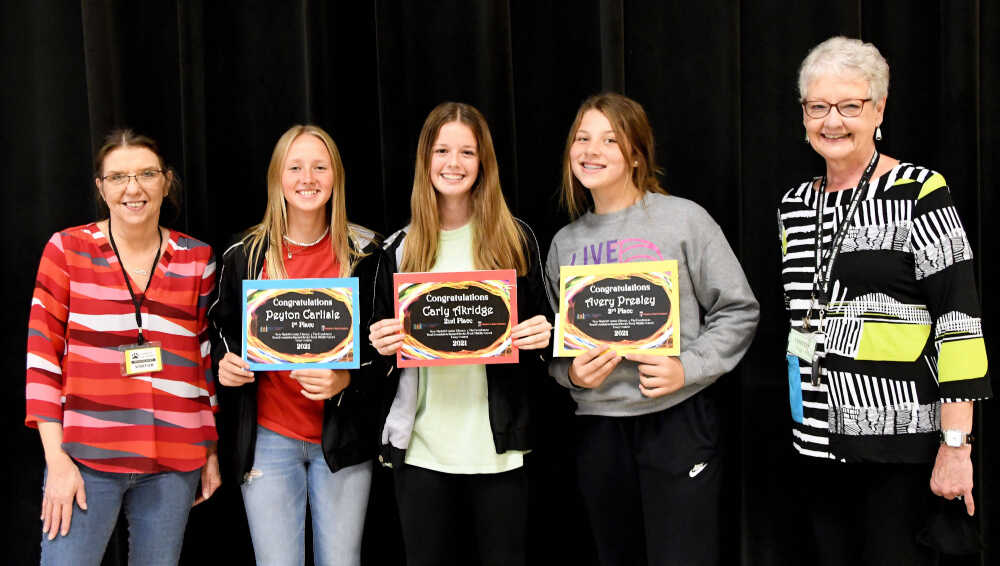 As part of Banned Books Weeks 2021, which was observed Sept. 26 through Oct. 2, the Library System invited New Madrid County middle school and high school students to write essays based on the week’s theme, “Books Unite Us. Censorship Divides Us.” Winners were announced Oct. 1.

Earning top honors and $100 in the middle school competition was Peyton Carlisle of Risco. Risco students also swept second and third place with Carly Akridge receiving $75 for her second place essay and $50 presented to Avery Presley as the third place essay. 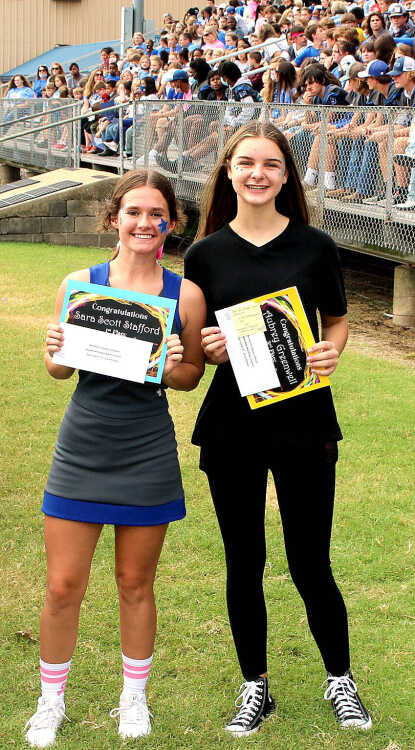 In the high school division, the three top essays were submitted by Portageville High School students. Sara Scott Stafford was the recipient of $100 for her first place essay. Bailey Whittemore received $75 as the second place winner and Aubrey Greenwell earned $50 for her third place essay.

For example, “Things Fall Apart” by Chinua Achebe was put on the banned list of Texas schools. It was banned for racism and the topic of suicide. At the same time people in different continents are studying the book.

Authors write books for people to read or to spark their imagination. One example is Harry Potter, “a pastor at St. Edward Catholic School in Nashville” wanted it banned. He wanted it banned for mainly the reason of “witchcraft and magic.” He later took the books out of the school’s library. He did not like how the book uses real spells and curses. He thought it would awaken the evil spirits if a human read them aloud.

Other authors also write books to inform you and teach you things about the past or present. “Beloved” was a diary of “a woman who kills her daughter rather than allowing her to endure the horrors of slavery.” Despite this book being called “inappropriate and disturbing” by critics, many English teachers choose this book as a favorite.

Authors spend a lot of time researching. When we ban books not only are we taking it away from others who might want to read it, but we are taking the author’s hard work away. Whether there’s a book you like or not, everyone should have a right in this free country to choose if they want to read it or not. If you don’t like a book, then stay away from that book. Everyone controls their actions.

Books unite us because books can give us inspiration, imagination, and inform us about important events. We can learn so much from their pages. Censorship divides us because we can not learn about our past. We can not learn about the world or study different cultures. We would not know a lot of the things we do without books. If someone wanted to ban a book because of something they were offended by, would there be any left?

The origin of history began with writing. Early civilizations engraved on caves, following with stones, and everything in between until evolving to expression through lines on paper. The fact of it is, we have learned who we are and how we have lived based upon these writings. The books of today are similar in the same aspect. Many continuously learn our history from first-hand accounts of experiences they can only imagine. However, if we censor books, we will block these opportunities for future generations.

In “Anne Frank: Diary of a Young Girl,” the readers live through Anne’s experience of being a Jewish girl during WWII. (Sergi). This book began being censored from the Virginia school system in 2010 (Sergi). Books such as these are one of the few things that will keep history alive. There are currently only about sixty survivors from the Holocaust that lived through that tortuous time first hand (Sergi). This means there’s going to be a time where we will have no more first-hand survivors and only writings like these will exist. Younger generations are in need of understanding the depth of actions from the past in order to prevent the repeating of history. Censoring books with this content will, in turn, decrease knowledge and understanding for the future.

With our knowledge of history being taken away, you are also losing truth. Banning books takes away the raw reality of the world we live in and the problems that need to be solved. In “The Hate U Give,” you see how just four years ago we were dealing with police brutality and racism; we are still fixing these problems today. Our future generations need to be exposed to this kind of material. It was banned for its “bias and prompted an anti-police message” (Krug). I know that we want to protect young kids and maintain their innocence for as long as we can, but kids are already losing their purity to social media usage. The average age for kids being exposed to inappropriate websites is thirteen nowadays (Fight the New Drug). This organization claims that it is almost impossible to shelter children from this kind of exposure today; at least with book exposure, they can start understanding right from wrong. In order to change the reality of our world, they first have to know and understand it.

Books also teach you life lessons. In “To Kill A Mockingbird,” the main characters learn that they should not judge people based on anything other than their character. In a generation surrounded by acceptance, you would think that this is the kind of positive exposure that would be wanted for the younger generation to learn early on. It is obvious that this book does use some terrible racial slurs, and it makes sense why parents do not want their kids reading them; however, there can be a positive outcome for these repulsive words being used. Uncovering these sensitive topics opens up conversations that are essential in learning and developing a student’s conscience. If we don’t have these conversations, how are kids going to understand why we shouldn’t use those words? After all, everyone has to be taught by someone in order to learn - these kinds of books are the key to teaching.

The future of our society is determined by these children. We cannot expect change if we are not providing them with the information to do so. Banning books will destroy the future. We are taking away access to history, the truth, valuable life lessons and the key to difficult conversations. Censoring books will not protect these kids, it will only make them naďve. If we want change, books are the way to achieve it. Former Harvard President Charles W. Eliot once said, “Books are the quietest and most constant friends of friends; they are the most accessible and wisest of counselors, and the most patient of teachers.” Books can teach us valuable life lessons and wisdom that cannot be taught. Be censoring books, we are taking away the ability to grow the minds and intelligence of children; which is the opposite of helping them. Kids do not stay innocent forever. Providing the tools to be knowledgeable and wise about the real world is mandatory for positive progression in the future.