Making child's ride a safe one is a cooperative effort 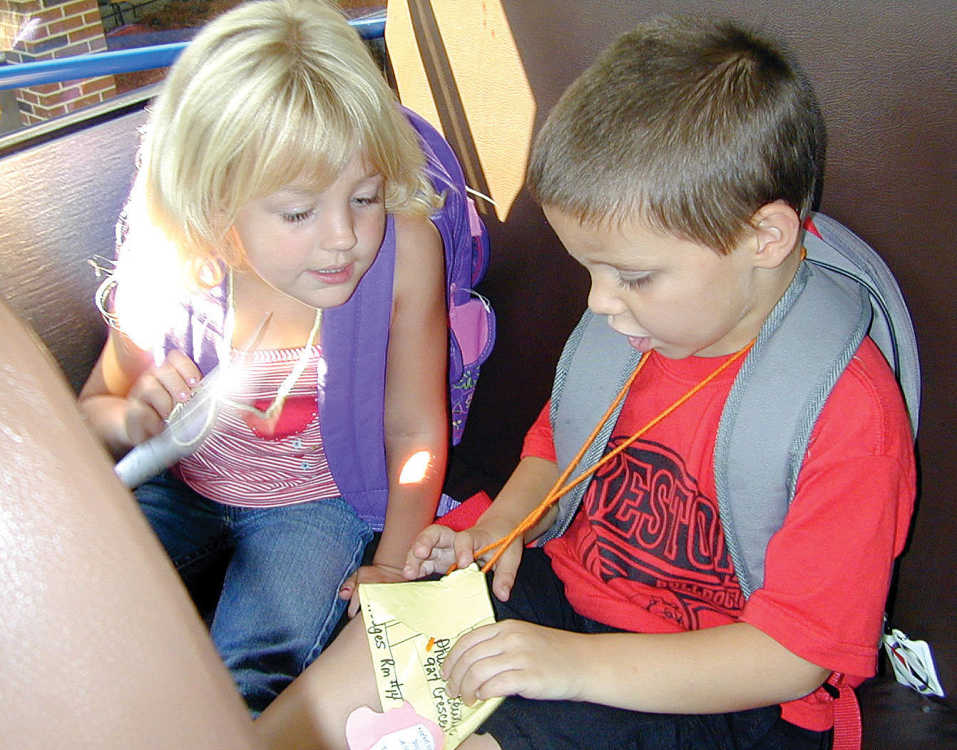 Sikeston R-6 kindergartners sit patiently while their school bus loads to take them home after school. School and highway officials say there are several things students, parents, drivers and other motorists can do to ensure safety for children who ride school buses. (Photo by Leonna Heuring, Staff)

SIKESTON -- National School Bus Safety Week isn't until October, but local school transportation and state highway officials agree the new school year is a good time to remind everyone of the roles they play in school bus safety.

"People need to pay attention. Students are a valuable commodity we're carrying out there, and they're irreplaceable," said Steve Douglas, transportation director for the East Prairie R-2 School District. "It takes a special person to drive a bus."

"Bus drivers have to be able to deal with the students. I tell our drivers, 'If you don't care about children, you don't need this job,'" Gibson said.

Gibson trains the new bus drivers in the Sikeston school district. He also said he and the transportation director conduct evaluations where they follow drivers from time to time to ensure they're driving properly.

Bus safety is also something that can be practiced by parents and their children, Gibson said.

"We need cooperation from parents to get the kids on the bus safely," Gibson said.

Most of the students are at bus stops by themselves, Gibson said. It would be nice if parents would take turns waiting with the children at the bus stops, he said.

"The main thing is to get the kids to the bus stop on time. Get there five minutes early," Gibson said.

"At so many of these stops, children are running back and forth on the street," Gibson noted.

If students get too rowdy when riding the bus, the driver can find a safe place and pull over, Gibson said. If they can't get the children settled down, drivers can call the principal and take names of student misbehaving.

"We have had situations where kids get real rowdy. We do the best we can. It can be hectic sometimes," Gibson said.

Both Douglas and Gibson said their buses also have surveillance cameras on them, and if needed, adult bus monitors can ride when issues arise.

"We're doing our best. Parents cannot get on the bus. If they've got a problem with the driver, call the transportation director's office," Gibson said.

Douglas said his district's biggest issues aren't on the buses.

"We don't have those problems. Our greatest concern is getting those kids on and off the bus," Douglas said.

Highways 80 and 105 are huge issues for the East Prairie district because many stops are made on those rural roads which are also heavily traveled.

Like most schools, Sikeston and East Prairie educate the students about bus safety.

Douglas and Gibson said motorists, in general, should just be on the lookout when driving, especially in the mornings and afternoons.

"Be aware of that bus. If you see the bus light's, that bus is loading or unloading," Gibson said. "Pay attention. When you see a big yellow bus in town, please slow down."

All motorists need to remember state law regarding school buses, according to Missouri State Highway Patrol. Missouri law states on a two-lane road, if a school bus is stopped and displaying warning signals while loading or unloading children, drivers must stop when meeting and following the bus. However, it is only necessary to stop on a four-lane highway when following the bus.

Drivers should be alert when they see a stopped school bus. Children may not be aware of traffic and dart unexpectedly into the road.

"Last year, five people were killed and 631 were injured in school bus crashes. Missouri experienced 1,158 traffic crashes involving school buses," said Col. James F. Keathley, superintendent of the Patrol. "Drivers must stay alert at all times, but especially in areas where schoolchildren are traveling to and from Missouri's schools."

It is important for parents to emphasize safety to their children, Keathley said. Teach them to pay attention to vehicles and their drivers. Make sure a child wears a helmet and knows the proper hand signals for bicyclists, he said.

"By working together, communities can help our children travel to and from school safely," said Keathley. "Our children are our future. Let's protect it."