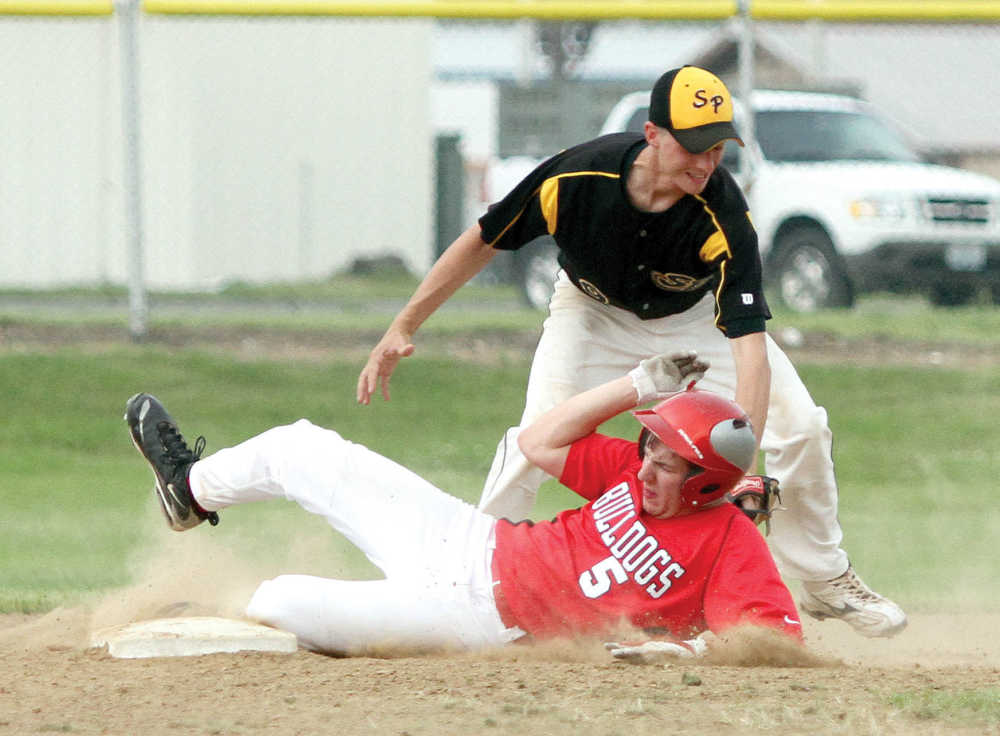 Sikeston's Kai Lambert slides under the tag of South Pemiscot second baseman Jordan Wagner with a stolen base in the sixth inning Friday afternoon at VFW Memorial Stadium. (Photo by David Jenkins, Staff)

SIKESTON -- Sikeston sophomore Luke Keefer only had one at bat but he made it count.

Keefer, batting for himself after being hit for the previous innings, sent a 3-1 fastball soaring over the scoreboard in left field in the bottom of the fifth inning, putting an exclamation point on the Bulldogs' 9-3 win over South Pemiscot Friday afternoon at VFW Memorial Stadium.

"I got a pitch I liked and the wind was blowing out and that helped a little bit," Keefer said. "It was a hitter's count and I just centered it."

The home run was the first of Keefer's high school career and gave Sikeston an 8-1 lead, after momentum had seemed to be shifting toward South Pemiscot.

"(South Pemiscot) was scoring and it answered their score from the inning before," said Sikeston coach Kevin Self of Keefer's blast. "That's important that once you get in the middle part of the game you have to continue to score."

With a brisk wind blowing out, it looked as if scoring would not be a problem, however, both starters had different ideas. Jordan Williams got the start for Sikeston and used a double play to get out of a jam in the first before breezing through the next two innings.

South Pemiscot started senior Tyler Thompson, who struck out five Sikeston batters in the first two innings, allowing only one hit before being replaced by Ryan Nolen in the top of the third.

"(Thompson), had he went seven, it would have been a different ball game," Self said. "He's a dandy. Once he went out, we went to whacking."

Sikeston greeted Nolen with six runs on four hits in the third to take control of the game. Nathan Rodgers drove in two with an RBI single, followed by an RBI single from senior Jason Isaacs. Ross Bohannon later singled with the bases loaded, scoring three and putting Sikeston out in front 6-0.

"That changed the whole game," Self said of Sikeston's third inning as all six Bulldogs runs came with two outs in the inning.

South Pemiscot answered in the top of the fourth when Cameron Lincks led off the inning with a double, was sacrificed to second and scored on an Austin Wagner single. The inning could have been worse with runners on second and third and only one out, but the a botched squeeze play turned into a double play as Wagner was tagged out trying to return to third and Harley Grimes was caught straying to far off second.

"They made some baserunning blunders we took advantage of and that got us out of innings," Self said. "They could have gotten more runs in (the fourth inning) but they didn't. Second and third with one out and a guy thinks he's got a squeeze and we got him and the other guy drifts off to far and Tyler makes a great throw, doesn't hesitate and throws him out."

After Keefer's home run in the bottom of the fifth gave Sikeston a cushion, South Pemiscot refused to go away, scoring two unearned runs in the top of the sixth, chasing Williams from the game.

"(South Pemiscot) kept swinging," Self said. "They had some guys that could hit too. Their two, three and four hitters are pretty good players. In the end we were able to make plays."

Kai Lambert came in to relieve Williams with two outs in the sixth and got a strike out to end the inning. After Sikeston added an insurance run in the bottom of the sixth, Lambert shut the door on South Pemiscot in the top of the seventh to seal the victory.

"Jordan threw the ball well and made them hit it," Self said. "I thought he's thrown well his last two or three outings. As long as we continue to get good starting pitching we have a chance to win."

Nolen picked up the loss for South Pemiscot, giving up six runs, five earned in one inning of work. Jordan Wagner pitched two innings, allowing two runs on two hits while Jordan Carter pitched the sixth, allowing one run on one hit.

Sikeston had eight hits in the game, with five of them coming from the final four spots in their order, led by Bohannon's 2-for-2 effort.

"The kind of (pitcher) that doesn't just blow it by you, hits his spots and changes speeds, that's when the lower part of our lineup will hit and they did today," Self said.

Sikeston (15-7) will be off until Tuesday when they host Graves County, Ky. The Bulldogs will finish off the regular season Wednesday when they host New Madrid County Central and then will begin district play Saturday at Poplar Bluff, taking on North County at 9:30 a.m.

"I thought we played well at times today, but we still made several mistakes," Self said. "We made several errors that we've got to clean up when we get to district time."