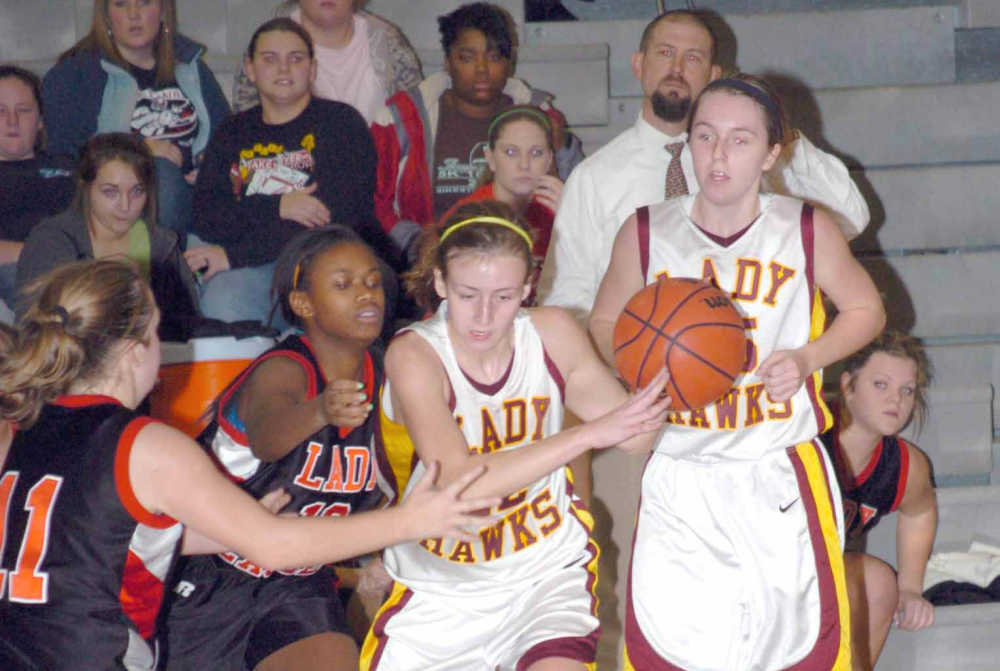 BENTON -- Moving over the .500 mark on the season, the Kelly Lady Hawks took down the visiting East Prairie Lady Eagles Monday night to improve to 3-2.

Able to hold the Lady Eagles to six points in both the first two quarters, the Lady Hawks built a 13-point lead at the half before going on to a 55-38 win.

Building a 13-6 lead to start the second quarter, the Lady Hawks were able to keep adding to it despite going 2 of 9 on free throw attempts.

After opening up with back-to-back baskets by Heather Miller and Caitlyn Harwell in the first two minutes to cut their deficit to three, East Prairie was only able to connect on two free throws through the rest of the frame while Kelly went on a 12-2 run to enter halftime up 25-12.

Coming out strong in the third, the Lady Eagles were able to slowly chip away at the Lady Hawks' lead getting to within nine points with under three minutes to play in the quarter when Nicholson capped a 6-2 run making a pair of free throws.

Unfortunately for East Prairie, Kelly's Karlie Ashcraft connected on her own set of free throws with only four seconds left in the third to push her team's lead back to 11 and the Lady Eagles were never able to get any closer as the Lady Hawks outscored them 19-9 in the fourth.

"I think we worked (together) really well," Kelly's Kristen Powell said. "We passed (the ball) around a lot more than we have been. We got our shots in and we seemed more relaxed instead of being so timid."

Powell's 12 points on the night put her second on the Lady Hawks in scoring, topped only by Bridgette Chandler's 16.

With Nicholson still taking most of the shots for East Prairie, Lady Eagles head coach Steven Douglas hopes to see more girls getting involved in the offense.

"The thing is we're still looking too much to Jennifer to do something and the other girls have to help," said Douglas. "At the end there was three white shirts guarding (Nicholson). Somebody has to be open and they still haven't stepped up and taken that responsibility."

Another problem for East Prairie was their struggles at the line, going 8 of 23 on the night.

"At the end we didn't hit out free throws," Douglas added. "We lost by 17 and we missed 15 (free throws). That's unfortunate, but I still thought our second half effort was good. "The first half was not and we just have to keep building on that and try to be better."

Now at 0-5, East Prairie will host the Woodland Lady Cardinals tonight at 6 p.m. still looking for their first win of the season. Kelly will take the rest of the week off before taking part in the Lady Royals Christmas Tournament at Twin Rivers starting Saturday.