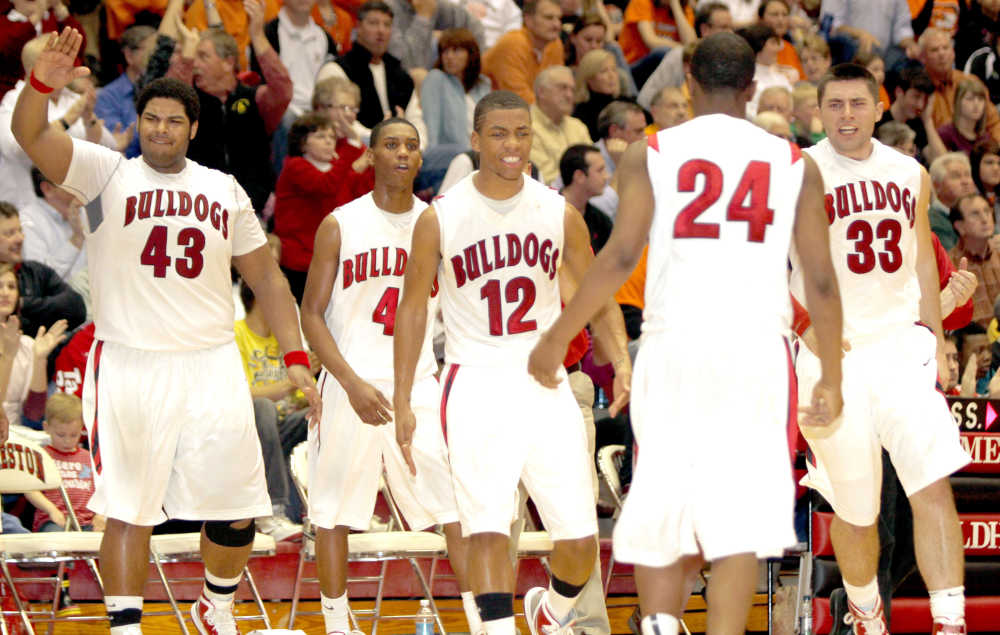 Sikeston seniors Corey Porter (43), Darryl Howard (12) and Will Holifield (33) along with junior Eldridge Gibson (4) come off the bench to celebrate a 12-2 run in the third quarter with teammate Vashawn Ruffin (24) in Sikeston's 75-57 win over Cape Central on Friday night. (Photo by David Jenkins, Staff)

SIKESTON -- In one of the most anticipated games of the high school season, the Sikeston Bulldogs rose to the challenge once again.

Facing off against Cape Central in a pivotal SEMO Conference matchup Friday night, the Bulldogs simply overwhelmed the bigger Tigers with quickness and speed in a game that was never in doubt as Sikeston rolled on Senior Night to their 46th straight home victory.

With the win, the Class 4 No. 1 ranked Bulldogs also clinched at least a share of the SEMO Conference regular season title for the fourth straight year. Sikeston can win the conference outright with a win at New Madrid County Central on Tuesday.

The Tigers entered Friday's game as one of the hottest teams in the area, coming in state-ranked in Class 5 and having won 10-straight bolstered by the addition of standout transfer guard Curtis Branch.

But the Bulldogs' defensive pressure and fast-paced tempo proved to be too much for the Tigers to handle.

"I thought our energy was good and we set the tempo early," Sikeston coach Gregg Holifield said. "They're a really good basketball team and we knew we would have to play well to beat them. Fortunately we came out in the first quarter and really set the tempo and played well."

The Bulldogs (21-0, 6-0 SEMO Conference) controlled the game from the opening tip and never looked back, jumping out to an 8-0 lead after two 3-pointers by Darryl Howard and Terry Jamison and then an offensive tip-in by Janeil Hatchett.

"You've got to give credit to Sikeston -- they're a very good ball club," Cape Central coach Drew Church said. "They've got 10 or 11 guys that can flat play. They put the intensity on you on the defensive end and they're very good at running the floor and they shot it extremely well tonight. They shot it way better than I thought. They had several guys hit multiple 3's."

The Bulldogs, well known for creating turnovers and scoring in transition, oftentimes surprise teams with their perimeter shooting, as they buried 9-of-24 from 3-point range in the game, making things that much more difficult for the Tigers.

Sikeston quickly opened up a double-digit lead at 14-4 after a Will Holifield 3-pointer and led 18-8 on a Kil'Ron Coleman baseline jumper.

The Tigers' Andrew Williams hit a 3-pointer late in the first quarter to cut the lead to 18-11 after one.

The Bulldogs hit four 3-pointers in the first quarter alone.

"That opens it up, especially against a team that has that length inside," Holifield said. "It allows us to spread people out a little bit. We've got some really good shooters and that makes it a whole lot easier offensively when you do have people that can put it in the hole from the 3-point line."

Cape Central (17-4, 4-1 SEMO Conference) managed to cut into the Bulldog lead in the second quarter, getting as close as 26-21 on two Zach Boerboom free throws with 4:15 left in the half, but they would get no closer the rest of the way.

Sikeston sophomore Vashawn Ruffin answered with a 3-pointer as the Bulldogs closed the half strong to lead 38-26.

Church indicated the Sikeston's pace had already taken its toll on the Tigers.

"When you play Sikeston they get you to speed up," Church said. "They get you to play fast. We didn't want to stall or play any slow tactics, but I wish we could've slowed down in the halfcourt and got the ball inside. When you're going against a team like that, it's hard to simulate that in practice. But hopefully now we can understand just how tough and how much like warriors we gotta be when we play a team like Sikeston."

The Bulldogs reached their biggest lead of the night on one of the most exciting plays of the night as Howard stole the ball, but had to save it from going out of bounds to Hatchett, who then fired a perfect no-look pass back to Howard streaking in for the layup to extend the lead to 64-41 to punctuate the victory.

The Tigers got no closer then 16 points the rest of the way.

Sikeston recorded 18 steals in the game as they forced 26 Cape Central turnovers.

Sikeston was just 26-57 (46 percent) from the field overall, but were helped by 11 offensive rebounds.

Hatchett led the team with 10 rebounds, six on the offensive end. He also had 12 points, five assists and three steals.

Howard led the Bulldogs with 15 points, to go with his four rebounds, four assists and six steals.

"They're so long and athletic and they give a lot of teams fits and trouble," Holifield said of the two seniors. "Fortunately we were able to get on the boards with them."

Will Holifield had nine points, all on 3-pointers. Fellow senior Corey Porter had 14 points.

James Lane, one of the Tigers' four 6-foot-5 front-line players, led all scorers with 22 points, 10 of which came in the fourth quarter.

The 6-foot-5 Williams, who hit six 3-pointers in the Tigers' 76-55 loss to Sikeston in the SEMO Conference Tournament championship game in Dec., hit four 3-pointers en route to a 12 point night on Friday.

"Sikeston covered him a lot better this time," Church said. "Andrew's going to hit some 3's, but they did a good job of making him penetrate. They get a lot of touches on the ball."

T.J. Tisdell, another 6-5 player, finished with 10 points for the Tigers.

Branch was held in check all night as he was hounded and pressured by Sikeston's guards. He finished with nine points, all on 3-pointers and was forced into numerous turnovers.

"There were times tonight when he tried to do a little too much and that played into Sikeston's favor," Church said of Branch. "Tonight he was a little frustrated, he had some turnovers. A lot of times tonight they had two guys on him and trapping him. That kind of puts him in a tough spot, especially if some of the other guys aren't getting to a spot where he can throw it to them. But it's good for him. This is all a great experience that will help us in the future."

With a 72-55 victory over Cape Central, the Sikeston J.V. team improved to 18-0 on the season and 6-0 in the SEMO Conference to clinch another junior varsity conference title.

The Sikeston junior varsity has now won 46 straight games dating back to two seasons ago.

Sikeston led 15-10 after one quarter and 35-25 at halftime. They extended the lead to 52-38 heading into the fourth quarter.